The girl band’s stylists even worked closely with the waxwork team to perfect the figures, which are wearing the clothes that were worn in the music video for Little Mix’s 2019 hit Bounce Back.
Little Mix have taken another stardom-related step forward, after being immortalised in wax figure form by Madame Tussauds London.

Perrie has called the waxwork artists “fantastic”. “Our figures are so lifelike that it really could be us standing in the attraction,” she added. “We’re so excited for our fans to see us in Madame Tussauds London and loved that some of them could be there to see the unveiling of the figures.”

Fans have freaked out online about the extraordinary likeness between the wax figures and the girls IRL – but that’s not all that they’ve noticed. 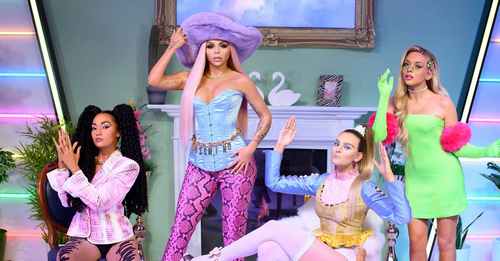 When Leigh-Anne took to Instagram to promote the artwork, she included pictures of her, Perrie and Jade’s figures and not Jesy’s, who departed from the girl group at the end of last year and announced she had signed a solo contract back in May.

Mixers have come down on both sides of the issue, with some taking offence at the omission on Twitter (​​”Just because she has left the band, it doesn’t mean she should be left uncredited after everything she did for the group”), while others felt that it’s fair since Jesy is no longer a part of the band.

One tweeted: “Leigh-Anne isn’t being shady. Something tells me legally or per Jesy’s request in private she asked them to not post about her because she is no longer in Little Mix.”

Leigh-Anne has called the unveiling of the figures “a dream come true”. The figures are amazing, and the Madame Tussauds London artists have captured us perfectly,” she said.