They’re staging a “die-in”, which involves lying on the pavement in puddles of fake blood and shouting “”you choose profit over planet, profit over people, profit over our future.” It’s meant to represent the blood on the hands of the fashion industry, which has come under fire in recent years for its contribution to the global environmental crisis. 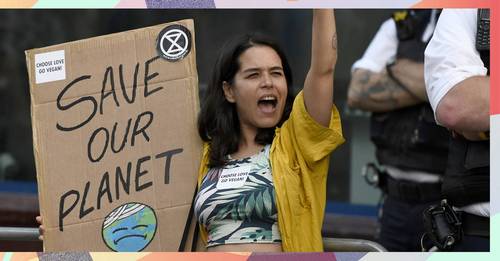 Today is the first day of London Fashion Week, the bi-annual event which showcases the fashion collections for the upcoming season and hosts some of the world’s most eminent fashion houses. But instead of the usual glamorous affair (glossy editors arriving in Mercedes Benz E-Class cars, impromptu street style runways and celebrity sightings) the entrance to the show space is strewn with Extinction Rebellion environmental activists.

GLAMOUR caught up with two rebels, Laura Frandsen and Sara Arnold, who are both part of Extinction Rebellion’s Fashion Action Team, to find out why they chose to join the movement as well as what they hope to achieve.

“Climate change is an emergency, yet the fashion industry isn’t in an emergency mindset,” says Sara. “Fashion weeks are a platform to showcase a lifestyle of excess and encourage mindless consumerism that’s indicative of the wider problem. Plus, there’s the impact of flying thousands of people from country to country, putting on elaborate fashion shows and polluting our cities with fleets of petrol cars.”

She’s right. Every fashion show lasts around 15 minutes, yet involves an elaborate set design, hundreds of fresh floral bouquets, bottles of water, printed show notes printed, gift bags and numerous other elements that are invariably thrown away after the show has finished. It’s a tremendous waste. And when you think that there are hundreds of shows, it becomes almost unfathomable.

“Fashion week needs to stop and fashion must be redefined. It’s one of the most influential industries in the world and not using it to communicate the global crisis we all find ourselves in is a wasted opportunity,” says Laura.

“At the moment fashion is totally out of sync with culture and reality,” agrees Sara. “And want it to start putting culture before commerce, because I don’t think anyone will care about what clothes they’re wearing when there’s no longer enough food.”

However, there’s an argument to say that the fashion industry is taking note, and many brands have acknowledged the problem and have made significant changes to try and improve their practice and lessen their contribution to the crisis. At this year’s G7 Summit, major brands like Chanel, Gucci and Nike signed a Fashion Pact, which laid out ambitious goals to reduce fashion’s carbon footprint, including changing their supply chains, using organic and sustainable materials and recycling. Just yesterday, Gucci announced they have become an entirely carbon neutral company in an attempt to tackle climate change. For Extinction Rebellion, though, it’s not enough…

“If a brand does something to lessen their impact, they somehow get the right to use the term ‘sustainable’, but doing less harm doesn’t mean they’re doing good. The level of greenwashing is staggering,” says Laura.

As with any billion dollar industry (the global fashion industry is worth £298bn), progressive change is inevitably going to be gradual, not only to promote financial stability for the sake of shareholders, but also to protect the millions of people who depend on the fashion industry for their jobs and livelihoods. But as for fashion week? “We’re having a funeral on the last day of London Fashion Week,” says Sara. “It’s for all the lives that have been lost as a result of the environmental crisis, and it’s also for fashion week itself. It needs to be put to rest.”