So, what’s the show all about? 15 guys and 15 girls live in separate houses, they date through isolated “pods” in which they can’t see each other (only hear). If they fall in love, via voice alone, they must propose to get to the next stage.

That next stage being, a honeymoon, in Mexico for two weeks, where they get to finally see each other face-to-face and become intimate. If they survive the holiday, they go back home, move in together, and meet the parents.

And *if* by some miracle, they’re still together after this, they get married. But we only find out on the final episode if they say ‘I do’, or if they get cold feet. This whole experience lasts just over a month.

If you thought Love Island was wild, that Are You The One took it too far, or that Celebs Go Dating was batsh*t, then you have no idea what’s in store for you when it comes to Love is Blind. Netflix’s latest dating show is an amalgamation of every dating show concept, ever. It’s what happens when a bunch of producers get in a room, get really really drunk, watch ‘Wife Swap’ back to back, and then brainstorm ideas. 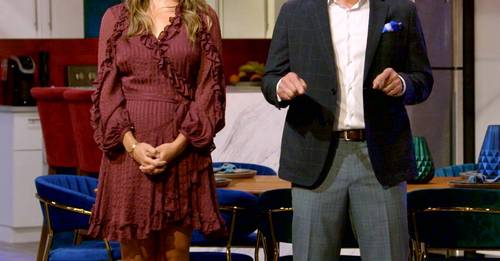 The wild part is that the premise isn’t even the wild part. It’s the cast members. Not since OG Big Brother episodes has a cast been this gripping. There’s Jessica, the Valley’s girl, who lets her dog drink red wine straight out of her glass and won’t stop going on about how much older she is than her partner (Mark), or how much she fancies Amber’s partner (Barnett). Second, on the WTF list, is Giannia – who starts off sweet-as-anything. She seems relatively normal.

Then, we see her out of the pods – where she tells her partner Damian that he’s *not* the best sex of her life and has full-blown arguments with him in front of the entire cast – I’m convinced she’s an actress, because the lines that come out of her mouth *cannot* be real. And who can forget Carlton, he may not have made it past episode 4 but boy did he make an impact. God bless Twitter, because we also discovered that he had a cameo in the Real Housewives of Atlanta.

So, why are we all so obsessed with this show? The drama is unmatched, the fact people are using the word ‘love’ after 5 days and never seeing one another is unparalleled in reality TV absurdity.

But, I think it’s deeper than that – I think it’s what society needs right now. Pure silliness. After a stressful day of worrying about climate change, coronavirus, Brexit, and whether the blue light on my phone is prematurely ageing me – all I want to do when I get home is sit down and turn on some escapist TV. Something that doesn’t require a single brain cell (and is in all likelihood making me lose brain cells).

It’s like Twitter, we know it’s bad for our insides, but it appeals to some primal need for trash – we just can’t seem to look away. The people behind Netflix know exactly what we need, whether or not it’s good for us is a separate conversation.

The show doesn’t really ask if love is blind, as the contestants all have supermodel looks (you’d be hard-pressed to find someone in the world *not* attracted to Lauren) – it asks whether heterosexual couples, in the exhausting age of dating apps, actually just want an arranged marriage – under the guise of reality TV.

Or maybe it’s just asking if love is blind, drunk. Given that the entire time the cast is plied with alcohol, and consistently absolutely trashed.

Lady Gaga has gone official with her entrepreneur boyfriend, so who *is* he?

Get Ready For the 2020 Golden Globes