John, a proud Bostonian through-and-through, adamantly cheered for the Boston Bruins through the Stanley Cup. Jenna, on the other hand, rooted for the St. Louis Blues.

The two traded jabs over the outcome of each game, which culminated in a video John shared on Instagram.

Nothing could shake Jim Halpert and Pam Beesly on The Office, but hockey might be the thing to break Jenna Fischer and John Krasinski. The former costars have been going head-to-head on Twitter lately, cheering for opposing teams in the Stanley Cup. On June 12, John took their “rivalry” to the next level with a well-placed prank during game seven, featuring actor David Denman, aka Pam’s ex-fiancé Roy.

“Jenna Fischer, I know we’ve been having our ups and downs recently,” John said in the video. “I just wanted to say I’m really sorry you’re not here.” Yet, as John sent his “heartfelt” message to Jenna, another familiar face stepped into frame – David, the actor behind his onscreen nemesis. She joked right back, responding, “Ha. Ha. Ha. Well played. Just be careful he doesn’t leave you at the game.” 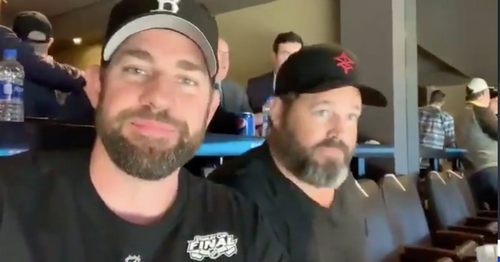 Despite John’s attempts at trolling, Jenna got the last laugh as the St. Louis Blues took home the prize at the end of Wednesday’s game. Sorry, John. The Halpert-level pranks couldn’t save you during this one.

If You’re Wondering About Those White Walker Spirals

What Is Moon, and Why Is Kendall Jenner Promoting It?

Ladies, It’s Time We Stop Putting Down Our Bodies in Front of Other Women