Following law enforcement’s inaction and lack of resistance toward these aggressive rioters, many politicians, journalists, public figures, and Twitter users have denounced the striking double standard in the handling of the pro-Trump mob compared to the response toward Black and brown protesters in the past.

Yet the actions of these two groups are not alike – one protested actual, measurable injustices in an effort to bring about change, while the other is using violence to overpower our democracy in support of a baseless conspiracy theory.

When pro-Trump extremists stormed the Capitol on Wednesday afternoon, reports surfaced of “protesters” creating chaos as Congress began counting the electoral votes to confirm Joe Biden’s presidential victory. But what took place at the nation’s Capitol on Jan. 6 was not a protest, which by definition, is a public demonstration that expresses dissent toward an idea.

The reality is that thousands of armed Trump supporters deliberately charged the building in an effort to prevent Congress from exercising their constitutional responsibility and perpetuate Trump’s false claims of election fraud. 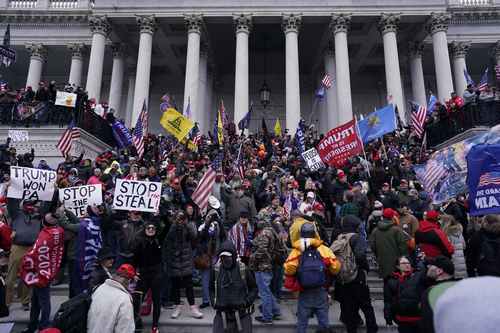 Black and brown people who participated in demonstrations over the summer to condemn racism and the unjust killing of George Floyd were tear-gassed, arrested, and shot by cops, though the protesters themselves were mostly peaceful. In fact, according to a report by The Armed Conflict Location Event Data Project, a nonprofit that researches political violence and protests, more than 93 percent of protests that took place in the wake of Floyd’s death, between May 26 and Aug. 22, were peaceful.

Despite the reports, Trump and many Republican leaders described these demonstrators as “thugs,” “criminals and vandals,” and “anarchists,” and maintained the false narrative that all participants in these protests were dangerous and violent. Trump’s response to nonviolent demonstrators was, “When the looting starts, the shooting starts.” These reactions were not only factually incorrect, they were simply racist.

Yet when it came to the violent extremists who charged the Capitol on Jan. 6, Trump described these rioters as “very special” patriots “who have been badly and unfairly treated for so long.”

Galvanized by a sitting president, these armed rioters not only broke through barricades to charge the Capitol, but they did so while casually filming and taking pictures of themselves. They proudly defaced the complex, even breaking into Speaker Nancy Pelosi’s office, as Congress members were forced into lockdown.

What was almost more disturbing than the violent acts themselves was law enforcement’s response to the attack. In stark contrast to the excessive force we saw used by police during protests over the summer, Capitol police officers met the pro-Trump rioters with little to no resistance. Cops were even seen taking selfies with rioters and carefully walking them down the steps of the Capitol. These rioters are not protesters. They forcefully and intentionally breached the nation’s Capitol, thus the criminal acts they’ve committed make them domestic terrorists, and they should be treated as such.