Most of said LED face masks have pretty hefty price tags, and *all* of them claim transformative results. So what’s the deal? Do they work? How do they work? Are they worth the money? And, um… What even is light therapy? We’re here to dish the dirt.

Unless you’ve been living under a rock for the past couple of months, you’ve likely seen all manner of celebs and influencers posing on the ‘gram in LED face masks. Victoria Beckham has done it, Kourtney Kardashian has done it and Chrissy Teigan has done it. Even Madonna has done it. And you’d be forgiven for thinking they look kinda scary.

It’s the result of light therapy becoming mainstream: once confined to the walls of only the fanciest of salons, several beauty brands are now offering light therapy devices which can be used at home. Case in point: MZ Skin, Current Body and Dr. Dennis Gross. It’s a similar journey to that of laser hair removal: technology advanced, the treatment became more readily available and IPL devices became a just-as-good at-home alternative.

What is light therapy?

We’ve already answered all of your “what is light therapy?” questions in some serious depth, so you can head over there if you want a real deep dive. But in short, light therapy is a treatment which has been around for about 30 years; it’s the process of exposing skin to red, blue and near-infrared LED light which each have varying skincare benefits. 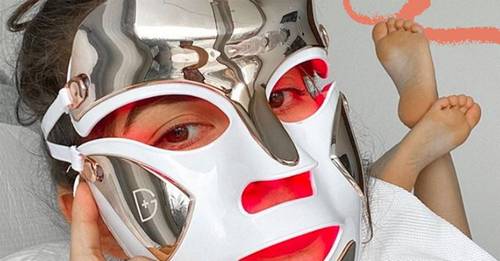 What does light therapy do?

When used regularly, LED light therapy can be used to reduce breakouts, pigmentation, rosacea symptoms, psoriasis and other side-effects of inflammation. It can also generally improve the appearance of your skin – even if you don’t suffer from the above complaints.

And the benefits go well beneath the skin’s surface. In fact, LED light treatments have been applauded for their mental health benefits, too. Client feedback suggests that a short period of time spent under in-clinic LED lamps could dramatically improve mood, lifting spirits and reducing stress levels. Need proof? LED light therapy boosts our ATP so that it can fuel other cells with energy and boost our serotonin count.

Since the results for your skin and mind are cumulative, you need to have regular treatments to see an effect. If you can’t afford regular LED treatments at your local salon, at-home light therapy could be the answer. And that’s where the best LED face masks come in.

How do LED masks work?

Blue light, Red light and Near-Infrared light all work in combination with each other (or separately) to combat various skin complaints. More on how each LED light colour works differently later…

Yes. Most experts agree that LED face masks are safe – since they’re non-invasive and don’t emit UV light – as long as you follow the instructions, use them for the recommended amounts of time only and protect your eyes.

The LED used in at-home devices is much weaker than what it would be in-salon, and actually, the devices often undergo much more rigorous testing because they need to be safe enough to use without the presence of a professional.

To ensure your safety, never buy an LED face mask that hasn’t been FDA improved.

In terms of their effectiveness, it goes without saying that at-home treatments are never going to be quite as safe as in-salon options. That said, these at-home LED face masks give the pro-grade contraptions a good run for their money.

What colour LED do I need?

Blue light: this is the bacteria-fighting LED light. It triggers photochemical oxidation in order to kill bacteria living on the skin. This makes blue light an excellent choice for those with acne, eczema or rosacea.

Near-Infrared: has no colour but it can be used to reduce inflammation and redness in the skin. It also speeds up wound healing and reduces pigmentation.

Amber: Amber LED light is the least common in at-home devices, but works to revitalise the skin, reduce swelling and boost your skin’s radiance.

What is the best LED face mask?

When choosing an at-home LED treatment, it totally depends on what you’re after as to which LED face mask to choose.

If you want something which offers an at-home facial – a complete and thorough treatment – then your best bet is the LED face mask.

That said, LED wands and smaller LED lights are beginning to trickle their way into the hands of retailers, offering acne treatment on the go for smaller prices.

LED face masks only need around 10 minutes’ of usage per treatment, while wand devices will need to be held over the skin for around 20-30 minutes (on each use) if you want to see any results over time. LED face masks are great for a slip on, sit back and relax approach, while wands and portable LED devices are cheaper but might lead to a dead arm/wandering mind.

The best LED face mask for combination skin is the MZ Skin Light-Therapy Golden Facial Treatment Device. It retails at £385 and has been developed by Dr. Maryam Zamani: one of London’s leading oculoplastic surgeons and aesthetic doctors. It’s easy to use, should be worn for between 15 and 30 minutes and looks chic thanks to its gold covering. There are various LED light colours which can be used: red for strengthening and firming, blue for decongesting skin and fighting breakouts and green to reduce the look of hyperpigmentation. And users reported more radiant skin after just one week.

The best LED face mask for skin brightening is CurrentBody’s LED Light Therapy Mask – one of the cheaper masks in this edit. It’s £275 (usually £349, but it’s on sale rn), which is pretty good since in-house research found it to reduce wrinkles by 35 per cent in just four weeks. What’s more, 95 per cent of users of this LED face mask said their skin tone, texture, firmness and tightness was improved. Sold? Same.

I Started Stretching Each Morning, and I Swear It’s Helped Me Focus 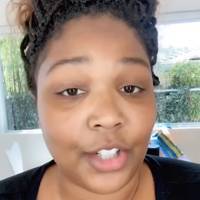