Kourtney Kardashian and Travis Barker are engaged after the Blink-182 drummer proposed on Oct. 17 in Montecito, CA. The couple, who are longtime friends but confirmed their romance in February 2021, recently sparked engagement rumors during their trip to Disneyland in July, where Kourtney was spotted wearing bridal Minnie ears. 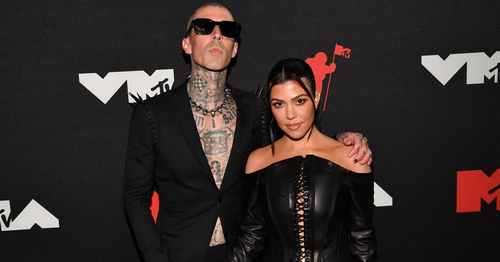 Fast forward three months, and there they were backstage at SNL, where Kourtney supported Travis during his performance with Young Thug just one day before their engagement on the beach at Rosewood Miramar Hotel, which happened in the middle of a heart-shaped rose installation surrounded by candles at sundown.

Travis, 45, and Kourtney, 42, have reportedly talked about tying the knot after developing a strong connection with their families – Travis even got Kourtney’s name tattooed on his chest back in April. Family members including Khloé Kardashian, Tristan Thompson, Kim Kardashian, Kris Jenner, and Travis’s daughter Alabama were there to watch Barker pop the question and celebrate with an intimate dinner afterwards. Check out Kourtney’s Instagram from the scene above, then get the scoop on her massive engagement ring.

Selena Gomez and Coldplay Perform Their Duet “Let Somebody Go,” and We’re Gonna Need Some Tissues

Selena Gomez’s latest song is almost here! On Oct. 4, the 29-year-old singer teased her upcoming collaboration with Coldplay on Twitter. The song is titled “Let Somebody Go” and is featured on Coldplay’s Music of the Spheres album, which dropped on Oct. 15. 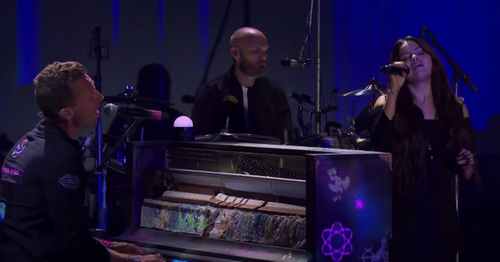 When Gomez first tweeted the news, she only gave us a 15-second teaser, but it sounded like the track would definitely have us in our feelings. And wow, that was an understatement. Last night, on The Late Late Shows with James Corden, Gomez and Coldplay performed it live for the first time “anywhere in the world,” announced Corden, and well, we are not OK (especially since it’s only been a week since Adele turned us into emotional wrecks with her new single “Easy on Me”). “When I called the mathematicians and I asked them to explain / They said love is only equal to the pain,” Gomez and Chris Martin sing. Can someone please hand us a box of tissues?

A release date for the song hasn’t been announced yet, but given that Coldplay’s album is dropping soon, it’s only a matter of time. Listen to the full live performance above.