When Sarah is suddenly plagued by a string of lucid visions so surreal that she can’t tell her dreams from reality, we’re taken along on her haunting and emotional journey – one that encourages us to help Sarah distinguish what’s real and what’s in her head, exhibit empathy for her struggles, and reflect on our own self-truths.

Horse Girl delves into mental illness and psychoticism so deeply that the audience has no choice but to trip right along with Sarah – candidly, I wasn’t nearly high enough to grasp some of the more conceptual scenes.

The day before Horse Girl premiered at the Sundance Film Festival in Park City, UT, I spoke with Alison Brie about what is arguably her most transformative role yet. As it turns out, it is also one of the most personal.

She has a roommate (played by Insatiable‘s Debby Ryan), who doesn’t quite understand her, and a close coworker (Molly Shannon) who tries her best to.

Britt Stephens: How did you come upon this project, and more importantly, how did you get into this woman’s head?

Alison Brie: Well, the impetus for the story is quite personal to me. I have worked with [Horse Girl director] Jeff Baena on other movies, and we’re close friends. I actually came to him with this idea about a woman with a family history of mental illness who starts having weird dreams and has trouble discerning what’s real and what’s in her mind.

And I have a family history of mental illness; my grandmother lived with paranoid schizophrenia, and I grew up hearing all these stories about that through my mother and her fairly traumatic childhood. So, I’ve always been fascinated by and very empathetic to it. My mom has always joked, “When you make the movie about my life, you should put this in it.” She’s going to be very disappointed [laughs]. I keep trying to prep her, like, “Well, it took a turn.”

This is definitely a departure and not as literal as a story as I thought I would make. But as I analyzed it more and more, I was drawn to the narcissistic part of how it relates to me and my personal fear of having mental illness in my bloodline: how would I know if it were coming on – or would I know? Would I have the awareness, or would I have this lack of trust in my own brain? And that, to me, seemed very terrifying and like a cool premise for a very thoughtful character-driven thriller, I think, that has a lot of empathy for its main character.

We had goals to make something where the audience is really going on the journey with the character rather than looking at her from the outside. There’s such a stigma involved in looking at people with mental illness, and we were not trying to make a mental illness movie – but we just really wanted people to be in her head and not judging her. We want the audience to also feel uncertain and not know what’s real and isn’t real.

BS: And that’s how it felt, 100 percent. Honestly, I still don’t quite know what’s real and isn’t real in Horse Girl. And with Sarah’s family history of mental illness – well, I have similar history in my own family, and once you find that out, you just inherently are like. . .

“We want the audience to also feel uncertain and not know what’s real and isn’t real.”

BS: Exactly. And Sarah has many layers, but she’s also experienced a lot of trauma. I want to talk about the relationship she has with Molly Shannon’s character, Joan – at first you think, “Oh, this is just a friend, a coworker.” And then you realize that Joan is truly more of a mother figure; it feels like she’s the only person truly trying to understand what Sarah is going through. How did you and Molly play to that bond?

AB: I just adore her. She’s game for anything. And when we talked to her about it, we said exactly that. She is a bit of a maternal figure for Sarah. Sarah has become so isolated in her life. She’s very much alone throughout the whole process of this movie. And it’s what makes it so difficult for her to deal with the things that are happening to her. She has no one, and Joan is the closest person that she could reach out to and the most empathetic person once she starts to hear what’s going on.

AB: Her roommate tried. We wanted there to be a disconnect by casting someone younger, and that was something that we really learned from Debby when talking about her take on the character. She felt that her generation [Gen Z] has a lot of empathy for people and that they want to hear them out and not judge them right away. But even then, as a roommate, you’ll reach the end of your rope.

And again, to speak to Sarah’s isolation. .. she’s a really sweet girl, and we want people to be on her side. But as a roommate, well, she’s always home [laughs]. She’s clean, she’s tidy; she’s not a bad roommate. But who wants a roommate that’s always home in your space? And then starts destroying the house?

BS: Oh, I’m always home, and that’s why I live by myself – I don’t want to be that roommate.

AB: Me too. I’m always home, and I like being home alone. Or with, you know, my husband [actor Dave Franco] and my cat. 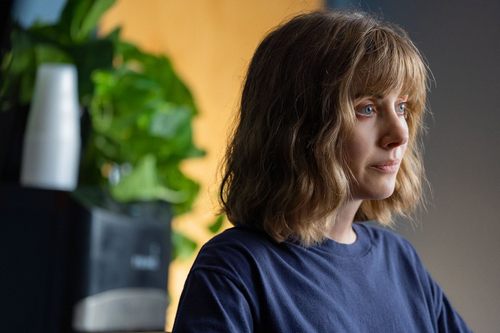 BS: I love a good therapy scene, and Sarah has this very clearheaded moment while speaking with a social worker. Suddenly she was able to articulate her struggles to someone, and at one point, she says, “I just wish that I could start over.” That line really resonated with me; I imagine we’ve all felt that way. Was that a challenging scene to shoot, or was it as cathartic as it looked?

AB: Very much both. I was nervous about that scene for the reason you just said. Up until then, things have been going so haywire, and it gets very abstract and surreal, so we need to have a lucid moment with Sarah to be like, “What’s going on?” The audience needs some information, and Sarah needs a bit of a reckoning. She begins to open up to Joan, but then she shies away from it. So this is the most candid we ever see her speak in the movie. And it’s also the most personal stuff.

Jeff came in as we were shooting that scene and said to me, “Just talk about your grandma. Talk about your mom.” Unlike Sarah, my mom is still alive, but it really is me talking about very personal things and tapping into something very real. It was a bit cathartic, and it was really fun to shoot it with Jay Duplass, who’s also one of our producers. Jay’s wife is a social worker in mental institutions and was with us on set when we shot those scenes.

BS: When he told Sarah, “I don’t believe in this, but I believe that what you think is happening is real for you.” That was so important.

AB: Exactly. It goes back to empathy. And what you then realize is the trickle-down effect of the trauma from her grandmother to her mother, and we obviously see some other big life events from Sarah’s past. And again, she just has no one. It makes me so happy to see the way that people post to social media, like, “Reach out, talk to your friends. If you’re feeling a certain type of way, talk to someone about it,” because the worst part is to go through it on your own.

BS: I think that’s what made this film so relatable. When I find myself in those lower moments, I do isolate myself.

BS: You convince yourself you don’t want to be a burden on other people, even though I know I have wonderful network of family and friends that obviously would support me. And I usually know that I just need a couple days to sit in it, and then I’ll feel better.

AB: Exactly. Let me take a day and just live in this funk. And then we see how many days go by, and if we start to get into dangerous territory. . .

BS: Then maybe I’ll text someone.

“It really is me talking about very personal things and tapping into something very real.”

AB: The Summer before writing this movie I went through a very deep depression, and it was a catalyst, because it was a deeper depression than I had experienced before, and I really started to think about my mental state. It was the first time that I had to work the hardest to get out of it; I’d drag myself to a yoga class but still tears are streaming down my face while I’m doing yoga. I’m like, “What’s up with this?” I sought out a therapist right away because I felt that same energy you’re talking about, where you feel like a burden.

BS: Do you think Sarah felt that way?

AB: Absolutely. I’m so glad that I have the wherewithal. .. a lot of family members of mine had been in therapy for years, so I’m not afraid to go to therapy or to take medication, if needed. And thank god there’s less of a stigma about that; everyone should seek people out to talk if they need to.

BS: It is, unfortunately, a privileged thing to be able to find and afford one, and a good one at that. I’m obsessed with my therapist, but also just thankful to have access to one. So, because Sarah essentially convinces herself that she’s a clone of her grandmother, I have one last extremely serious question: if you had a clone, what’s the first thing you would tell it to do? I’m assuming we can control our clones.

AB: Oh, wow. If I had a clone I could control, I feel like they would just become my full-time assistant [laughs]. I’m picturing them going to the dry cleaner.

BS: You could stay at home alone with the cat and send the clone out on date night.

AB: Yes. And I get very antisocial, so I’d be like, “Go to the bar with my friends. Go pick up Dad and take him to the museum, and go hang out with some people for me.”