Obviously for Jackson, the work is incredibly personal. “People tend to forget about the families of those who are incarcerated,” she explained. “They very much fall into the narrative of ‘They did the crime, they’re doing the time.'” Jackson knows from her own experience how financially trying it can be for the inmate’s family. 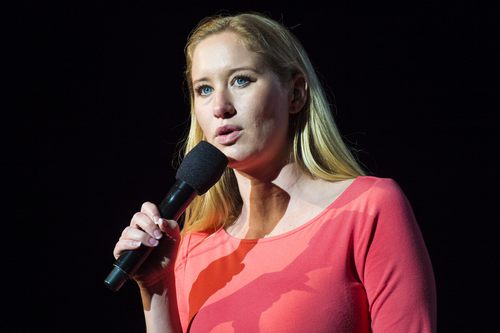 When you think of women who are changing the political landscape for the better, people like Elizabeth Warren and Alexandria Ocasio-Cortez might come to mind. But Jessica Jackson is proof you don’t need to hold a position in office to be a catalyst for policy change. Jackson’s name might not be familiar to you, but the human rights attorney is working to overhaul the US prison system, is a legal mentor to Kim Kardashian, helped pass the First Step Act, and cofounded #cut50, a bipartisan effort to decrease the incarceration rate. Her path to advocacy, and her talent for bringing Democrats and Republicans together, were borne out of her own personal tragedies.

“When I was 22, my husband was incarcerated,” Jackson, now 38, told POPSUGAR. Because she had just given birth to their daughter two months prior, she needed to do whatever she could to help her husband. “I didn’t have the luxury of sitting back and not getting more involved in correcting the ills of the justice system. I decided to become a public defender, went to college and law school, and ended up really becoming interested in criminal justice and working on everything from death row cases to federal policy.”

“Right off the bat, we felt the financial impact of having the breadwinner go to prison,” she said. “We scrambled and had to leave our home because I couldn’t afford it anymore. I instantly felt the burden of being a single mom, and having to provide for my daughter while going to school and working.”

“I didn’t have the luxury of sitting back and not getting more involved in correcting the ills of the justice system.”

After finishing law school, Jackson became the youngest-ever elected official in Marin County, CA, when she was named to the Mill Valley City Council in November 2013. In 2015, she partnered with news commentator, author, and nonpracticing attorney Van Jones to form the bipartisan non-profit #cut50, which seeks to cut crime and incarceration rates across the 50 states.

In order to make a lasting impact on the prison system, Jackson used #cut50 to bring a group of unlikely allies together, including members of Congress, business and faith leaders, and families directly impacted by the injustices of the prison system. Together, they crafted the First Step Act, a piece of legislation meant to “transform the federal prison system and reduce some of the harshest drug-related penalties on the books.”

For Jackson, the overarching point of the First Step Act is to give individuals the tools they need to be successful when they’re released from prison. “The purpose of the First Step Act is to make sure that people are job ready when they’re coming home from prison,” she explained. “We want to make sure these individuals are being treated with dignity while they’re incarcerated so that they don’t have trauma. We also want to ensure they have a meaningful opportunity to rehabilitate themselves while they’re inside, and that they’re coming home ready to get to work.”

As the first step in a long series of reforms, Jackson admitted that the law is one of the few pieces of legislation both Democratic and Republicans agree upon.

“We’ve had over 7,000 people come home [from prison], and I think one of my favorite things is watching video after video of these families being reunited.”

“One thing I love about the First Step Act is that with such a huge national spotlight and so many unlikely people coming together – everybody from Cory Booker to Donald Trump to Nancy Pelosi to Sheila Jackson Lee to Ted Cruz – you’ve never seen a coalition so strange,” she said. “It’s such a strange group of characters that it inspired lawmakers on the state level to reach across the aisle and say, ‘Look, we can get something done.'”

On Dec. 21, 2018, President Trump signed the First Step Act into law after it was overwhelmingly passed by the bipartisan majority in Congress. For Jackson, it was an exciting step in the right direction. “I was really emotional when it passed,” said Jackson. “We’ve had over 7,000 people come home [from prison], and I think one of my favorite things is watching video after video of these families being reunited.”

“In some ways, seeing families reunite is almost therapeutic for me,” she explained. “My husband and I broke up while he was incarcerated. We got a divorce right when he came home, so unfortunately, we didn’t have one of those magical moments of reuniting . . . I know so many families that have been ripped apart by the system. It’s amazing to watch these families come together when [a family member] is coming home, especially the folks who thought they were going to die in prison until the First Step Act passed.”

Jessica admitted there’s still work to be done when it comes to prison reform, but she’s received significant support from Kim Kardashian. As Kardashian’s mentor, Jessica has been impressed by Kim’s “persistence and tenacity,” especially when it came to getting a pardon for Alice Marie Johnson aka “Miss Alice,” a 65-year-old grandmother who was given a life sentence in 1996 for a nonviolent drug charge. After spending 21 years in prison, Miss Alice was granted clemency by Donald Trump on June 6, 2018.

“Kim never gave up on Miss Alice, even though it was difficult,” said Jackson. “I think people only saw her walk into the White House, and basically walk out with an agreement for Miss Alice to be free. But there were months and months and months of work done before that. She does so much that people don’t even know about. She reads all the letters she gets, she figures out how she can help people. I’m just so impressed by her deep commitment to the cause.”

On March 4, Jackson and Kardashian attended a meeting at the White House, along with a group of formerly incarcerated women, to discuss how to bring more change to the American justice system.

“We are proud to continue to work with leaders that are committed to advocating for changing our system to ensure justice for all,” Jessica told POPSUGAR. “Women inside prisons are often separated from their families, placed in extreme conditions of confinement, and stripped of their dignity. As we work towards reform, we are eager to continue to fight to reunite families and uplift the leadership of individuals impacted by the criminal justice system.”

Now, as the current chief advocacy officer at Reform Alliance, Jackson is thinking even bigger. She’s currently working on several clemency cases and focusing on bills geared toward the 4.75 million Americans who are not incarcerated, but rather are living under community supervision.

“What we’ve come to find out is because of really silly things like technical violations, many of these people are getting sent back to jail, even if they have a job, a housing situation, and custody of their kids,” she explained. “They cycle back into the system because they miss a meeting with a probation officer or they can’t make their restitution payment.”

As for her advice to other young women who want to see policy change? Fight for what you believe in. “It’s all about letting your anger turn to action as opposed to letting it build up,” she advised. “I let what happened to my family guide me in discovering my passion and using that passion to make change. It should always be about really looking at people, and putting people over politics and being willing to take some heat and work with whomever you have to get things done.”

What Became of Pearl Fernandez After the Court Case