“When I became Lady Gaga when I was younger, it was because I discovered makeup. It means so much to me on a deep visceral level – the power of makeup to change how you feel when you’re at your lowest,” Gaga explained. 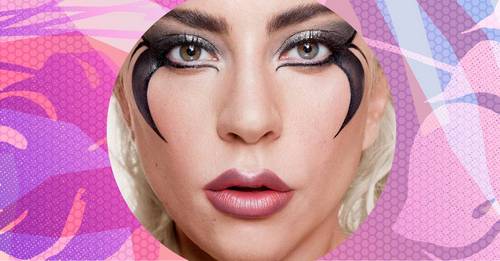 “All of the insecurities that I’ve dealt with my whole life from being bullied when I was younger, they come right back up to bite me. Then I put makeup on, and before I know it I feel this superhero within. It gives me those wings to fly,” this is how Lady Gaga described the act of putting on makeup in a new cover story for Allure.

It’s no secret that Gaga has long called upon her hair and makeup to help shape her identity as a stratospheric global megastar, from the ice blond curls that have become her trademark, to the Bowie lightning bolt she painted on her face in tribute to her idol at the 2016 Grammy’s, and the otherworldly gold-spiked lashes she wore to this year’s Met Gala, cosmetics are her equivalent of a superhero cape, used to experiment with and express how she’s feeling at the moment.

Having had a meteoric career which saw her top the charts, perform at the Super Bowl, headline Coachella and take the lead in A Star Is Born, she felt herself breaking down. “I would do a show, then I would get on an airplane, go to another country or state, get off, drive 40 minutes to the hotel, go to sleep, wake up, do another show. I was dizzy,” she admits.

One of the things that helped ground her in the craziness of her career and bring her back to herself, was makeup. “Sarah [Tanno, Lady Gaga’s makeup artist] would pick me up off the floor, sit me in a chair, dry my tears, and say, ‘I’m going to put on your face now,’” she told Allure. “Sarah would do my makeup, Freddie [Aspiras] would do my hair, and they would hold me and say, ‘Look at yourself. There’s Lady Gaga. You can do this. Now go do it.’ And I would go out there, and the second that spotlight hits me, bam, I’m in the zone,” she said. “But I can’t do that without them. That is the power of glam for me. Not everybody has a Sarah, but I’m very lucky that I do. And I want this line to be for the person at home who needs that pick-me-up.”

One thing Lady Gaga is clear on, is that her makeup line (which launches exclusively on Amazon this month), is for everyone. “I would like all gender identities to know very clearly that they are included. I want that little boy at home that might like to be called a girl to say, ‘Mommy, I want to wear Dynasty […] and then she goes and she gets it for him. And he uses it. And then there’s a bond.” Gaga’s always been an advocate for the outsiders, having felt like one herself for much of her life. From her roots, performing at gay bars and clubs in New York, to her song Born This Way, which has become an unofficial LGBTQ+ anthem, (she once said she’d “take a bullet for the LGBT community”).

This makeup line is as much about liberation as it is transformation. “I want the same thing that I’ve had in my concerts to happen with this company. If I’m not changing people’s lives, what are we doing here?” It’s a message we’re more than happy to buy into. *Adds all the makeup to basket.*

The Mimi Luzon 24k Gold Face Mask that models like