This week, a batch of unknown singletons (aka the contestants) descended on the Love Island villa and got set to compete with each other for love.

Despite jetting into the island to look for love, Kendall, who was brutally dumped by her long-term ex-fiancé before flying in, was sadly the first victim of the ITV2 show’s weekly dumping.

GLAMOUR caught up with Kendall after leaving the villa. Here’s what she told us…

Kendall on leaving the villa

I am a little bit gutted to be the first one out. I won’t lie, it’s not nice being the first one out, but I do feel positive that I did everything I wanted to do, and I stood my ground, and I have no regrets about what I did.

I was definitely closest to Samira. She was such a good friend to me. If I ever got upset, which was quite a lot in the end, she was always there. I will miss Samira most. Luckily I got on with everybody in there, so I will miss them all.

If the girls had been leading the coupling up, who would you have chosen and why?

I would have chosen Adam, definitely. I think we had the most connection. We were both attracted to each other. If I saw him on the outside, of course I would say hello and be polite, he hasn’t done anything wrong other than going with his gut and choosing Rosie. He was definitely my type though, had I seen him in a bar on the outside world, he was someone I would have gone for.

Did Adam have any bad habits?

He snored. Very loudly. And kept everyone awake, not just me.

If you had to tip one of the couples to be engaged by this time next year who would it be?

I would pick Dani and Jack. They seem to have a great connection. They get each other, which is really nice. They did have a glitch early on, but they click.

If you had to say one person was playing the game more than anyone else, who would it be?

I really don’t think anyone’s playing a game yet. Everyone is being really true to their feelings.

What single Love Islander do you think has what it takes to win the show?

I think Dani and Jack will get to the final, definitely. I would hope Alex would find someone, and it would be so nice to see him get to the final. He’s so lovely, he needs to find someone that’s right for him. Laura and Wes were quite an unexpected coupling. At first I thought, ‘are they well suited?’ because she was into Adam. But over the past couple of days, they have seemed really close. They are really happy and really into each other.

If you could turn back the clock, what would you do differently?

There’s nothing I would do differently. There were times when the girls were saying ‘if Adam’s into Rosie, why don’t you try getting with Eyal’ but I was like ‘no, I’m not going to fake something to save myself.’ I was in there to find somebody that I was into, not in there just to stay until the end to play the game. I stuck to my guns.

Kendall and has coupled up with funny man, Niall, but her Harry Potter knowledge might not have satisfied him completely. We can’t wait to see what’s in store for the couple.

Kendall, who applied for the show at 5am in her mum’s kitchen after her ex brutally dumped her, told GLAMOUR UK that she felt pressured into having cosmetic surgery after being dubbed ‘old looking’ on a shoot recently. We can tell you first-hand that Kendall is absolutely stunning, and definitely doesn’t need cosmetic treatments. 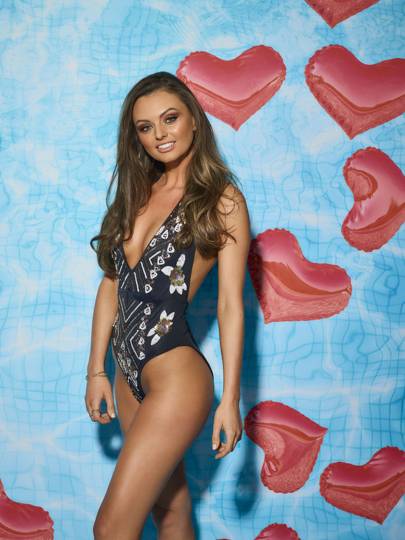 She told us: “I was on a shoot – I won’t say what for – but the photographer and the client who had booked me were sat at the laptop screen and kept saying over and over again: ‘she’s quite old, we will have to airbrush her around her eyes, we maybe needed someone with a fresher face’, so I did actually go out and get Botox.”

Other than a small tweakment, Kendall says she’s barely done any wellness prep for the show – and despite her trim figure, she claims that her diet ‘isn’t the best’.

“I just eat a little bit of anything I want. I have a real sweet tooth,” she said.

Despite her glamorous appearance in her glossy press photos for the show, Kendall says it’s the most makeup she’s ever worn and prefers to take a pared-back approach to her beauty regime, citing her ride-or-die beauty tip as ‘just lots and lots of moisturiser’. Noted.

“I have my own hair, my own boobs and my own teeth. I just use a gel from my dentist to keep them looking white and just brush twice a day.” While she doesn’t take her beauty regime seriously, she is taking an impressive ten pairs of shoes into the villa with her (well, she does work for Clarks, after all).

While she’s yet to meet the boys, she does have a connection to a former contestant.

“I know Zara Holland because I was Miss North West when she was Miss Hull so we did Miss England together. I watched her and thought she was brilliant but she had a tough time avid fans will remember Zara being ‘slut shamed’ and losing her Miss GB crown for getting intimate with Alex Bowen.

“I felt like I really knew her and when she got upset, I got upset. I felt the slut-shaming was a little bit harsh because you could tell Zara just wanted to be happy with someone. The girls should have stuck by her more.”

Does Kendall think Miss GB is anti-feminist? “It’s their decision on what they want but in this day and age, they say they want to move away from that stereotypical beauty pageant – getting girls to walk in a swimsuit – but they drag themselves into it.”

If you’re wondering whether Kendall might find herself in the same situation as Zara (yes, we know you’re all thinking it…) so would she have sex on the show? “I am open to anything. I think nowadays, there are so many people with so many opinions I don’t think it’s wrong or right to slate something to what they do or don’t want to do.

“When I told my mum I was going on the show, her response was: ‘go for it, the only regret I have from my youth is not getting more grass stains’.”

We wish Kendall the best of luck outside the villa!