As one-third of the most iconic girl groups of all time (and if you disagree, please exit your browser right now), Kelly Rowland knows a thing or two about being unstoppable.

Rowland, who says she’s “pro-woman and a feminist all day long,” was on hand at last week’s Schick event promoting its Intuition F.A.B bidirectional razor (yes, you can use it back and forth without having a bloody shaving mishap), and had already had a more productive day than I, but that didn’t stop her from dropping some serious pearls of wisdom.

The 37-year-old has one of the most soothing speaking voices I’ve had the pleasure of hearing, but relaxing as it is, the words that come from her mouth are poignant, careful, and impactful. And indeed it was the measured, thoughtful nature of her words that truly resonated with me. In fact, it was refreshing – especially when you consider that we live in a culture that allows (and at times encourages) people to anonymously spit out whatever misguided or mean-spirited thoughts they have with just a few taps on a screen, and send it out for public consumption. 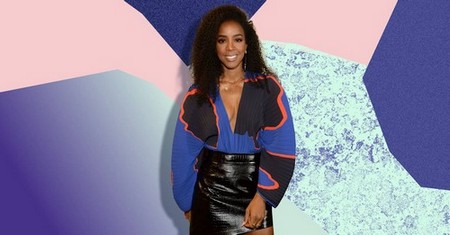 Trolling – on the web and in real life – is fast becoming the norm, and whether or not you’re in a highly visible position like Rowland is, you’re bound to come across unsolicited mean comments from folks.

“If you leave it up to the Internet, some people will have you feeling like you don’t even deserve existence. And that’s probably because of the hole that they’re in,” Rowland says. As a celebrity, she’s dealt with her fair share of maliciousness on the internet, but haters will be disappointed to find out that she doesn’t let all that nonsense effect how she feels about herself. “I think that it’s just important to feed yourself positivity. Feed yourself how beautiful you are. Feed yourself how you are special. Feed yourself that you are a light. Tell yourself that. I used to think that sounded corny, but I do it every day, and I’m 37. It took me ’til 37 to realise that and it feels good. It helps to keep your light bright because the world will try to dim you, people will try to dim you – that’s if you let them.”

If you leave it up to the Internet, some people will have you feeling like you don’t even deserve existence.

I can’t imagine anyone dimming Rowland’s light. Between that glowing skin and her equally radiant personality? Haters and trolls could never. And with summer coming up, Rowland’s glow is on extra bright – and, fortunately, she wasn’t afraid to share a few details with us on the (surprisingly simple) way she gets it. “I like to have a spot cover. I like Jessica Alba’s Honest Beauty,” she says. “They have a Magic Balm – I swear by it. It’s my go-to, I love it. I put it on my lids and my cheeks.”

Rowland also like to keep her legs smooth as the temperatures start to rise, so, naturally, she’s been reaching for her Intuition F.A.B., too. Though she did mention that she wishes she had it when she first started shaving her legs. “I told somebody earlier that I was so upset that this was not out the very first day I attempted to shave my legs. The worst thing that happened, is while I was shaving, I went back the other way, my best friend goes ‘nooooo.’ It was like slow motion. I hit the center of my shin where the bone is. I think I still have the scar.” And yes, I can confirm that she still does. She showed it to me. “So as much as I’m happy for Schick, I’m like ‘gosh darn it, guys, I really needed this the first day.'”

I’m waiting for black dermatologists to come out with a sunscreen.

Another must-have for Rowland is sun cream. “I wear it every single day,” she tells me. As a brown girl, sunscreen can be tricky, as many leave a white cast making you look more Ashy Larry than glowing goddess. With this in mind, Rowland turns to IS Clinical’s SPF. “It is my favourite product. I swear by it. It doesn’t break me out and I don’t have the white look afterward,” she says. “I can put my makeup on and when I take a picture it’s like, ‘Oh, she’s glowing.’ I’m waiting for black dermatologists to come out with one, though.”

Rowland’s obviously a busy woman, but I couldn’t end my conversation with the singer without asking her about Coachella. She took the stage alongside Beyoncé, the first black woman to headline the festival, and Michelle Williams for a segment of Destiny’s Child songs. The performance was an homage to HBCU marching bands, a celebration of African-American culture. While I was not there to take it in myself, as I streamed the performance from the comfort of my bed, I couldn’t help but feel welled up with pride.

While I do not consider myself an African-American woman (my family is from the Caribbean), the cultural commonalities between African-descended people of the diaspora are not lost on me. And I could feel them as I took in the performance. “Rhythm for all African cultures is the common thread,” Rowland says. It runs deep within black culture, no matter where in the world black people are from. And it is this rhythm, this connection, is something that Rowland says she saw early on in her son, Titan.

And that’s one of the many things that’s so rich about us: It’s our rhythm. Think about the rhythm we radiate to the world.

“What really amazed me is when he learned rhythm. That it was natural. And it was nothing that it was taught,” she muses. “He was listening to Rihanna’s ‘Work’ and there was like this slight movement in his shoulder. And that’s one of the many things that’s so rich about us. It’s our rhythm. And that kind of rhythm we have – think about the rhythm we radiate to the world. That’s why we’re so rich. But have to truly bring it in and understand what that richness is and how we spread it towards each other.”

Miranda Kerr and Evan Spiegel have welcomed a baby boy