Walsh, 50, went to a brain specialist in 2015 after she started to suffer weakness on the right side of her body, even veering into the wrong lane as she was driving. Grey’s Anatomy star Kate Walsh claims she had to push a neurologist to give her the MRI scan that led to her brain tumor diagnosis.

But despite being referred by her long-term general practitioner, Walsh told SELF, the male neurologist was unconvinced by her complaints, and suggested she was in fact suffering depression about being in her late 40s and struggling for work.

Eventually, Walsh claims, she persuaded him to perform the scan, which revealed ‘a very sizable tumor’ that required urgent surgery to remove.

Three years later, Walsh is sharing the story that chimes with many other Americans’ experience – and says she believes sexism may have played a role in her ordeal.

‘When I went to the neurologist, he’s like, “Why? What do you think you’re going to find?”‘ Walsh, who most recently starred in the hit Netflix show 13 Reasons Why, told SELF.

Walsh, 50, went to a brain specialist in 2015 after she started to suffer weakness on the right side of her body, veering into the wrong lane while driving. But getting a scan was difficult 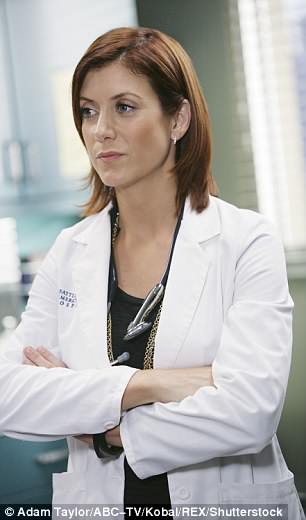 ‘And he was very condescending. He was like, ‘You’re an actress, you’re in your 40s, you’re not working,” before offering her antidepressants.

‘I was like, ‘Respectfully, I have a mental healthcare professional. I’m not saying I’m averse to that or that isn’t helpful but before I commit to a high dosage of antidepressants I’d just like to get an MRI.”

She added that she understands why doctors can be hesitant to offer patients such expensive procedures (an MRI costs, on average $2,600) – they had never met, and he may have encountered hysterical patients in the past.

However, she said, the situation threw her: ‘I do feel like it was probably a little bit of sexism. I had a female doctor in LA and I know that she was enraged when I told her about this.’

Walsh first disclosed her diagnosis and surgery last year in an interview with Cosmopolitan.

‘I went in for the MRI, and you know it’s serious when they don’t even wait, they’re like ‘hey, the radiologist wants to see you.’ And she starts to say ‘well, it looks like you have a very sizable brain tumor,’ and I just left my body,’ she said.

The symptoms came on slowly and she thought she was just tired.

‘I had been working insane hours, maybe 80 hours a week, and also working out really hard,’ she told Cosmopolitan.

‘My Pilates instructor said ‘hey, your right side is dipping,’ and it didn’t feel like I was off, but I looked down and could see it.’ 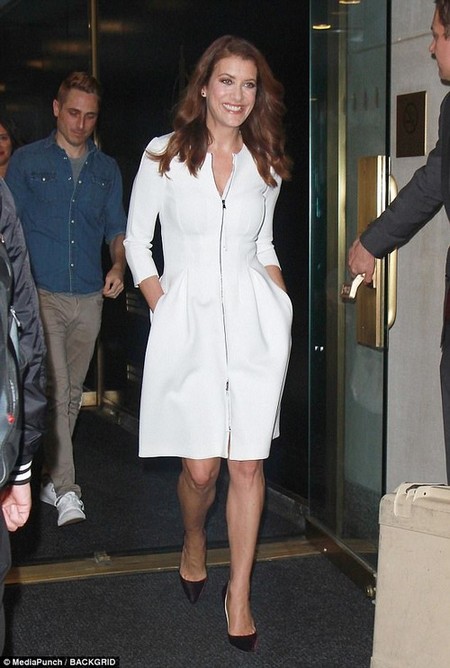 First signs: ‘I had been working insane hours, maybe 80 hours a week, and also working out really hard. My pilates instructor said ‘hey, your right side is dipping,’ she said

She added: ‘Then when I was driving, I started swerving into the right lane. The exhaustion got to the point where I could drink five cups of coffee, and still not feel awake or clear.

‘And then around April, I started having more cognitive difficulties. It felt like aphasia, but it wasn’t just not being able to find words; I would lose my train of thought, I wasn’t able to finish sentences, and that was when I got really alarmed.’

When the doctor told her what was wrong with her she was shocked.

‘The words “brain tumor” were never in my zeitgeist.

‘My assistant had driven me to my doctor’s appointment, and I had to go get her so that she could take notes, because I was gone. It was never anything I would have imagined.’

She then took nine months off.

She played a doctor on TV: With Tim Daly on Private Practice in 2007

‘When I came back, I hit it hard. I shot a film called Self that’s just going to Toronto now, I shot Girls Trip, I shot 13 Reasons Why, I did a play in New York last year, so it was great, once I was back I was really back.

‘Those cliché, existential things do happen when you have a brain tumor, like ‘how do I really want to spend my time?’ I want to be with my friends and family and work on projects that are hugely important to be, and fun, and that make a cultural contribution.

‘But my health comes first.’

She has changed her lifestyle.

‘In my business, it’s not unusual to be working 17 hour days, so it can be really challenging, but now I know I absolutely need seven or eight hours of sleep. As basic as that sounds, it was a huge part of my recovery.’

She joked that, surprisingly, playing a doctor did not prepare her for the ordeal.

‘You’d think that after playing Dr Addison for the better part of a decade, where I spent more time on a hospital set than at my house, that I would feel somehow more comfortable, but I was such a little scaredy-cat,’ Walsh said.

‘In the hospital, I felt like I might as well be six years old. My mother gave me rosary beads, my friend gave me a stuffed animal to go into surgery with. … I played a real bada** on TV, but when it comes to being a patient it’s such a vulnerable experience.’

She has learned how important it is to see a doctor.

‘I’m very proactive and willful and independent, and in the past, even though I played a doctor on TV for years, I was not one to go see doctors very often, other than for my annual OB-GYN appointment.

‘So for me, it was a really big wakeup call to do annual check-ups. … We should go get a checkup the same way we go to the gym, just preventatively, instead of waiting for something to go wrong.’

A role of a lifetime: In a scene with Dylan Minnette on 13 Reasons Why earlier this year

She felt the need to talk out to warn women.

‘This was a very private experience for me. I really didn’t want to talk about it, I wanted it to be mine, but I knew that someday I would want to share it,’ Walsh said.

‘One of the most interesting things for me about this diagnosis was that this tumor is twice as common in women as men.

‘It can be especially hard for women to take time out for their health – you’re mothers, you’re career women, you’re spinning all of these plates, and it’s hard sometimes to hand over the superwoman cape and ask for help.’

Dentists reveal the strangest questions ever asked by patients