2018 is already set to be a mammoth year for Kat Von D. She tied the knot with her partner Rafael Reyes, will be celebrating the ten year anniversary of Kat Von D Beauty, has a vegan shoe line on the way – and now a little bundle of joy, too. 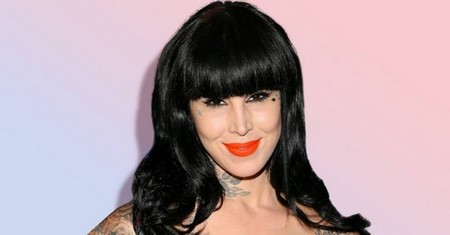 The 36-year-old tattoo artist and entrepreneur announced that she’s expecting, as well as the sex of the baby in a super sweet Instagram post.

This woman’s review is going viral after her eyeliner lasted through a car crash Rafael also shared the same post and revealed that they already have a name picked out – Leafer.

He wrote: “I thought I had it all. Life gifts me with the greatest of joys! We are pregnant and having a baby boy. I love you @thekatvond and Im (sic) ready to be a father to our son Leafar. Thank you my love our family comes first !!!”

Rafael (who also goes by the stage name Leafar Sayer) is one half of the electronic rock band, Prayers. The couple has known each other for years and collaborated on Prayers’ 2016 song, ‘Black Leather’. They made their relationship Instagram official in January 2018.

Kat had previously been married to tattoo artist Oliver Peck, but they separated in 2007 after 4 years of marriage. She was also previously engaged to DJ deadmau5 and before that, TV personality and CEO of an Austin Speed Shop, Jesse James.

We’re so happy for Kat and Rafael and we can’t wait to meet the little tike!

Katherine Ryan on learning from her mistakes, finding self-love Netflix’s The Duchess