Zei Uwadia’s lungs began to fail in October and for the past five months she’s been hooked up to what’s called ‘highest form of life support’ as doctors struggle to diagnose her, according to CNN.

A 16-year-old girl who was almost killed by a mystery illness has exceeded her doctors’ expectations by walking while tethered to a life support machine.

In December she started feeling stronger, sitting up, standing and even marching in place – so she made a bet with one of her doctors: if she could manage to stand up on her own for five minutes, they would figure out a way that she could walk.

Zei stood for seven – and the doctor kept her word.

The hospital made its first-ever protocol for allowing ECMO patients to walk and exercise – with Zei as its inspiration.

Since then she’s become a familiar face around the hospital as she makes her rounds through the hallways, gets manicures, visits the chapel and even lifts weights – all with an artificial lung trailing behind her.

Her mobility has not only strengthened her own lungs but also inspired new exercise protocols for ECMO patients across the country. 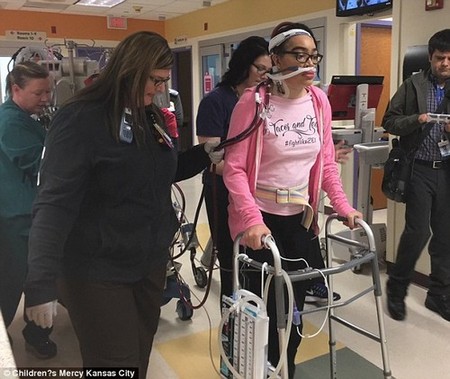 Zei Uwadia, 16, exceeded doctor’s expectations by learning to walk while on life support at a Kansas City hospital after a mystery illness caused her lungs to fail in October

Zei has been in the hospital for five months as doctors struggle to diagnose her. She is pictured right with her mom, Brie Kerschen

Zei is an aspiring dermatologist set to graduate high school early this spring.

She first started to feel weak and short of breath in October, and a few days before Halloween she texted her mom asking if someone could come pick her up from school because she was feeling lightheaded and dizzy, followed by a text that said: ‘Please hurry.’

Her condition worsened as her lungs began to fail. She was later admitted to a hospital in Wichita and given a number of tests, but they all came back negative.

In November she was transported to Children’s Mercy Hospital in Kansas City where she was put on an an extracorporeal membrane oxygenation (ECMO) machine, an extensive form of life support that takes over the responsibility of the lungs by oxygenating the blood and removing carbon dioxide before recirculating it in the body.

The average time a patient spends on ECMO is about 21 days, and being on the machine for more than 100 days is rare.

Zei has been on it for more than 130 days, which is a record for the hospital.

She’s been monitored around the clock because the machine requires the her blood to be thinned out so it can pass through the plastic tubing without clotting. As a result she’s had multiple side effects such as bloody noses and tears. 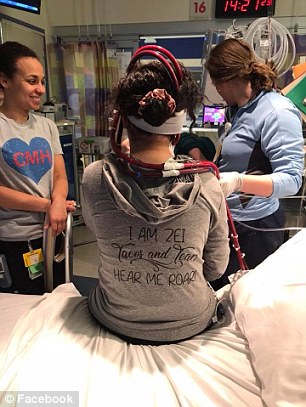 Zei has now been on an extracorporeal membrane oxygenation (ECMO) machine for more than 130 days. The average time patients spend on ECMO is 21 days

‘Her primary deficit was with oxygenation, and so her oxygen levels have been low and remain her biggest problem,’ Dr Jenna Miller, a pediatric intensivist at the hospital, told CNN.

‘What we know is that all of her lung tissue on both sides is affected. What we don’t know is what caused it,’ she said.

Dr Miller said the team has investigated a vast array of possible causes but have yet to come up with an answer.

It’s been reaching out to other centers across the country that may be able to help come up with a diagnosis.

By December Zei was feeling more stable, alert and mobile, but the doctors didn’t have a protocol for a patient taking steps while tethered to an ECMO machine because no one had tried it before.

One day toward the end of the month Zei asked one of her doctors, Debbie Newton: ‘What do I have to do to walk?’

Dr Newton said: ‘If you can stand unassisted for five minutes, I’ll figure it out.’

‘Not only did she stand for five minutes, she had to beat me, she stood unassisted for seven minutes,’ Dr Newton told CNN.

When Zei started to feel stronger in December, the doctors devised a plan that would allow her to walk safely while hooked up to the ECMO machine

The hospital quickly put together a safety checklist for ECMO patients to move and walk, which includes making sure the machine is attached securely and closely monitoring the patient’s movements.

Several other hospitals have reached out to Children’s Mercy for guidance in developing their own protocols for walking on ECMO.

‘I hope someday Zei realizes not only what she’s done for our program but what she’s going to do for other programs,’ Newton said.

‘I don’t think at 16, you can really wrap your mind around that, especially when right now her ultimate goal is to just go home, but I hope someday that she realizes the impact she’s had on us and hopefully others out there in the world.’

Zei’s most recent X-rays showed her lung function has improved, which the doctors credit to the exercise.

If the lungs don’t manage to regain full function on their own soon, she’ll be put on the transplant list for a new pair.

‘The biggest relief will be to walk back into our house and for her to be able to walk up the stairs to her bedroom and be able to just lay down in her bed and relax,’ her mother Brie Kerschen said.

The 16-year-old is an aspiring dermatologist with plans to graduate college early this spring. She’s pictured putting on makeup (left) and FaceTiming a friend (right)

A recent X-ray showed that Zei’s lung function has improved, so doctors are optimistic 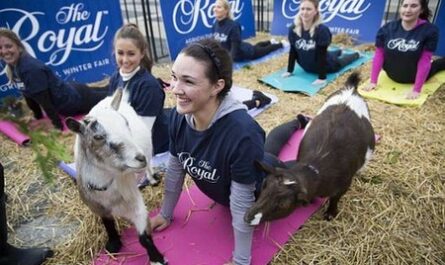