With photographer Tyler Mitchell behind the camera, Kamala posed in a black Donald Deal suit and her signature Converse sneakers for Vogue’s print cover. She honored her Alpha Kappa Alpha roots with a strand of pearls as she stood against a draping pink and green background, signifying the sorority’s colors.

In less than two weeks, Kamala Harris will make history as the first Black woman and first South Asian American woman sworn in as vice president of the United States. To mark such a momentous achievement, Vogue featured the politician as its February 2021 cover star, but the publication’s leaked cover quickly drew criticism.

According to internet commentators, the styling and lighting didn’t reflect the powerful position Kamala will soon hold.

However, critics described the cover as “awkward” and said the lighting “washed out” our future VP. They also questioned the magazine’s decision to feature Kamala in an outfit similar to those she wore on the campaign trail, instead of choosing a bolder look. 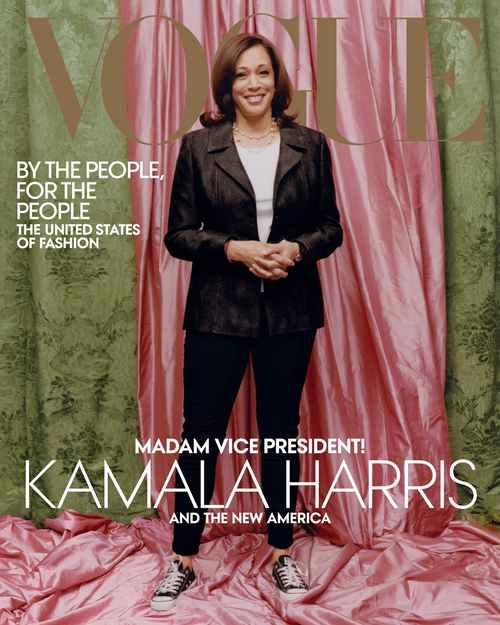 A source told POPSUGAR that Kamala and her team were responsible for her styling.

According to HuffPost reporter Yashar Ali, Kamala’s team were taken off guard by the photo chosen for Vogue‘s cover. They agreed to an entirely different shot. “In the cover that they expected, Vice President-elect Harris was wearing a powder blue suit,” Yashar tweeted, referencing information from an unnamed source. “That was the cover that the Vice President-elect’s team and the Vogue team, including Anna Wintour, mutually agreed upon. .. which is standard for fashion magazines.” CBS News echoed Yashar’s scoop, writing the cover “blindsided” Kamala’s aides. 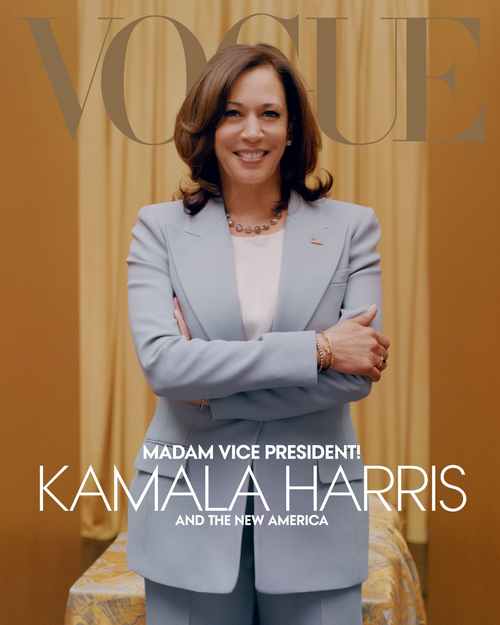 Later, Vogue debuted a second image of Harris wearing the blue suit Yashar mentioned. Apparently, this agreed-upon shot became the magazine’s digital cover without the vice president-elect’s knowledge. “A source tells me the now-pink and green cover wasn’t even selected by the Harris’ team as an OPTION to go inside the photo spread (not cover),” CNN producer Jasmine Wright tweeted. “So someone would have had to go outside of the approved photos they selected to choose the pink and green image.” Kamala’s team have yet to comment on the photo shoot or the criticism that followed.

“The team at Vogue loved the images Tyler Mitchell shot and felt the more informal image captured Vice President-elect Harris’s authentic, approachable nature – which we feel is one of the hallmarks of the Biden/Harris administration,” Vogue shared in a statement. “To respond to the seriousness of this moment in history, and the role she has to play leading our country forward, we’re celebrating both images of her as covers digitally.”

These latest critiques further emphasize frustrations surrounding Vogue’s treatment of Black women on magazine covers and on staff. Photographs of Simone Biles and Cardi B are cited as recent examples where the publication fell short and didn’t serve women of color as it does their white counterparts.

Last year, Editor in Chief Anna Wintour acknowledged the failing in a company memo. “I want to say plainly that I know Vogue has not found enough ways to elevate and give space to black editors, writers, photographers, designers and other creators,” she wrote. “We have made mistakes too, publishing images or stories that have been hurtful or intolerant. I take full responsibility for those mistakes.” It sounds like there’s still work to be done.

This Personality Test Changed the Way I View My Relationships

I Visit a Real-Life Hallmark Christmas Movie Town Every Year