Turns out, Kanye West wasn’t too thrilled with Kim’s Met Gala look back in May. The dress she wore, which was designed by Thierry Mugler, was dripping in crystals and defied all human proportions.

To fit in the skin-tight number, Kim wore a custom-made corset that cinched her waist in so tightly that she had to take breathing lessons before the event.

From her standout street style to her glamorous red carpet looks, Kim Kardashian is on the path to becoming a fashion icon. And although her bold clothing choices are often criticized by the public, she was clearly caught off guard when she received scrutiny from an unlikely source: her husband.

On the latest episode of Keeping Up With the Kardashians, Kim and her sisters are shown preparing for the Met Gala. At the final fitting, she had expressed some worry about pulling off the look, and that’s when Kanye chimed in with his own concerns. He began by objecting the corset and explained to his wife that he didn’t want her to look “too sexy.”

“You are my wife and it affects me when pictures look too sexy,” he said. “The corset is, like, a form of underwear. It’s hot, but it’s hot for who, though?”

“The corset, underwear, all of that vibe, I just feel like I went through this transition from being a rapper, looking at all these girls, and then looking at my wife like, ‘Oh, my girl needs to be just like these other girls, showing her body off, showing this, showing that.’”

Kim, who had been planning her Met Gala outfit for 11 months, shut down his last-minute disapproval and told him that he was only making her anxiety worse. “I don’t need any more negative energy from you,” she snapped.

She continued, reminding Kanye how he has encouraged her to embrace her sexuality over the years and essentially influenced her style. “You built me up to be this sexy person and have confidence and all this stuff, and just because you’re on your journey and you’re on a transformation, doesn’t mean that I’m in the same spot with you,” she said, referencing his spiritual transformation.

Kim makes a strong point. Kanye has spoken out about Kim’s figure and fashion choices plenty of times. He once told Harper’s Bazaar, “I think it’s important for Kim to have her figure. To not show it would be like Adele not singing.”

Of course, Kim’s fans immediately took to social media to call out Kanye’s hypocrisy. “Kanye has no right to tell her he doesn’t like seeing his wife take sexy pictures when he legit has music videos showcasing her naked body for all the world to see,” one use wrote.

“So now Kanye suddenly thinks that because Kim is his wife she should be more conservative,” another added. “Good for Kim on checking him.”

Ultimately, Kim stood her ground and looked stunning in her Met Gala dress – with Kanye on her arm.

Is ethical influencing the answer to both our environmental and social media concerns? 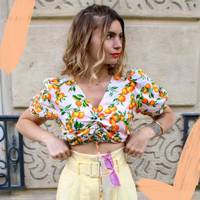 Torso ruching is one of this season’s hottest trends