Hailey’s dad tweeted and then deleted the following message: “Sweet smile on my face! me&wife (Kennya) Always pray 4 Gods will !! He is moving in the hearts of JB&HB Let’s all pray for His will to be done Love you 2 so much !!! #Godstiming #bestisyettocome Congrats @JeremyBieber @pattiemallette #PraiseJesus.”

Bieber and Baldwin previously dated and endured a messy breakup in 2016. The pair reignited their romance mere weeks before the whirlwind engagement.

Although the news of their engagement comes as a surprise to fans, marriage may have been on Bieber’s mind all along. In fact, in an interview for the March 2016 issue of GQ magazine he candidly discussed their future, despite the fact that they called it quits.

“What if Hailey ends up being the girl I’m gonna marry, right? If I rush into anything, if I damage her, then it’s always gonna be damaged. It’s really hard to fix wounds like that. It’s so hard … I just don’t want to hurt her,” he told the mag. 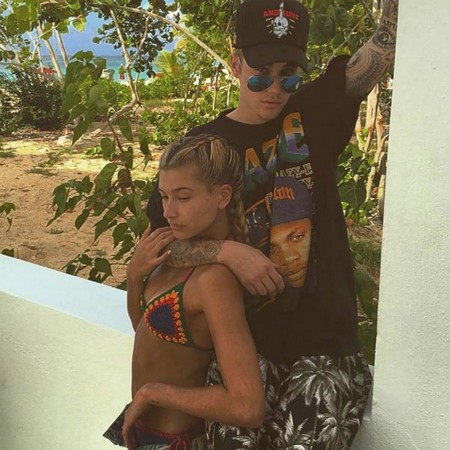 Prior to rekindling his love with the model, Bieber was back together with ex-girlfriend Selena Gomez. The singers dated from 2010-2012 and reunited in October 2017. The last time they were seen together was March 2018.

Baldwin was most recently linked to singer Sean Mendes. The duo attended the 2018 Met Gala together in May.

For more on celeb engagements, check out the top sparklers from 2017.