Scientists also discovered that inhaling two puffs of weed can alleviate anxiety, while 10 can help to combat stress. Taking just one drag of a cannabis joint can ease symptoms of depression, a study suggests.

However, the Washington State University researchers warned long-term use of cannabis could worsen symptoms of depression.

The team of scientists used a Canadian app called Strainprint, designed to track medical cannabis use and severity of symptoms.

How was the study carried out?

Data was assessed from around 12,000 volunteers, who were asked to record their signs of stress, anxiety and depression.

They were also asked about their method of using cannabis and how much they consumed, such as puffs when smoking it. 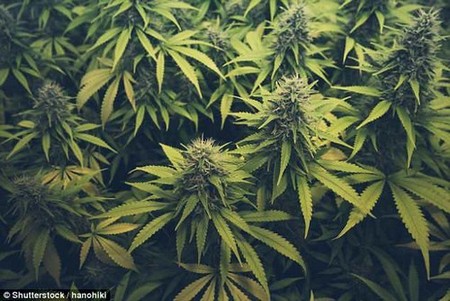 Researchers, led by Dr Carrie Cuttler, found symptoms of depression were halved as a result of the medical cannabis use.

Symptoms of anxiety and stress were reduced by 58 per cent, according to the study in the Journal of Affective Disorders.

THE DIFFERENCES BETWEEN THC AND CBD

What else did the study show?

A further analysis delved into the effects of different strains of cannabis and their cannabidiol (CBD) and tetrahydrocannabinol (THC).

It showed just one puff of a high-CBD, low-THC strain of medical cannabis was enough to slash signs of depression.

The same analysis showed 10 puffs of a high-CBD, high-THC strain proved the most beneficial for tackling stress.

Two puffs of any form of cannabis, regardless of its content, was enough to alleviate symptoms of anxiety.

Dr Cuttler said: ‘A lot of consumers seem to be under the false assumption that more THC is always better.

‘Our study shows that CBD is also a very important ingredient in cannabis and may augment some of the positive effects of THC.’

The compound is also showing signs of promise as a treatment for psychosis – despite the drug being considered a cause.

But concerns are growing over THC, which causes the ‘high’, which studies have suggested can lead to the mental health condition.

Campaigners warn that strains of super-strength skunk, abundant in THC, have flooded the illegal market in recent years.

Researchers believe CBD, which doesn’t cause a high, has the opposite effect, and has been touted as a cure for various conditions.

Dr Cuttler and colleagues argued ‘the repeated use of cannabis does not appear’ to curb stress, anxiety and depression.

Medical marijuana is already legal in 30 US states, Canada, Spain, South Africa, Uruguay and Argentina – but not in the UK.

WHICH POLICE FORCES TURN A BLIND EYE TO CANNABIS SMOKING?

Crime Survey figures show a million of these are aged between 16 to 24.

The substance is currently a Class B drug in the UK, and anyone found in possession can face up to five years in prison.

Selling the drug can get someone 14 years in prison and an unlimited fine. The same punishment exists for giving it to friends for free.

It is illegal to be under the influence of cannabis while driving, and can result in a prison sentence and disqualification.

On the streets, the average price of an ounce of cannabis tends to be in the region of £200. This is often enough for 40 joints, depending on how strongly people roll them. 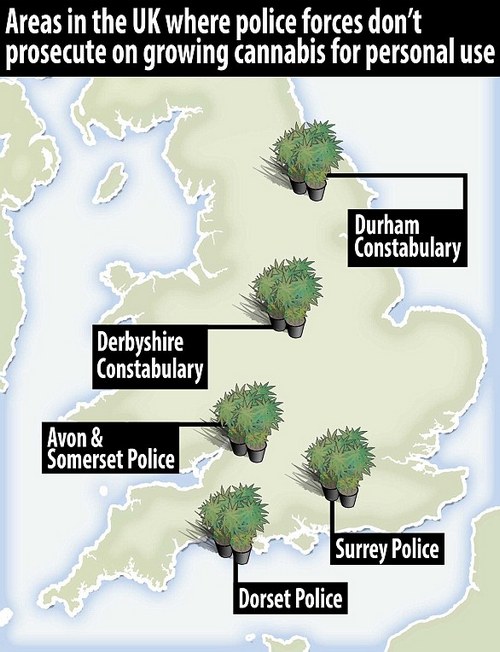 Reports suggest that around 270 tons of cannabis is consumed every year in Britain – which would equate to around £8.6 million at the aforementioned pricing. Some 80 per cent of this is grown here and not imported.

But five police forces in the UK have relaxed their laws on smoking cannabis and growing it for personal use.

A spokesman for Avon Somerset Police said in 2016: ‘We do not proactively seek out people who use cannabis but we do take a rigorous approach to dealing with anyone found in possession of it and they will always be dealt in one of a number of ways.

‘They will either be offered intervention, such as educational programmes, given a caution, asked to voluntarily attend a police station for interview or they may be arrested.

‘We regularly receive information from the public about suspected cannabis cultivation sites. As the public would expect we research that intelligence and act on what we’re told.’