Legend, who recently backed a start-up led by former inmates, began with his own story. “I have dealt with my mother being incarcerated in local jails in my home town, I have also dealt with friends in my neighborhood going to prison for years. I have dealt with what it feels like for them to come out of prison, not know if they can get a job or reenter society,” he told the MAKERS audience.

“It ravages so many communities. It is something we all have to deal with as a nation, because if you want to build a more loving society and community…we can’t continue to be the leading incarcerator of the world.” 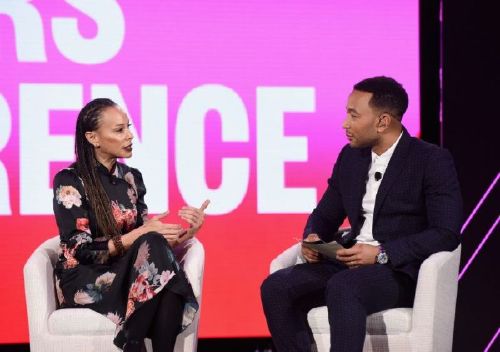 After revealing his personal connection, Legend zeroed in on women behind bars – the fastest growing prison population in the nation. Most engaged in the discussion was Saar, a human rights lawyer before joining Google, who has spent years interviewing women behind bars. One of the most barbaric things Saar witnessed was female inmates behind bars shackled during labor. But worse than this practice – which was officially outlawed (state-wide) just weeks ago – is the separation that happens to mothers afterwards.

“Many of the women who told me their stories are being shackled, they shared with me that they would have had every part of their body shackled if they could have kept their baby afterwards,” Saar told Legend, adding that the majority of women are in prison as a result of sexual abuse or addiction. “There’s very few programs where mothers are allowed to stay with their babies… the research is that babies do better when they are with their mothers.”

Of the few incarcerated mother programs in the nation, none allow inmates to live with their children longer than 24 months. Which means, said Saar, the situation ultimately ends in heartbreak either way. “The unfortunate thing is that when the program ends,  the babies turn two years old, they are taken away from their mothers,” said Saar. “That is traumatizing.”

Legend, following this statement, looked out at the audience soberly. “Can you imagine? This is America, folks. This is our country,” he said. “Our leaders do this in our name, with our tax dollars. Just think about that. This is America.” The conversation continued with Anderson and Rooks discussing their goal of reinvesting the money used for incarceration on other ways to increase safety.

By the end, Legend issued a call to action. “We have our marching orders as an audience. I think it is clear from all of these examples that political action is needed to end mass incarceration in America – that means changing the laws,” said Legend. “Be part of the solution, and not part of the problem.”