Was I hoping to gain insight into Joe Alwyn’s relationship with Taylor Swift by watching this movie? No, of course not; he’s playing a character. However, there is something thrilling about seeing the dude who inspired “Delicate” and “Gorgeous” just…exist for two hours. I finished this movie with no regrets.

I tuned into Netflix’s new romance movie The Last Letter From Your Lover for several reasons, and I won’t lie: One of them was to watch Joe Alwyn walk and talk. The notoriously private actor is dating a little-known singer named Taylor Swift, and because of this, he doesn’t do much press. Ergo, he’s a mystery-much like Meghan Markle was when she started dating Prince Harry.

Naturally, to feed my Meg-inquisitive mind, I binge-watched all seven seasons of Suits, and I’m employing a similar strategy with Alwyn.

It turns out The Last Letter From Your Lover is a deeply satisfying romance movie. It stars Shailene Woodley as Jennifer Stirling, a 1960s socialite with a seemingly perfect life-but she’s trapped in a cold, loveless marriage with businessman Lawrence (Alwyn). Enter Anthony O’Hare (Callum Turner), a finance journalist who interviews Lawrence for a story and becomes transfixed with Jennifer. The two begin a passionate affair, which is documented by letters they send back and forth.

Letters that are found in present-day times by a London writer named Ellie Haworth (Felicity Jones). With the help of her newspaper’s archivist, Rory (Nabhaan Rizwan), Ellie pieces the letters together-and what transpires will make even the most romance-immune feel something. 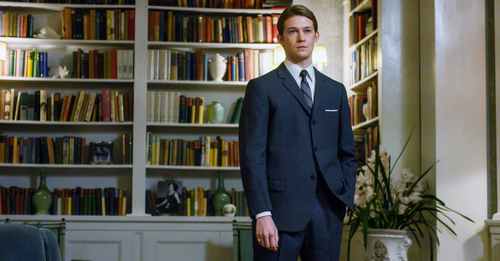 I don’t want to give away too much, but I’ll say this: You will cry. You will swoon. You will also be very angry at Joe Alwyn’s Lawrence. Mind you, this is the character getting cheated on, and yet you’re still rooting against him. You quite literally want Jennifer to keep lying and having her affair! That’s because Lawrence is, well, the worst. He may be one of the worst husbands in romance movie history.

Here’s a nonexhaustive and spoiler-filled list of the fuckery he exhibits throughout this movie:

But don’t fear: True love prevails in the end, as you expect in movies like these. Again, you’ll have to watch to see exactly how, but I promise you won’t be disappointed. Fans of a good costume drama will eat up every frame of The Last Letter From Your Lover. The outfits, especially the 1960s ones, are rich and vibrant. The dialogue is elevated and almost Shakespearean in its embrace of romance. And the performances, including Alwyn’s, are top-notch. Hey, he made me hate him in this movie-that’s literally his job.

The only thing missing from the puzzle? An original song from Taylor Swift. This is a movie about great, big swooping love, and who better to pen a track about that than Tay? She’s the expert on it! The professor! Thankfully, she has a host of songs that pair perfectly with this film. In fact, right after I finished The Last Letter From Your Lover, I listened to Folklore start to finish and sobbed. The emotions I felt during both experiences were similar. I highly recommend!