Famously known as the King Henry VIII’s second wife who was cruelly beheaded, Jodie described her character as “formidable and fierce” as she spoke about her decision to take on the role, which is to set to be a convention-defying three-part psychological thriller aiming to give a feminist insight into Boleyn’s life.

We’re about to see a lot more of Brit actress Jodie Turner-Smith. The Queen Slim star is taking on the role of iconic Tudor queen Anne Boleyn in a brand new Channel 5 series – and we’re just a little bit psyched.

The mini TV series, which has not yet been named, is written by Eve Hedderwick Turner and being produced by Fable Pictures (who created Stan Ollie), set to air on Channel 5 in the coming months.

Speaking about taking on the role, Jodie said: “I am so excited to join these exciting filmmakers in bringing the story of one of history’s most controversial queens to the screen. Delving deeper into Anne Boleyn’s immense strengths while examining her fatal weaknesses and vulnerabilities, Eve Hedderwick Turner’s scripts immediately captured my imagination.”

The actress continued, “In the hands of Lynsey Miller, the legend of this formidable queen and fierce mother will be seen as a deeply human story that is still so relevant for today. I look forward to bringing my heart and spirit into this daring retelling of the fall of this iconic woman.” 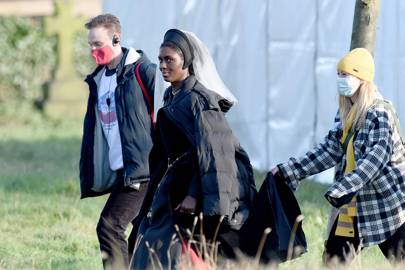 Images of the cast filming on location today have just been released, revealing Turner-Smith in period costume. Other cast members include Normal People‘s Aoife Hinds and Hamlet star Paapa Essiedu. White House Farm‘s Amanda Burton and Des actor Barry Ward are also among the people taking part in the series.

In a statement, Channel 5 said: “The drama will explore the final months of Anne Boleyn’s life from the eponymous queen’s perspective.

“The psychological drama follows her as she struggles to survive, to secure a future for her daughter, and to challenge the powerful patriarchy closing in around her.”

It is the second time a BAME actress has played the role of Anne Boleyn on screen, after Merle Oberon, an Anglo-Indian actress who played the royal in Alexander Korda’s 1933 film The Private Life of Henry VIII.

Dying to know what happens in the 20th series of Keeping Up With The Kardashians?