Jessica Jones (Krysten Ritter) is back after her debut season (and a team effort in “The Defenders”). But this time around, our favorite Hells Kitchen-dwelling, borderline-functioning-alcoholic and Marvel superhero reluctantly delves into her mysterious past — which, in a way, is a biggest bad of them all.

Along the way, her BFF/adopted sister Trish (Rachael Taylor) and neighbor/assistant Malcolm (Eka Darville) offer an assist, welcome or not, as Jessica also fends off a competing P.I. Pryce Cheng (Terry Chen, who favors very tight shirts, à la Luke Cage), and assorted adversaries, including her own personal demons.

But at least our non-super-suited hero is armed with some subtle, but meaningful tweaks to her signature uniform, courtesy of costume designer Elisabeth Vastola, taking over from Netflix MCU costume overlord Stephanie Maslansky.

To start, Jessica is trading in her mid-waist, slightly baggier Citizens of Humanity jeans for “little more rugged, a little more ripped up and a little more contemporary” styles that reflect real life denim trends. Coincidentally, the current interest in higher-waisted, heavier-weight cotton and ultra-distressed jeans also express what Jessica needs during her emotional journey. 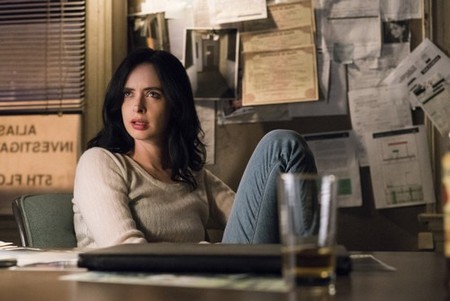 “I feel like she woke up one morning and was like, Im tired of these jeans. I want a new pair thats a little tougher and a little more rigid. I need that protection,” explains Vastola, who introduced Jessica to R13 denim, as well as new sweaters, tees and tank tops to incorporate into her signature uniform. “Just to breathe a new perspective into her already really strong look.”

But Jessica still wears the same black, stripped-down and distressed Acne leather jacket — her metaphorical superhero suit or cape — from season one and “The Defenders” and wont even take it off in the sweltering, soupy New York summer heat. Vastola notes that real New Yorkers (as well as Gigi Hadid) willingly “make sacrifices” in the name of fashion to sweat it out in climate inappropriate layers and, as many women will attest to, fashion is often our armor. So it makes double sense for Jessica to keep her moto on, even if humidity levels are at 99 percent — and the actress who plays her agreed. 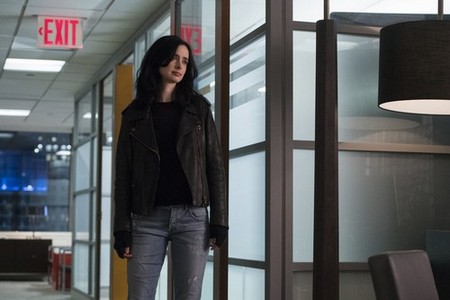 Jessica, not taking off her jacket.

“Krysten said, no, I think she keeps it. I think she sticks with it when shes hot and shes uncomfortable, but shes more comfortable than not with it on,” says Vastola, about her brainstorm about the seasonal situation with Ritter.

So its up to former child star turned radio show host (and aspiring investigative reporter) Trish to evolve with the “bigger transformation” in her wardrobe. Vastola, who also outfitted Jenny Slate in 90s New York-centric fashion in “Landline,” enjoyed the chance to explore the different facets and routines of Trishs daily life, similar to how a real professional NYC woman would dress. “It was really important to me that she felt like a friend of mine or a girl that I would see around the city,” she says. So she introduced new designers into Trishs “uptown”-leaning wardrobe, like Acne, Stella McCartney (look for a yellow tank) and Alexander McQueen, plus more experimental shapes and colors. 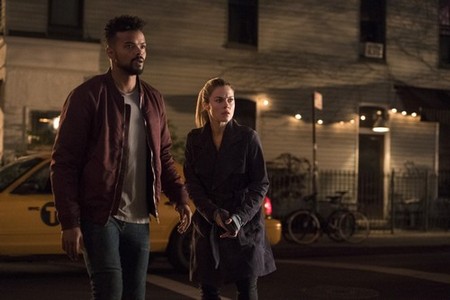 As a chic New Yorker dealing with unpredictable weather, Trish maintains her stellar coat and jacket collection and even ventures into a darker, moodier looks. For a sting operation with a reluctant Malcolm, she dons a brown velvet Rick Owens moto that looks like an elevated version of Jessicas, along with skinny jeans and Alexander Wang Gabi booties, as opposed to beat up motorcycle boots. “That was on purpose,” Vastola explains. “They have a really beautiful sisterhood that goes through ups and downs. I think that when Trish goes out to be that tough version of herself, shes going to draw from Jessica.”

No spoilers here because the Internet already knows: The mind-controlling, super psycho and absurdly natty Kilgrave (David Tennant), whose neck Jessica snapped in season one, re-appears. Judging from the stills, hes still nefarious and obsessed, but his signature purple-hued Paul Smith suiting has evolved. “We had one look and one moment with him, so I wanted to — as tastefully as possible — get his color palette, his mood and feel across,” says Vastola. So she looked to current season Ted Baker for the aubergine and green checked suit and accessorized with a tones-of Dolce Gabbana tie. 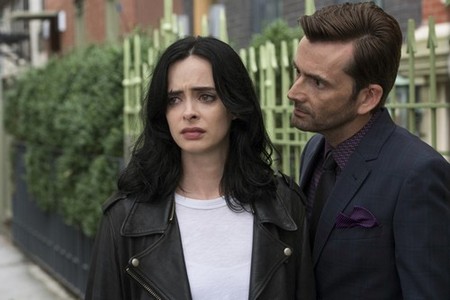 Overall, Jessica Jones leads a female-centric superhero story, supported by Trish, whos pushing herself professionally; Jessicas ruthless sometimes-boss Jeri Hogarth (Carrie Moss), who receives some life-changing news; and a mysterious newcomer played by Janet McTeer. Same goes behind the scenes, as showrunner Melissa Rosenberg stacked the entire series with a slew of female writers and all female directors, which created an environment for Vastola to express empowered characters through costume. 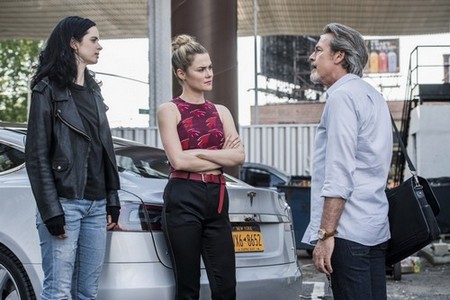 Or, in Jessicas case, whatever items of clothing she finds strewn on the floor next to her when she wakes up — possibly, probably hungover — because shes literally tossed herself onto the floor in a nighttime terror fit. The costume designer especially made an effort to show Trish dressing for Trish when tackling her various work, life and investigation scenarios, even if shes juggling a new dishy love interest, who hopefully is free of chemically-enhanced rage issues, unlike her last boyfriend Simpson.

“A lot of times in television or film, when youre dressing actresses, its because theyre going on a date or they like a guy, or theres some kind of ulterior motive,” says Vastola. “In this show, our ladies are really dressing for themselves — and in four very different perspectives — and theres something thats really refreshing about that. I have to say, it has to do with having a lot of women at the helm and being tired of the pressure to dress for someone else.”

So Jessica Joness non-supersuit, superhero suit just may be the most empowering female superhero costume of them all. 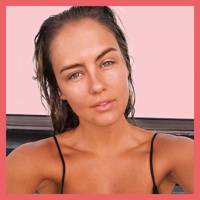 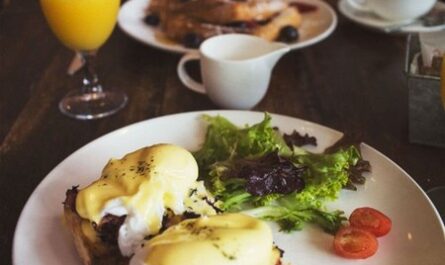 6 Reasons Why We Should Stop Demonizing Brunch 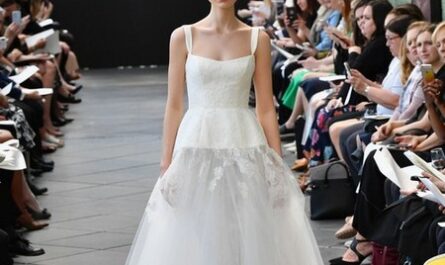