Jameela Jamil and Beanie Feldstein will be among the cast gracing our screens in the television adaptation of Feminists Don’t Wear Pink (and other lies), a collection of 52 empowering essays by women compiled by Scarlett Curtis.

Titled Girls Can’t Shoot (And Other Lies), the series will star a killer line-up alongside Beanie Feldstein (How To Build A Girl, Booksmart) and actor-activist Jameela Jamil (The Good Place). Also on board are American actress Kat Dennings (who starred in 2 Broke Girls), comedian Lolly Adefope (Shrill) and singer-actor Michaela Jaé Rodriguez (a.k.a. MJ Rodriguez).

It will be produced by Mark Gordon Pictures, while filming is expected to begin shortly. Feldstein’s girlfriend, Bonnie-Chance Roberts, is also on board as an executive producer. 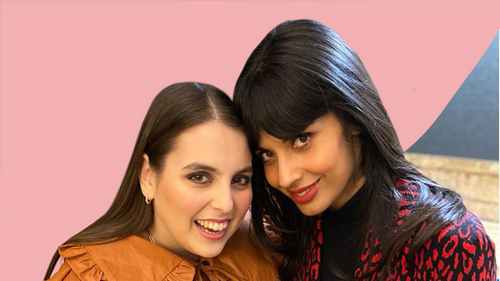 Based on Curtis’ bestselling essay collection – which features work from the likes of Emma Watson, Keira Knightley, Dolly Alderton and Karen Gillan, including Feldstein and Jamil – each episode of the series will feature a new lead and storyline based around one of the essays in the book.

We’re imagining it will be a format similar to Amazon Prime’s Modern Love – the adaptation of the essayistic New York Times column, which captured our hearts when it first came to television in September 2019 (returning for a second season earlier this year).

Who is Scarlett Curtis?

Scarlett Curtis is a 26-year-old writer, activist and former columnist for The Sunday Times Style supplement. She’s the daughter of power duo Richard Curtis (the director/screenwriter/producer behind Notting Hill, About Time and Four Weddings & A Funeral) and broadcaster Emma Freud.

She curated Feminists Don’t Wear Pink (& Other Lies) in 2018. This was followed by It’s Not OK to Feel Blue & Other Lies, a collection of essays by 74 individuals writing around the subject of mental health, in 2019.

In a statement to mark the series’ announcement, Curtis said: “It has been my lifelong dream to show that women’s stories can be both entertaining and empowering and I could not have found a more incredible group of women to bring their extraordinary visions to life.”

What themes will the show cover?

This sounds like the ultimate programme to binge-watch with our best friends, and we’re sure it will make for some lengthy discussions on our WhatsApp threads too.

It’s likely most of the key themes will be inspired by Curtis’ original essay collection, bringing important feminist discussions to life on screen. So, we’ll be rereading the essays in preparation, including Keira Knightley’s critique on the pressures on women to look perfect after giving birth.

When will Girls Can’t Shoot (& Other Lies) be out?

Like the rest of us, you’re probably waiting with bated breath to watch the show. But don’t get too excited just yet – as it’s likely we’ll have to wait until later in 2022, or even 2023 until the series hits our screens (impatient, us?).

In the meantime, there’s plenty of great TV to catch up on – including season 3 of You, and a whole host of gripping shows to watch on Amazon Prime.

In the months ahead, we’ll be hunkering down to watch the Sex And The City reboot, …And Just Like That (released in December of this year in the US, with a UK release date to follow shortly – we hope!),

SZA Just Dropped 3 New Tracks, and It’s All Because of Astrology