On Aug. 25, Blake’s loved ones gathered to share their emotional statements of heartbreak and loss with the public. His sister, Letetra Widman, however, remained dry-eyed as she delivered her powerful remarks.

“I’m not sad. I’m not sorry. I’m angry and I’m tired. I have not cried one time. I stopped crying years ago. I’m numb. I have been watching police murder people who look like me for years,” she said. “I don’t want your pity, I want change.”

Jacob Blake’s family members made powerful pleas for justice during a press conference in Kenosha, WI, on Tuesday afternoon. Their statements come two days after police officers shot the 29-year-old Black man multiple times outside his vehicle, with his three children present. Blake’s father said the bullets severed his son’s spinal cord and shattered several vertebrae, leaving him paralyzed from the waist down.

Widman wanted to ensure that Blake is described as a father, a cousin, an uncle – a human life. “Just like every single one of y’all,” she said. “His life matters.” Widman said people have been reaching out and apologizing for what’s happened to their family. 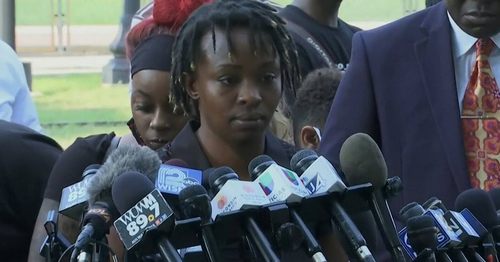 Blake was in surgery as his family addressed the public. His mother asked for prayers on his behalf and his father wept as he read Al-Fatiha, the first chapter of the Quran. The family’s attorney, Benjamin Crump, said “it is going to take a miracle for Jacob Blake Jr. to ever walk again,” as he’s “struggling to sustain his life and to hopefully become some resemblance of the man he once was.” You can take action to help Blake by donating to ease the burden of his medical bills or by calling local officials to demand a full investigation and police accountability.

Bambi Does Beauty, reveals the 30 beauty lessons she’s learnt as she turns 30