29-year-old Jacob Blake was shot in the back by a police officer seven times on 23rd August in Kenosha, Wisconsin. He was trying to enter his car at the time, in which his three children were seated.

According to reports, police were called to a domestic incident which Blake had been trying to help break up.

Blake’s family have now given powerful pleas for justice at a press conference in Kenosha, during which his father detailed how bullets severed Jacob’s spinal cord and shattered multiple vertebrae, leaving him paralysed from the waist down. 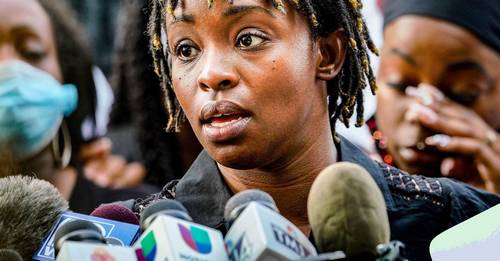 Then came Letetra Widman’s statement, which was delivered with remarkable strength and solemnity.

We are human, and his life matters.”

Widman continued: “So many people have reached out to me telling me they’re sorry that this happened to my family. Well, don’t be sorry. Because this has been happening to my family for a long time…

“It happened to Emmett Till; Emmett Till is my family. Philando Castile, Mike Brown, Sandra Bland… This is nothing new.

“I’m not sad, I’m not sorry. I’m angry, and I’m tired. I haven’t cried one time. I stopped crying years ago. I am numb. I have been watching police murder people that look like me for years.”

Blake’s mother asked for prayers on his behalf and his father read Al-Fatiha, the first chapter of the Quran, through tears.

Benjamin Crump, the family’s attorney, said: “It is going to take a miracle for Jacob Blake Jr. to ever walk again”. Blake was in surgery at the time, as Crump said he’s “struggling to sustain his life and to hopefully become some resemblance of the man he once was.”

Meghan Markle’s Nickname For Archie Has a Deeper Meaning Than You’d Think!