Jennifer Lopez and Alex Rodriguez have been dating for a while now and it looks like they’re about to take the next steps in their relationship, judging by J-Lo’s latest Instagram photo.

The 48-year-old icon took to the platform to post a loved-up photo of herself with Alex, relaxing on a beach and turning us all green with envy. But fans were quick to notice a rather large rock on her ring finger…

If she is engaged, we’re so happy for her!

Celebrity engagement rings: The rich famous have it SO good ? 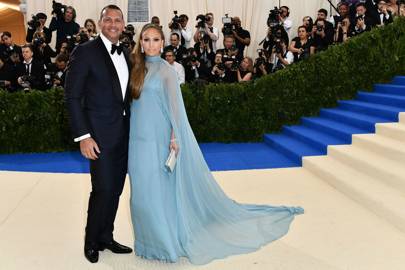 The pair made their first official debut at the Met Gala in 2017 – so chic!

Alex then gushed about J-Lo on live TV as well – which makes us love him even more. He dished out all the compliments during his visit to The View.

“It’s obvious,” Rodriguez said after the hosts jokingly asked who he was dating. “We’ve been having a great time.”

He replied: “We’re having a great time, she’s an amazing, amazing girl. (She’s) one of the smartest human beings I’ve ever met, and also an incredible mother.”

He also revealed Jennifer’s guilty pleasure, saying: “She would kill me if I said too much,” he said, before spilling that she indulges on “chocolate chip ice cream and chocolate chip cookies.”

Watch the video below…

Alex is famous in America for his career in baseball as a former New York Yankees player and Fox Sports reporter. The duo was first spotted together at J-Lo’s Las Vegas residency show. Not long after they were hanging in Miami, where A-Rod lives with his two daughters from a previous relationship.

We’re happy for you J-Lo!