Jane Struthers is one such example and is so convinced by the power of the moon that she’s penned an entire book about how to tap into its power.

The world of wellness has been rocked by crystals, spirituality and now, the power of the moon.

From our periods and mood to beauty regime, experts claim the moon can have a huge influence on countless areas of our lives.

“The moon doesn’t just affect the tides – it also affects every living organism, our moods and our decision-making,” she says. “Whether you want to make a good impression at an interview, start a new business, get married, try for a baby, buy a property, sow seeds or harvest crops, matching the right action to the appropriate lunar phase will ensure the best results.

“There are auspicious days for all big decisions, according to their nature. Whatever your needs and desires, never underestimate the help you can receive from the power of the moon!” 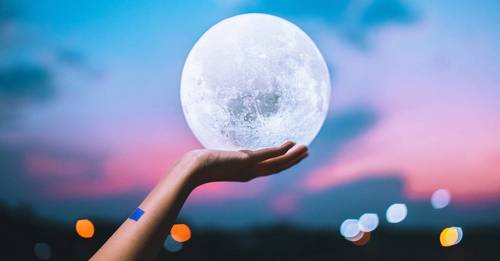 Intrigued? Jane has shared 5 ways to tap into the power of the moon and use it to your advantage…

How the moon affects us

If you’ve ever dithered when choosing the right time to do something, or wondered why all your plans collapsed in a heap even though you seemed to be doing everything right, you need to pay attention to the moon. It could make all the difference to your life.

Before we reach the exciting bit about astrology, let’s get the astronomy out of the way first. Here’s what you need to know. The moon is the fastest moving planetary body in the solar system, whizzing through each zodiac sign in a mere 2½ days before shooting on to the next. And there are 12 signs, of course, so it completes its journey through the zodiac once every 29½ days. What’s more, the moon is in a perpetual dance with the Sun, creating eight phases of the moon, including the new and full moons.

In astrology, the moon represents our moods, habits, emotions and instincts, and as it spends such a short time in each sign this means our emotional weather is always changing. The decisions we make and the actions we take are also affected by the phases of the moon. So if you want to get your timing right, the answer is to work with the moon. Following its monthly phases is a great way to start. Here are five ways to do it.

Dream and plan at a new moon

New moons are all about beginnings, so they’re a fabulous time to think about starting something new. However, don’t act yet! This is the phase for planning, dreaming and being open to the notion that change is in the air. Tailor your ideas to fit the themes of the sign of the new moon, so you’re completely in synch with its energies. For instance, the new moon in Capricorn is when you should focus on projects with a Capricorn flavour, such as doing some hard work or facing up to responsibilities.

Get going at the first quarter moon

One week after a new moon there’s always a quarter moon. That’s the moon that looks as though it’s been sliced in half vertically. You’ve now got the energy and buzz to get going on whatever you planned at the New Moon. However, there could be a few clashes with people who don’t like your ideas, so prepare to explain or defend your plans.

An ending at a full moon

When there’s a full moon, the message is to bring things to a close or at least complete one task before moving on to the next. Again, match these activities to the flavour of the sign occupied by the full moon. So a full moon in Leo, the sign of love and creativity, might mean finishing an artistic project or calling a truce with someone who’s driving you up the wall.

Busy, busy, busy! Expect to be doing several things at once, so you might feel stressed out because you’ve got so much going on. It’s the perfect time to take stock of your current situation, and it’s also great for working hard at any projects that are almost finished. If you’ve been thinking of getting in touch with someone you used to know, grab the phone.

Think of an eclipse as a supercharged version of an ordinary new or full moon. At a solar eclipse you follow the rules for a new moon, and you treat a lunar eclipse like a full moon. But timing is everything! Make sure you wait for at least 24 hours after an eclipse is exact before doing anything important, otherwise its powerful energies may wipe out whatever you were intending to do. An eclipse can be a really tense time, so try to stay calm and avoid over-reacting. A problem can feel like a crisis or someone might stir up a monumental fuss, but that doesn’t mean you should let yourself be sucked into another person’s drama. Keep your cool!

Killing Eve has already been confirmed for a third season, here’s what you need to know