On Tuesday, February 4, Lauren B. Brown tweeted a series of photos in which she’s wearing colourful false lashes that match the lip colour she’s wearing in each picture: a rich purple, a sunny orange, and a vibrant royal blue.

In the fourth photo, instead of matching her lashes to the toasty brown lip shade she’s wearing, her eyes are surrounded by a full rainbow of colours. “Never going back to black lashes!” she wrote.

It has taken me nearly 41 years – over a decade of which has been spent as a beauty editor – to feel confident putting on false lashes. Seriously, it’s just in the last few weeks that I finally nailed it. And it looks like I figured it out just in time because a makeup artist is going viral on Twitter for her colourful take on big, beautiful eyelashes – and I want in on the fun.

The tweet has caught Twitter’s collective eye, liked more than 100,000 times in a single day, and garnering 14,000 retweets in the same time frame. “The rainbow lashes knocked me out of my chair,” one person responded. “Might’ve just changed the game,” another said.

Brown shared a quick look at her process on TikTok, showing that that reason her lips so perfectly match her lashes is because she coated the lashes in the same liquid lipstick and eye shadow. 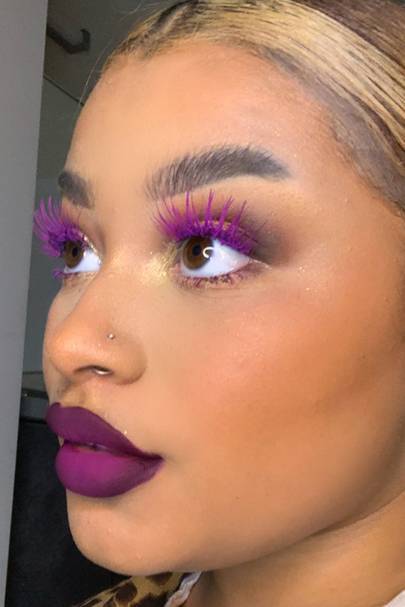 It’s worth noting that cosmetic chemists advise against using makeup products intended for the lips on or near the eyes because not all pigments that are approved for use on the mouth are considered safe for the eyes. “Using unapproved colorants around your eye could even lead to blindness,” cosmetic chemist Randy Schueller has told us. “Colours intended for use around the eye have to be specially approved by the FDA.”

If you want to re-create the look but don’t want to take any chances when it comes to eye safety, use only eyeshadow to coat false lashes. However, if that doesn’t give you the vibrancy you seek, there are other alternatives: Lashify’s Prismatic Gossamer Lashes come in a wide range of fun shades, and Ardell Color Impact Lashes come in bright hues for under $10 a pair. And, of course, there’s always coloured mascara, like the Allure Best of Beauty Award-winning Colourpop BFF Mascara.

No matter your approach, Brown is just thrilled that people have loved the looks. “As an artist, having your creations go viral is always a proud moment. I did not realise how many people would be excited about trying it out,” she tells us. “I was glad I could provide product recommendations and a tutorial so everyone can achieve colourful lashes. It’s a fun look that any and everyone can pull off.”

I’ve tried 15,000 beauty products in my time as a bridal beauty editor and this is what I’ve learnt