Charlotte Smith, from North Yorkshire, was diagnosed with acute lymphoblastic leukaemia when she was 11 weeks pregnant.

A 22-year-old cancer victim has died months after she was urged to abort her baby to boost her chances of survival.

But doctors warned giving birth posed a danger to her life and they advised her to terminate her pregnancy.

Mrs Smith, then 21, decided to go ahead with the abortion and began grueling bouts of chemotherapy that same day.

She died yesterday morning from an infection that led to sepsis, following her tireless battle with the form of cancer that strikes around 800 people each year in the UK. 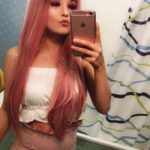 Charlotte Smith, from North Yorkshire, was diagnosed with acute lymphoblastic leukaemia when she was 11 weeks pregnant

Her story came to light after The Daily Mirror reported her story in August, as she called for routine blood tests on the NHS.

Mrs Smith relentlessly campaigned for them as she said her cancer was only spotted because of the ones she had in pregnancy.

Tributes have today flooded in for Mrs Smith, as grieving friends described her as an ‘amazing woman’ and ‘so inspirational’.

Mrs Smith’s death was revealed on Facebook by her close friend Jordanna, who wrote: ‘Well, I never thought id ever in a million years be having to write this.’

Her heartbreaking post continued: ‘A lot of you may have seen Charlotte’s post about her going into hospital this morning.

‘She is my best friend and has been for many years, she has sadly passed away, she had an infection and couldn’t fight it.

‘I’ve been to see her little face, she is at peace now, I’m with her mum and her husband we are all trying to stay strong.’

Jordanna, who made Mrs Smith’s Facebook account public in the wake of her death, added: ‘She was a little fighter but couldn’t fight much more.’ 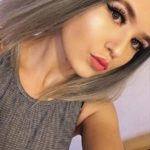 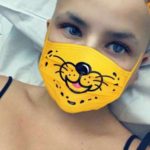 Mrs Smith, then 21, decided to go ahead with the abortion and began grueling bouts of chemotherapy that same day

Abbie McMahon, who met Mrs Smith through Facebook, described her as ‘one of the loveliest girls ever’.

Adding that she was ‘so inspirational, Miss McMahon wrote: ‘Found out last night about this gorgeous girl and I’m still just in complete shock.

‘She was so kind-hearted and positive even after everything she went through. She will be remembered for being such an amazing woman, and will be very missed.’

Emma Devlin, a friend of Mrs Smith, posted six photos alongside a poignant post that revealed she was ‘hurting so bad right now’.

In her gut-wrenching message, she asked: ‘What do you do when you lose your best friend? The one who was always there?’

She continued: ‘I have no words, this is one of my biggest losses and I am breaking right now… You were the strongest girl I’ve ever met in my life.’

Aimee Spilsbury, another friend of Mrs Smith, wrote: ‘Literally cannot put into words how speechless I still am, how God took away this beautiful girl so soon.’

She died yesterday morning, following her tireless battle with the form of cancer that strikes around 800 people each year in the UK

Abbie McMahon, who met Mrs Smith through Facebook, described her as ‘one of the loveliest girls ever’

Aimee Spilsbury, another friend of Mrs Smith, wrote: ‘Literally cannot put into words how speechless I still am, how God took away this beautiful girl so soon’

When was she diagnosed?

Mrs Smith told The Mirror in August how her pregnancy came as a shock and was initially free of any medical issues.

However, after just a matter of weeks she began to feel ill, suffering from back pain, bouts of vomiting and tiredness.

She put it down to ‘the pregnancy’ – until a routine blood test after 10 weeks found an abnormality and doctors became concerned.

Mrs Smith was given the diagnosis of acute lymphoblastic leukaemia the next day and a treatment plan was drawn up.

She told the newspaper at the time: ‘The only thing I was bothered about was the baby. But it was either my life or the child’s, and I didn’t want to die.’

Agreeing to an abortion

Mrs Smith agreed to have a termination, as part of a request by medics, with the promise of having an ultrasound to see her baby first.

A first round of chemotherapy, which began immediately, proved unsuccessful and the second round led to her being admitted to intensive care.

She was given a bone marrow transplant, a common form of treatment, when her brother was found to be a match.

Her friend Jordanna wrote on Facebook: ‘Her immune system was low so she got an infection.’ She added that this led to sepsis and she ‘deteriorated fast’.

Mrs Smith’s petition has so far amassed nearly 6,700 signatures. The issue has to considered for a debate in Parliament at 100,000 backers.

Anyone willing to sign it can do so here.

Mrs Smith agreed to have a termination, as part of a request by medics, with the promise of having an ultrasound to see her baby first

WHAT IS ACUTE LYMPHOBLASTIC LEUKAEMIA?

There are two different types of white blood cells – lymphocytes and myeloid cells. They work together to fight infection.

But in leukaemia, the process gets out of control and the cells continue to divide in the bone marrow, but do not mature.

These immature dividing cells fill up the bone marrow and stop it from making healthy blood cells.

As the leukaemia cells fail to mature, they cannot work properly to fight infections.

This leads to an increased risk of infection, and because the bone marrow cannot make enough healthy red blood cells and platelets, symptoms such as anaemia and bruising can occur.

There are four main types of leukaemia:

Chronic forms of the disease tend to affect adults and are very rare in children.

Acute lymphoblastic leukaemia is specifically a cancer of the immature lymphocytes, called lymphoblasts or blast cells.

The causes are not yet known but studies have found identical twins and brothers and sister are at an increased risk of the disease.

Symptoms are similar to other forms of leukaemia, and include:

Boy, 8, undergoes bone-stretching surgery to fix one leg which was forcing him to walk on his toes

‘I am my own twin’: Model, 33, has a two-tone birthmark after ABSORBING her sibling 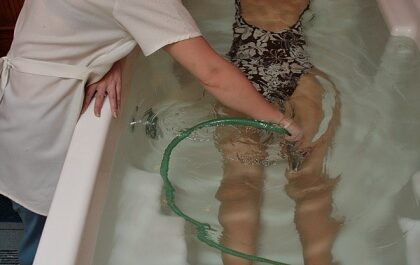