Starting June 8, some of Brooklyn’s most interesting architecture will be found indoors. Over 200 works by Dutch artist M.C. Escher – best known for his mind-bending sketches and tessellations – will take over Brooklyn’s Industry City for ESCHER, a show celebrating the growth and evolution of the Dutch artist throughout his career. 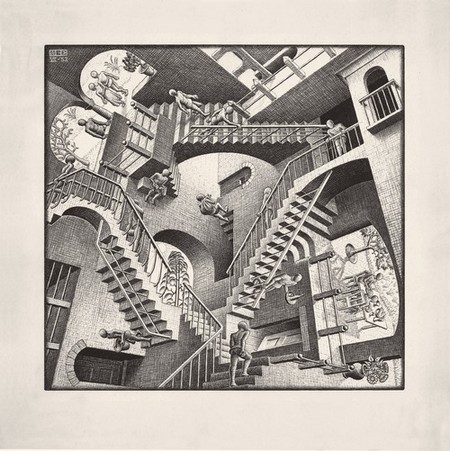 Though some might mistake Escher for a psychedelic dreamer type (the hippie movement co-opted his more hallucinatory pieces), he was grounded in reality. Escher’s real focus was geometry, toying with the physical landscape, while his background in graphic design sparked an interest in where optical illusions and architecture meet.

Arthemisia’s Sergio Gaddi says, “He’s interested in the structure of the world, and that’s architecture.”

The show’s seven sections conclude with “Eschermania,” which shows bits of Escher’s work that have seeped, perhaps unknowingly to many consumers, into popular culture. Think the cover of Pink Floyd’s On the Run, the impossible staircases of Escher’s Relativity, first printed in 1953.

Most of us have crossed paths with Escher’s works on postage stamps, T-shirts, or even an episode of The Simpsons. “Don’t just think about the name, think about the image of Escher,” Gaddi adds. “It belongs to our collective imagination much more than we can even think about.”