“For those few interested at an in depth look at hair growth, post chemotherapy for #hsct. I cut my hair short to transition myself and my son for impending baldness. Easy. Baldness came. I didn’t shave head to that end. Of course it fell out. Shiny.

Pale dome. Nice enough,” Blair explains in a caption accompanying a close-up photo of the top of her head. “It took two months to begin regrowth And it came in fine and pale and very sparse. I shaved it. It looked too sad. For me.”

Although chemotherapy is widely thought of as a way to treat cancer, it can also be used to fight other diseases. In 2015, Selena Gomez announced that she’d undergone chemo for lupus, and this year, Selma Blair has been open about her journey with multiple sclerosis, which has included chemotherapy and one of its common side effects: hair loss. Recently, Blair has been seen in her Instagram photos with very short, grey hair – an indication that it has been growing back since completing treatment. However, it was on November 4 that the actor opened up about adjusting to her new look.

Blair goes on to explain that as she let it grow, she discovered that dyeing it back to the brunette colour she’d had for much of her life wasn’t really her best option. “It was patchy in colour and I felt like dying it brown. Ridiculous! I really only succeeded in dying my scalp,” she writes. “After a week, I buzzed shorter with clippers and a few weeks later, here we are ?. A thinnish, patchy charcoal head.” 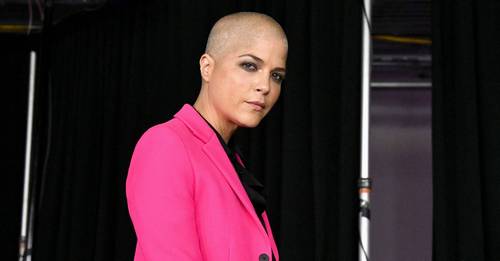 Blair hasn’t decided what she’s going to do with her hair, but for now, she’s embracing her grey buzz cut – much to her own surprise. “I will see how a pixie grows in. Or I will buzz again. It seems to be too much to have long hair again.

So I will leave it short and grey, something I have never before wanted to do. I equated it with giving up. And maybe giving up long, brown hair, complete with time consuming and expensive highlights and lowlights isn’t necessarily a give up. Give in. Embrace. Sure. I’ll try it.” Though she jokes that she’d be willing to try dyeing it again if “some fancy pants company with a thick checkbook wants to entice me out of dye retirement. Then I will sing about the glories of processed hair.”

While she may not be used to seeing herself with super-short grey hair, she undeniably looks like a total badass in the style – and the comments reflect that. “I think it looks great like that!! You have the face for very short hair. ??” one fan wrote, while another commented, “If I may say so, I truly love your hair like this.” And even if Blair does get a hair-colour sponsor, what another fan said definitely rings true: “I looove your hair short and how you look, and it’s okay for it to be grey, you look awesome.”