While some will, indeed, go to a yoga class and snaffle an unappetising bowl of quinoa in an attempt to reach ‘peak wellness’, others will treat themselves to a massage or forgive themselves for that extra slice of pizza.

‘Wellness’ is fast-becoming a more popular buzzword than both ‘Veganuary’ and ‘sustainability’ combined, but – as is the case with many such movements so often referenced in an attempt to seem culturally conscious – the exact meaning of it has become blurred.

I’d tried them all, but didn’t discover the *true* meaning of the notion until I visited Canaves Oia in Santorini… and I only went for a quick burst of sunshine.

I think that was the most important lesson I learned at this beautiful boutique retreat, which – crucially! – doesn’t bill itself as a wellness escape. Sometimes our incessant desire to practice wellness, is in fact what prevents us from doing so. After all, whichever definition you refer to, wellness is generally a sense of contentment in every area of your life, and a desperate desire to reach such a state is likely to leave you feeling inadequate in at least some areas.

As I stepped aboard the plane to Santorini shoveling a shaking fistful of herbal anxiety medication into my mouth (I’d never take anything stronger abroad as the fear of being arrested upon landing only heightens the angst) and wide awake with panic (despite a sleep ban 48 hours prior in the hope of snoozing through these four hours spent 36,000 feet higher than I’d like) I didn’t even consider my now-obvious need for improved ’emotional contentment’. I hate flying. This was my normal. 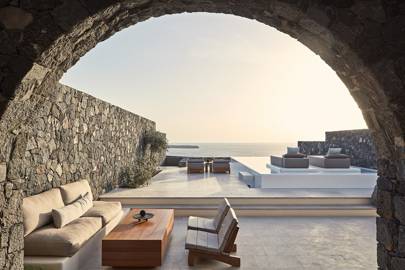 Once we’d landed my heart rate returned to a relatively regular pace, and one of the lovely drivers from the Canaves Oia team picked us up and drove us through one of the most idyllic landscapes I’d ever seen; bright, blue ocean immediately out of the right window, and lush, green grass with animals grazing out of the left. I was already more peaceful than I’d been in weeks, and realised once we’d arrived that I hadn’t picked up my phone once during that half hour journey – not even to take a picture. Progress already? 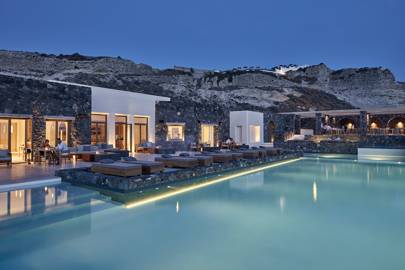 The physical seclusion of the Epitome Suites was exactly what we were looking for – no raucous parties for us this weekend thank you v much – but the feel of the place couldn’t be further from isolation. Every single member of staff, from George the shuttle taxi driver to Evangelia on the front desk and hotel manager, Vasilli, made us – and, as far as we witnessed, every other guest – feel like family. 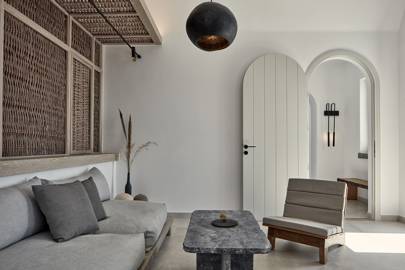 Nothing was too much trouble, they weren’t overbearing or pushy but were always available within seconds of needing them. They weren’t judgy when we asked for recommendations for the best spot in town for sunset pictures. They were wildly knowledgable about the most beautiful restaurants on the island, but didn’t flinch when we asked where we’d find the cheapest, cheesiest pasta (needs must).

Rather than an impersonal buffet-style breakfast, there is a set menu of rustic local cuisine that really feels as though it’s been rustled up by your long-lost Greek aunt. You can have this brought to your room to eat by the pool at no extra cost or fuss, which is heavenly for those mornings you just can’t muster up the strength to swap your PJs for a day dress. 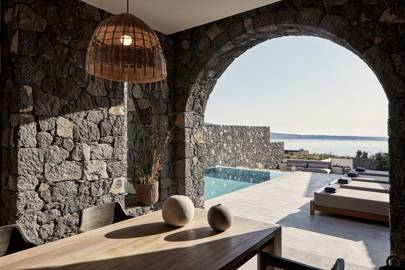 It’s not just the staff that make you feel right at home, but even the way the suites are designed suggests that Canaves Oia doesn’t take itself too seriously. This was proven immediately by the basement bedroom’s ‘window’ straight into the depths of the private pool which our host excitedly rushed to show us the minute we arrived. Endless hours were spent diving in, striking poses (me) while one of us (him) watched on from downstairs trying desperately to capture a serene shot amidst the flailing. 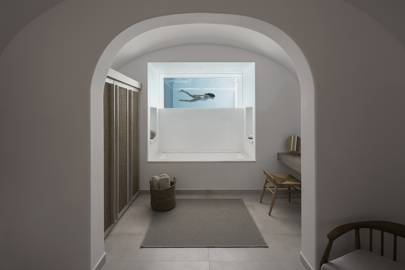 The hotel itself is pure, unadulterated five star luxury. But not the type you’d see in a James Bond film with helipads on the roof and daunting 50ft-high ceilings – this is real-life luxury.

A private pool (or hot tub) per room, deep, cushioned sun beds, underfloor heating (if/when needed), a choice of foam, feathered or orthopedic pillows, uninterrupted sea views from every room… this is luxury without the intimidation. 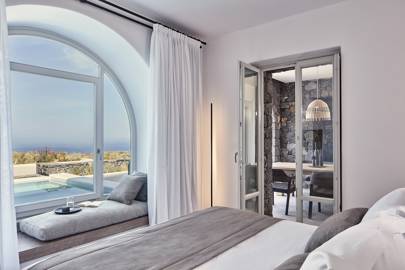 Canaves Oia Epitome’s culinary offering has found a similar balance of approachable exquisiteness. It’s main dining restaurant, Elements, is unarguably ‘fine dining’, but with the familiarity of your favourite local.

With an earthy, chic interior perfectly in-keeping with the rest of the hotel’s aesthetic – and one of the best sunset views on the entire island – one of the chefs came over to our table with all the tools and ingredients needed to rustle up a tomato arancini-like bite in front of us as we browsed the menu. 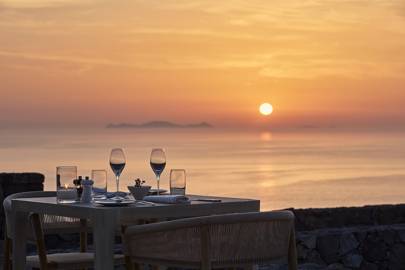 The master chef then went on to serve up smorgasbord of lobster and cod dishes for my fish-fanatic partner, and a meatier offering for myself (quail and goats cheese ‘burger’ and a melt-in-the-mouth pork cheek stew).

Being a renowned fussy eater these tasting menus tend to fill me with dread, but there was something about the relaxed atmosphere and low-key, friendly service (and, no doubt, exceptional chef) that meant I not only happily tried new foods, but wolfed them down. 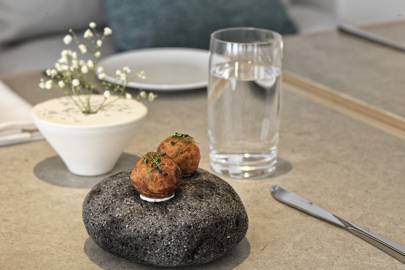 If we ever wanted to venture to the town, Evangelia would contact George and the complimentary shuttle would be there in minutes. One such time, we took advantage of the service to visit sister hotel Canaves Oia Suites’ Petra Restaurant.

What I thought might be a quick bite to eat in new surroundings ended up being almost a three-hour extravaganza, with most of our time spent staring out across the edge of the restaurant which sat over a sheer cliff-drop into the Mediterranean Sea. The food – the beef ragu in particular – was utterly exquisite, but it’s the thought of that overwhelming view that will stay with me forever. 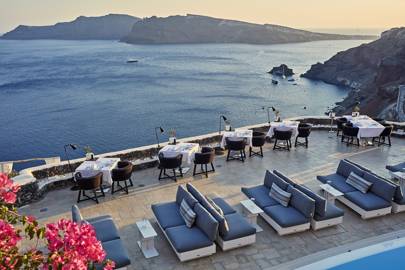 We then ventured into the in-built cave-like corridors within the cliff and made our way to one of the sweetest, most unassuming spas I’ve ever stepped foot in.

Far from the stark, showy spas you get in most hotels, this one felt so familiar and welcoming that I almost didn’t baulk when my masseuse suggested I lay *entirely* naked (I prudishly refrained, however). One heavenly hour later and I was starting to feel as though I were dreaming, as I slunk back out into the domed, dimly-lit corridor. 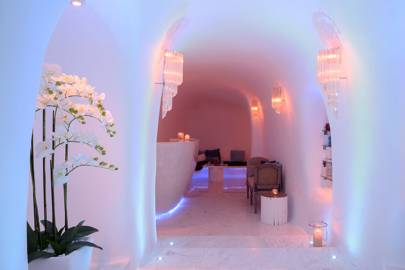 With full bellies and un-knotted backs, we just had to give Evangelia a quick call when we were ready to return and George would re-appear as if he’d been waiting there the whole time.

On the quick trip back to our suite for one final night, I was staring out of the window at the vast ocean and felt a complete physical and emotional weightlessness that I don’t remember feeling properly for at least four or five years. Realising this made me shed a tear, and is making me well-up again as I write. 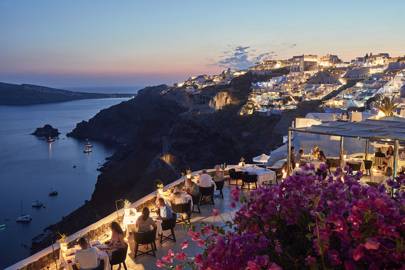 I boarded the flight home the next day without even a moment’s hesitation. The single-room airport with shed-doors for ‘terminals’ didn’t worry me. I threw my luggage onto the belt without fearing for its future. And the hour-long queue to get *inside* the ‘airport’ (flight by flight) even made me laugh.

I slept throughout that flight, and I wasn’t even tired.

I felt more emotionally, physically and spiritually ‘well’ after three days spent in the moment than I have after months of yoga sessions and long baths.

Time out in a new environment which was as comfortable and welcoming as it was beautiful gave me a sense of perspective that’s lasted a lot longer than the long-weekend away. Which is why I’ve decided that wellness isn’t so much something that you can actively strive for in quick, tangible bursts, but rather the abstract result of treating your body and mind kindly, and not pressuring yourself to have it all figured out.

How wild swimming cured my anxiety