What unites Viktor Pelevin, Carlos Castaneda and the inhabitants of Siberia? I’ll venture to assume that this is a huge love for mushrooms. Thank God, white mushrooms with stiff legs and velvety hats do not expand consciousness and do not cause hallucinations.

But they are perfectly eaten in boiled, fried and marinated. Placers slippery oily and red families of chanterelles please mushroom pickers no less than a large catch of inveterate fishermen.

Usual gastronomic pleasures – soup of white mushrooms, fried potatoes with poderezozikovami and pickled honey agarics – in no way inferior to the French julien with champignons and Japanese siitake on the grill.

Since ancient times, the fungi have been surrounded by a mystical aureole. In Latin America, they occupied a central place in various rituals. Many believed that mushrooms have special properties that open unusual abilities for a person. The subtle taste of mushrooms was so appealing to the pharaohs of Egypt that they declared them to be a dish of the nobility – ordinary people do not have mushrooms. 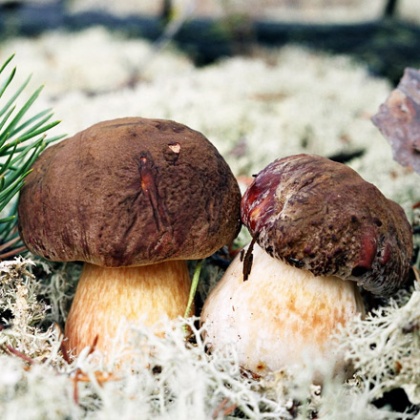 Different cultures have many interesting versions of the origin of the fungi. For example, in Tajikistan it was believed that mushrooms are heavenly lice that the Great Mother shook out of her gown. One African tribe has a legend according to which both the earth and the sky originated from the cap and stem of the fungus. Piquant theory of the origin of people among the Kets, a small people of Siberia.

Once the god Yesay planted seeds in the ground – with his left hand he scattered the seeds of men, and the right – of women. First, women and men lived separately: women – in plague, and men grew in the forest in the form of phallus-fungi. When women had a desire, they visited their “mushrooms”. One intelligent woman got tired of going to the forest every time, and she tore out the phallus mushroom and brought it to the plague, soon the phallus turned into a real man. After that, other women followed suit and dragged the peasants home. As a result, the remaining forest phalluses withered and turned into habitual mushrooms.

In the Russian cuisine, mushrooms are often found. A special place is occupied by salted and fried. And if with salting it is customary to salt each kind of mushrooms separately, then during the frying the variety is welcomed.

Dilute the mushrooms “blue blood” (white, boletus) less noble (oily, moss, chanterelles), and you will get an incomparable fragrance. Fried mushrooms can be served as a side dish or sent to a pie. Stewed mushrooms can be an independent dish, and can make a company of fish, meat and vegetables. But in a cooked form in Russian cuisine, unlike the Belarusian and French mushrooms are rare – except in soups.

Speaking of mushrooms and French cuisine, it’s a sin not to remember the julienne. Julien really has to do with the homeland of the Eiffel Tower, French julienne means “July”. But this all ends. Why mushrooms with chicken, buried under a layer of marshy cheese, called this way, no one knows. Apparently, because of the method of cutting, because in French cooking, a jug called a form of cutting. It is close to our “straw” – the effect is achieved with a sharp knife, which cuts long “straws” 3 mm thick. Thin little pieces of different vegetables can easily be picked up with a fork (or a spoon – after all, there are soup-julienes) to feel the whole taste range of products mixing in the mouth. 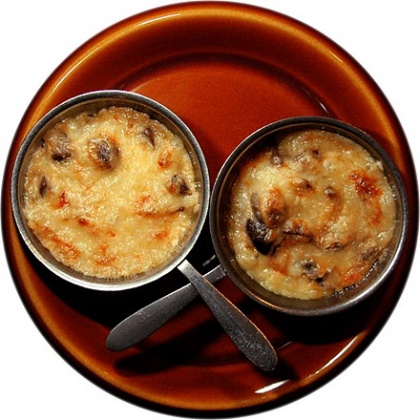 For julienne of mushrooms, you will need:

Cut the peeled mushrooms. Preheat in a frying pan 2 tbsp. of vegetable oil and put out the mushrooms for 10 minutes. Form the broth pour into a bowl – it will still come in handy. Onions finely chop and add to the mushrooms, along with the remaining 2 tablespoons. oil. Cook for 15 minutes. In sour cream, pour the flour and mix thoroughly so that there are no lumps. Add the mushroom broth, salt and pepper. Stir well and pour the finished sauce into the mushrooms. Stew on low heat for 10 minutes. Coat the garlic with garlic, lay out the julienne and top with grated cheese. Place the coconut in deep form. In the form, pour a little water and put on 15 minutes in the oven, heated to 200 degrees.

Let’s return from France to Russia. Dumplings long ago became a bachelor dish, sold in packages. But dumplings with mushroom filling, and cooked in an unusual way, can make a variety in your menu. For the first time kundyums (or kundyubki) – this is what this dish is called – described by the master of cooking, William Pokhlebkin. They were prepared in the XVI century.

From the dumplings we are familiar with, the kundyums differ not only in the filling, but also in the dough – it is kneaded in vegetable oil and hot water.

The filling consists of fresh or dried mushrooms and cereals (rice, buckwheat) with spices. And most importantly – kundyums are not brewed, but first baked, and then doused in an oven in clay pots.

For kundyumov you will need :

Filling
Boil the mushrooms, broth in a separate bowl, and mushrooms finely chop and fry with finely chopped onions. Stir mushrooms with a porridge and chopped steep egg and stir well.

Dough
In sunflower oil, pour boiling water into this mixture, pour in the flour and quickly knead the dough, kneading it well with your hands. Roll out a very thin layer (almost to transparency) – with no need to pour the flour, tk. the dough does not stick to the board.

Roll the dough into squares 5 by 5 cm. For each square, put the filling and form pelmeni. Of the specified number of products should be 100 pel’menis. Lubricate the baking sheet with oil, lay on it kundyumi and bake in the oven on moderate heat for 15 minutes. Then dumplings are transferred to a clay pot, pour hot mushroom broth, salt, add spices and put in the oven. After 15 minutes, fill the ready-made kundyum with sour cream and put it on the plates.

Mushrooms are not only a summer forest and the flavor of a plate. But also one, and even two hours of processing, when the extraction moves, is washed and cut off. All the above-mentioned dishes can be found already ready. You can get rid of julienne and dumplings with mushrooms in the Bratina restaurant. Julien there costs 110 rubles, and dumplings in a pot – 190. In the menu of the cafe “Kolyada” there is a julien with mushrooms and tongue for 95 rubles and with chicken and mushrooms for 80. Pelmeni with mushrooms, again, in a pot, you can taste there for 110 rubles. Bon Appetit!