Here, we talk to the psychologists and mental health experts to find out everything you need to know about the condition, including the symptoms to look out for, the causes and the treatment options available.

We all know that squeezing spots can be seriously satisfying (there’s a reason why Dr Pimple Popper has 6 million Youtube subscribers). But for some, skin picking goes way beyond popping the occasional pimple.

For some, it is a complex physical and mental health disorder known as excoriation disorder, which can be debilitating, damaging and disruptive to every day life and overall wellbeing.

Also known has Dermatillomania, excoriation disorder is a skin picking disorder that involves regular picking, involuntary picking and injury caused by picking. Sufferers may find themselves picking their skin regularly, sometimes every day, and for significant amounts of time, sometimes several hours per day.

The most common areas are picked at are the face and arms, but many sufferers pick skin irregularities like moles, freckles, spots or scabs and scars from previous picking. Usually, individuals use fingernails but excoriation may also include the use of tools like tweezers or scissors as well as scratching, biting and squeezing.

WHAT ARE THE CAUSES?

“These days, we tend to believe that it may be a combination of genetic, biological, and behavioral factors,” explains Dr Fred Penzel, clinical advisor of Anxiety UK. “No one has, as yet, identified a specific cause. There may even be more than one, with different subtypes. Also, there can be many potential inputs and triggers, so the clinical picture can be an even more complex one.”

Dr Penzel explains that until recent years, research was hampered by the fact that this disorder didn’t even have an official name. “It is now known as ‘Excoriation Disorder,” or ‘Skin-Picking Disorder.’ We think people may start out with a predisposition to have this problem, but what exactly sets it off at any given time, no one can say for sure.” 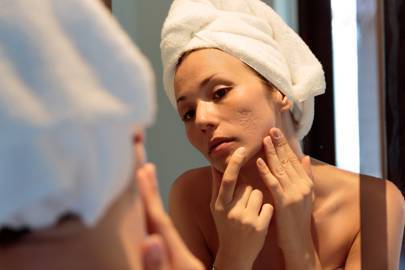 WHAT ARE THE SIGNS?

According to psychotherapist Emmy Brunner, there are a number of warning signs in someone who has developed excoriation. “Frequent picking can leave the skin covered in lesions and scars, so sufferers will avoid situations where they have to expose their skin, like the beach or the gym,” she explains. “Sufferers can be hyper-critical of their looks and will often scratch or rub at the skin to remove perceived imperfections.”

Plus, there may be behavioural changes. “Some people spend large amounts of time picking, for some this may be several minutes a day and for others, it can be hours. Either way, their behavior can have significant disruption to their social and professional lives.”

WHEN DOES IT BECOME A PROBLEM?

We all pick and scratch at ourselves, but this doesn’t mean we have compulsive skin picking disorder. So, when exactly does it become a problem? Well, according to Dr Penzel, skin picking becomes a problem when it starts to cause noticeable damage. “If it starts to affects a person’s physical or emotional heath, or when it begins to affect an individual’s ability to function, we would call it a disorder,” he says.

WHAT ARE THE TREATMENTS?

“Currently, the best approach is what we call Comprehensive Behavioral Therapy,” says Dr Penzel. “This treatment makes a very careful behavioural analysis of the problem, and tries to identify and understand all the various inputs and triggers that lead to the problem in question. The factors it studies would include sensory issues, cognitive factors (thoughts and beliefs), affect (emotional states), motoric issues (physical actions and postures), and environmental factors to tailor a treatment package of behavioral and cognitive techniques to each individual and their particular set of inputs.”

However, other treatments options have proved less effective. “Talk therapy has been shown to be relatively useless in treating BFRBs,” explains Dr Penzel. “Prescription medications have not been shown to have a particularly robust effect in treating BFRBs, as has been demonstrated by existing research. They may be beneficial in treating anxiety, depression, OCD, and other coexisting problems that are aggravating the BFRB, but will not help the BFRB directly.”

Anxiety UK offers a wide range of support including a national, reduced cost Approved Therapy Service with therapists trained in cognitive behavioural therapy, (CBT) clinical hypnotherapy and counseling all available either face to face, on the phone or online.

Why going sober is the wellness trend to try in 2020

When hair-pulling, skin-picking and nail-biting becomes a serious disorder