The role of First Lady is, admittedly, a tricky one to get excited about. It is an unelected position with no precise remits or powers (save the White House Christmas decorations of course) and one that feels somewhat knotty in our current political climate.

It is, after all, a job that asks that you are defined by your husband’s job, that you become the doting woman behind a powerful man.

This weekend, the world exploded as Joe Biden beat Donald Trump to become the 46th President of the United States. History was made in many ways; Biden received the most votes of any presidential candidate in the history of American politics, he will also, at 78, become the oldest president elected and, of course, Kamala Harris, becomes the first female, first Black and first South Asian American Vice President.

But, come January 20 2021, America will also have a new First Lady: Jill Biden. So, what do we know about her?

However, many First Ladies have expertly defied this categorisation. Think of Hillary Clinton and Michelle Obama; both lawyers and sharp intellects who became potent figures in their own right and, in Hillary’s case, a senator, a secretary of state and the first female presidential nominee for a major American party.

Whilst Jill Biden seems unlikely (or rather, uninterested) in running for office, she is a return to this mould- a working woman who fiercely maintains her individual identity and autonomy in the face of political commitments.This seems a stark contrast now, following the example set by Melania Trump, a woman who appeared to have little interest in her position and who most, perhaps unfairly, dismissed as a trophy wife; arm-candy for an extremely problematic president.

But with Jill heading to the White House, are we about to fall in love with another American political spouse? Will she become our new Michelle? 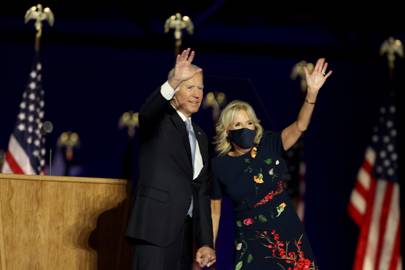 Jill is a lifelong teacher, in local state schools and community colleges as well as being a Professor of English. She never left her job and carried on teaching throughout Joe’s term as VP. The New York Times reported at the time that she never even pulled rank on her school; always asking permission from the principal to take time off work for White House commitments. Close friend Michelle Obama recalls that her strongest memories of Jill as Second Lady were of her “constantly grading papers” – even on the VP’s plane, Air Force Two.

She has said that, at 69, she has no plans to retire and, even as First Lady, she will remain teaching. When asked about this decision back in 2007, she famously quipped: “I want my own money, my own career, my own identity.”

Her romance with Joe is meet-cute x1000

Jill and Joe Biden began dating in 1975, after Joe saw a poster of Jill (who took a year out of university to model) and asked to meet her. His brother Frank knew her and set them up on a blind date.

Jill is quoted as saying she never thought it would work, as she was used to dating hippies and young guys her own age, and had even married her high school sweetheart, whom she had separated from a year previously. Joe was so different; nine years her senior and already a US Senator at the time. But after their first date; where they went to see a filmand he dropped her home and shook her hand goodbye, she called her mother and said: “Mom, I finally met a gentleman.”

She didn’t just marry Joe, she married his kids

Joe Biden famously proposed to Jill five times before she accepted. A large part of her resistance came from the fact that Joe came as something of a package deal.

In 1972, Joe tragically lost his first wife, Neilia and their one year old daughter Naomi (known as Amy), in a tragic car accident. His sons, Beau, 5, and Hunter, 3, were seriously injured. Joe Biden had just been elected to the US Senate and was sworn in at his son’s hospital bedside.

In accepting Joe’s proposal, Jill knew that she was also marrying his kids. She has said that she didn’t want them to “lose another mum” and had to be sure of her decision. Joe’s sons were the ones who encouraged him to propose, saying they were all “marrying each other.” In fact, when they eventually married in 1977 in New York, Beau and Hunter stood by them at the altar and even accompanied them on their honeymoon.

She considers Beau, an army veteran who tragically died of cancer in 2015, and Hunter, her children, just as much as her biological daughter with Jill, Ashley. Joe explained why she was never called a step-mother: “Neilia would always be mummy, but Jill was mom.”

Jill initially studied fashion merchandising (yes, that is Elle Woods’ major too) before shifting to study English. In 2007, aged 55, she received her doctorate in education making her officially Dr Jill Biden. She went on to teach widely- primarily in state education and community colleges- and even taught adolescents with emotional disabilities at a psychiatric hospital.

She remains a Professor of English at Northern Virginia Community College.

She knows how to make a point

When Joe was considering a presidential run in the 2004 election, Jill was so against the move that, when a group of political advisors were meeting at thier house, came out in a bikini with the word “no” written on her chest.

She changed her mind after George W. Bush won re-election due to her strong objection to the Iraq war, where her military son Beau had been deployed. It was Jill who urged Joe to run in 2008- an unsuccessful bid- but one which garnered enough support and recognition to lead to his role as Vice President under Obama.

Whilst she has largely kept a low profile in the 2020 campaign, she has had a few standout moments. She’s been commended for her adherence to social-distancing- often pulling Joe away from a crowd, she was said to be the driving force behind selecting Kamala Harris and she famously took-no-BS in an early 2020, pre-Covid rally, body-blocking her husband when protestors stormed the stage.

The marathon runner is a huge soul-cycle fan, and apparently even gets up at 5am on Christmas Eve to do a class.

She’s also something of a prankster. Her 2019 memoir details her rebellious youth and her grand-daughter Naomi has said she is “not your average grandmother.”

“She’s very mischievous,” she said, “When she’s on a run, she’ll come across a dead snake or something and put it in her bag…she’ll use it later to scare someone.”

The White-House better get ready for Dr Jill Biden.