Today, Lord Justice Fulford at the Old Bailey gave a whole life sentence to Wayne Couzens for the “devastating, tragic and wholly brutal” murder of Sarah Everard. This means he will never be eligible for parole, a sentence a police officer has never received before.

A small slither of justice has been served. But it will never be enough.

This week has felt heavier than most. I feel crushed. So does every woman I’ve spoken to. On the tube, I can see women reading the heartbreaking news of Sabina Nessa’s murder and the details that have slowly followed. Every woman I know is posting Susan Everard’s earth-shattering impact statement. Women around London are joining Sisters Uncut, an organisation protesting outside the Old Bailey this week as Wayne was sentenced.

Our Whatsapp groups are full of pain, of rage, of discussions around solutions. We’re sat around tables in bars and restaurants asking each other ‘so, what are our rights if a police officer arrests us, like Sarah? Can we ask for a phone call? Another officer?’ 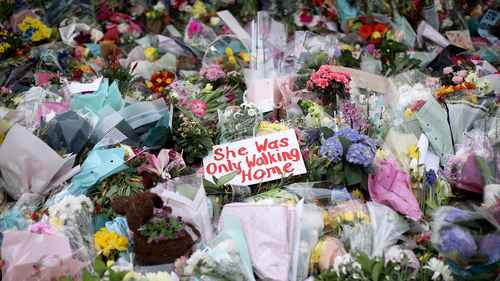 We’re asking: ‘How do you spot a violent man, when most women who are murdered are so by the hands of their partners?’. We’re talking into voids about the patriarchy, and how its breeding of toxic masculinity has a direct link with male violence. We’re asking why men kill more than women. We’re talking in offices about how we don’t feel safe commuting home, that now autumn is here and the nights are dark, that everything feels sharper. We’re crying about having to do so much; so many safety protocols in our daily lives that have no power to really stop us from being murdered. How Sarah wore running shoes. How Sabina was walking a public route, and only for five minutes.

And in all of these conversations, it struck me: Where are the men?

When we first heard of Sarah’s disappearance and then her murder in March 2021, women united – through vigils, through talking online, through having challenging discussions in our homes. I, like many women, tried to get the men in my life to engage – and some of them did, briefly. But here we are, six months later on the day of Wayne’s sentencing, hearing the disgusting details of what he did, and all the men around me are silent. Here we are, a week since Sabina’s murder. And, crickets.

We know that the only way that the culture of male violence will be ended is if men end it, and that includes the majority of men – who are nonviolent, who are kind, who wouldn’t hurt women

This is why women feel crushed. Because not only do we feel unsafe, we feel unheard. We know that the only way that the culture of male violence will be ended is if men end it, and that includes the majority of men – who are nonviolent, who are kind, who wouldn’t hurt women.

It’s an uncomfortable truth, but all men are complicit in upholding this environment where male violence has been allowed to take roots. The men who I have seen talk out publically have been laughed at or abused, like presenter Richie Brave who was called a ‘simp’. You just have to look on Twitter, at the replies to men talking about male violence to see how unaccepted it is between men.

When I’ve spoken about male violence, I often hear the ‘Not All Men’ argument back. I get comments and DMs on Instagram telling me that I’m painting men with the same brush. That I’m giving men a bad name. That most men are one of the ‘good guys’. But, then, if you are one of the nice guys or an ally to women, why are you silent on the actual issue at hand? Why are you derailing a conversation as important as this one to scream ‘Not All Men’ at women? When we’re not saying all men, we’re saying too many.

I, like most women right now, am lost for words. We’ve said it all, one hundred times over. We’ve lived it all, every day of our lives. All I’m left with at this point, is a plea: please, men, talk about male violence. Undo it. Look at the small ways you contribute to a culture that normalises it. Don’t get defensive, do the work. Engage with other men about it. Call out your friends. Because it’s on you – not us.