Loosely based on Deborah Feldman’s 2012 memoir Unorthodox: The Scandalous Rejection of My Hasidic Roots, the Netflix miniseries tells the story of 19-year-old Esther ‘Esty’ Shapiro who was born into a dysfunctional family within the ‘ultra-orthodox‘ Satmar Haredi Jewish sect in Williamsburg, Brooklyn.

Pregnant following an arranged marriage to her husband Yanky, Esty escapes to a new secular life in Berlin where she auditions for the Berlin Music Conservatory. Meanwhile, Yanky and his rogue cousin Moishe are sent to track her down and bring her home.

For the past three years, I’ve been converting to Orthodox Judaism which can take between two to ten years. The process requires me to authentically live and intensely study Judaism in its purest form under the London Beth Din, who preside over Jewish law. I have unfettered access into the intimate homes of the insular Orthodox Jewish communities, similar to those seen in the hit Netflix show Unorthodox. And I count myself lucky to have no less than six Orthodox Jewish rebbetzins (wives of rabbis) on speed dial. So, it was with great intrigue that I watched the show and people’s response to it.

Since the show came out early in lockdown, I’ve been inundated with questions from people asking me how much of the show is accurate compared to my own experiences and also, some surprise that I would choose to move away from my secular upbringing to one that is perceived as so different – and difficult – in that it is bound by so many rules and regulations. Here are my answers to the questions so many people have asked me about Unorthodox and my life.

How true is Unothodox’s portrayal to real life Judaism?

I’ve always been asked pointed questions by family, friends and strangers, but never more so since the show started trending in lockdown. I have been asked, ‘Why would you want to join a community that treats women in this way?’, but the way Etsy is treated is a far cry from my experience of Judaism which has given me huge unexpected joy and fulfilment. 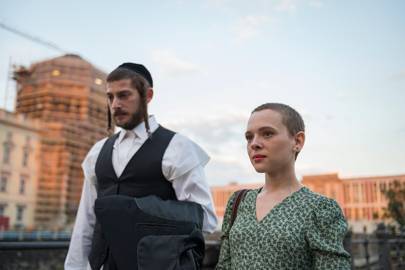 The truth is, the misogynistic treatment of Esty sadly takes place across all of society, not just the Satmars who are a very specific sect of the Jewish people with their own interpretation and application of Judaism.

Hungarian Satmar Jews who survived the Holocaust built a community upon unimaginable trauma and aimed to preserve their version of Judaism. They are a minority, and the Judaism depicted in the show, particularly its draconian treatment of women, is certainly not the religion that I have experienced first-hand.

How accurate are the beliefs surrounding the sex lives portrayed in Unorthodox?

Esty’s worth is portrayed as proportional to her ability to procreate and is told by her aunt, “You have no leverage in this marriage until there is a baby.” The show suggests that Orthodox Jewish women are given statuses only if they bear children. What it doesn’t show is that women and mothers are not simply valued, but revered whether they have children or not.

Huge emphasis is indeed placed on Orthodox Jewish family life, however, the Orthodox Jewish women I know, are confident in the standing in the eyes of their families and communities, my favourite example being ‘Ayeshet Chayil’ (Women of Valour), a song that is sung in honour of the woman of the house every Friday night.

The show briefly depicts the lighting of candles to usher in Shabbat (or the Sabbath). What it doesn’t show is that the men and children of the household then sing a song of gratitude to the woman of the house. The song is ‘Ayeshet Chayil’ in Hebrew, meaning ‘Women of Valour’. Single Orthodox Jewish men especially, sing fervently in hopes of finding their own woman of valour. One of my favourite lines in the song says, “Her husband praises her: ‘Many women have excelled, but you outshine them all!’” Orthodox Jews don’t just express this with a greeting card on Mother’s Day once a year, this is a weekly act. And yes, I am serenaded every Friday evening by my man. I get flowers too.

If feminism is about equality and choice for women, then I believe that Judaism gives women both

Judaism is widely misunderstood in its treatment of women because when it is properly looked at, it’s surprisingly one of the earliest champions of feminism. If feminism is about equality and choice for women, then I believe that Judaism gives women both.

The main belief of Judaism is that humans are created in the image of God (I know that ‘God’ can be a scary concept – that’s a conversation to have over a glass of wine). The highest goal for religious Jews is to live a life of loving kindness by observing the 613 commandments as outlined in the Hebrew Bible. Each gender has its own unique way to contribute towards this goal, and what women contribute according to their own criteria are valued in their own right. 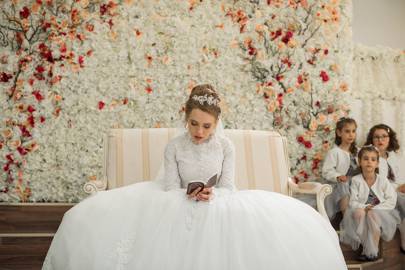 Personally, I’ve found this liberating. It frees me from being defined against the same criteria as men. I don’t feel I will be sacrificing my identity should I ever choose to be a homemaker or mother who may work in my own time in areas I’m passionate about, which are perhaps seen as less ‘impressive’ by secular eyes. My Orthodox Jewish community values me equally whichever path I choose – including being a working mother if I so wish.

Do Orthodox Jewish couples really have to sleep in separate beds?

The mortifying depiction of sexual relations in the show, where they are unable to consummate their marriage properly for months, not to mention the pressure for Etsy to fall pregnant and the intrusive manner in which Esty’s new mother-in-law casually drops off lubricant, makes for fantastic drama, but is unlikely.

Jewish law actually forbids sexual relations between a husband and wife when there is disharmony between them. This is why Etsy reminds Yanky, “The Law says that a husband should make sure his wife experiences pleasure.” Her husband will have been taught this as part if his Jewish studies and is expressly going against them by not considering Esty’s sexual needs.

The show further emphasises a frugal and cold marriage by showing separate beds for Esty and Yanky. Yes, most Orthodox Jews usually sleep in two single beds joined together – and they are pulled apart when the woman in menstruating. This is connected to laws around purity – simply put, husbands and wives stop all physical contact once a woman’s monthly period starts, resuming seven days after her bleeding stops – and this is not because periods are deemed dirty or impure. This time is for her personal introspection, and together with her husband, they work on their combined emotional and spiritual needs instead of physical ones.

During this time, a wife also halts usual domestic chores for her husband ensuring that he doesn’t take her usual generous kindness for granted. Yes, if you’re an Orthodox Jewish woman on your period, you are forbidden from doing certain ‘wifely’ chores. For instance, if you serve him food, you wouldn’t hand him the plate, and you wouldn’t pour water in a glass directly in front of him.

This is a time for a woman to retreat to focus on her own spiritual wellbeing – self-care, even. No physical contact results in a sexual tension that is designed to recreate the honeymoon experience every month when physical union resumes. And let’s be honest, being given an official ‘break’ from sexual relations, especially when you’re looking at a marriage to last a lifetime, is no bad thing.

In the show, viewers are shocked to watch Etsy shave off her hair on her wedding night and replace it with a wig. So is this the case in real life?

Well, yes and no. The hair shaving practice is a very ancient custom and most communities have moved away from it. But it is the norm for all Orthodox Jewish married women to cover their hair with a wig or a scarf as an expression of faith as well as a symbol of modesty, but I don’t know any who shaves their hair. The original practice was most likely due to “droit de seigneur” – a medieval law in Hungary allowing feudal lords to bed subordinate women before their weddings.

This custom was apparently so widespread that Hungarian rabbis required all brides to shave off their hair days before their wedding, to appear repellant to the feudal lords, stopping the brides from being sexually violated. Orthodox women only show their husband and their female family their real hair and wear either a scarf or wig when out in public.

Jewish sabbath rules: Why aren’t Orthodox Jews allowed to drive or turn on the lights on the sabbath?

From sunset on Friday to nightfall on Saturday, observant Jews ‘desist from all work’. In everyday language, there is no use of technology (no WhatsApp, Instagram or Netflix – let’s call it a digital detox; no cooking – yep, no scrambled eggs for brunch; no physical exertion; no spin class, no pressure to exercise and much more). So what do we do for 25 hours?

You know how lockdown has forced us all to slow down? How a digital detox is known to be good for our Instagram? I do this every week. In my case, for 25 hours a week, it is an opportunity to shut off from technology and authentically connect with my spiritual self and loved ones. We spend hours eating meals with friends and family, food pre-prepared the day before, kept warm on hot plates. We discuss portions of the Hebrew Bible.

Pre-pandemic, we attended services in synagogues and dined with other families. We enjoy walks. We evaluate the week gone by and have the chance to achieve that elusive mental clarity. Answers to problems I’ve been grappling with all week, effortlessly present themselves over the Sabbath. Shabbat is a sanctuary for me amidst the pressures of work and modern life.

For Orthodox Jews, religious observance is closely tied to family stability. By no fault of her own, did Esty’s dysfunctional family contribute to her situation?

Esty couldn’t find fulfilment from her interpretation of her religion and sought to define herself against secular ones – her self-determination takes courage and is to be applauded. The seemingly rigid ‘rules’ of Orthodox Judaism are often described as disabling, whereas I see them as enabling. Irrespective of religion, human society thrives on structure as it gives us stability and healthy barriers between the different elements of our daily lives.

The secular world may perceive freedom, a life without constraints, as the ultimate goal. This has not been the case for me. A boundless life is analogous to a violin – when the strings of a violin are not bound, they are free yet purposeless. It is only when the strings are bound that they make beautiful music. Now, when people ask me about how I could turn my back on the “free” old life I had before to take on this seemingly strange new life, I am proud to let them know that there is much good to be taken from an Orthodox Jewish lifestyle, whether Jewish or not.