It’s been a while since we’ve seen a comical advertising mishap now that (almost) every brand vigorously triple checks all content before releasing it out into the world, with great fears of being ‘cancelled.’

But there’s only so much you can do to prevent things and sometimes, mistakes happen. This time, it happened to involve Justin Bieber, who has found himself trending on Twitter for accidentally modelling Kim Kardashian’s loungewear brand, SKIMS.

The pop star has found himself in a bit of a pickle, as a building-sized billboard in West Hollywood featuring his Balenciaga campaign was hit by technical difficulties that ended in the bottom half of his body being meshed in with a separate campaign shot for SKIMS. Only thing is, the two adverts blended in together so well that people actually thought that it was an intentional campaign image.

What made it even more hilarious is what Justin was wearing. In the top half (which is from the actual Balenciaga shoot) he’s posing in a leather jacket. Meanwhile below the waist, we’re shown a pair of perfectly shaved long legs wearing a grey pair of SKISMS briefs. Naturally, it didn’t take long for Twitter to catch wind of the situation… 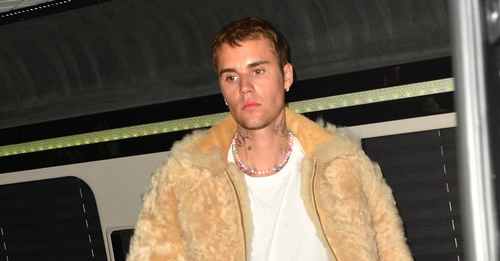 Like one Twitter user pointed out, it looks like the photos of the half-SKIMS-half-Balenciaga billboard were taken just as they were swapping one advert out for the other. However, it doesn’t make the idea of Justin Bieber wearing Kim K’s signature underwear any less funny.

Nor Kim or Justin have commented on the matter yet but considering the fact that they’re family friends – Justin’s wife Hailey Bieber and Kim’s sister Kendall Jenner are BFFs – could this inspire a real life collaboration between the two?

Now that we know that Justin can rock a pair of SKIMS, it would only seem fitting (pun, intended). We guess we’ll have to wait and see…

See What They Named Their Boy-Girl Twins