Next month (18 December 2019) is the 40th anniversary of the Convention on the Elimination of all Forms of Discrimination Against Women (CEDAW) – the international bill of rights for women, ratified by 189 states including the UK.

But while progress has been made, women continue to be victims of violence and unequal status, and recently, travelling to India and Afghanistan for Christian Aid, I saw the abuse and injustice with my own eyes.

Let’s face the facts. Gender inequality is a major cause of poverty and violence against women: it is estimated that 60% of chronically hungry people are women and girls, 603 million women live in countries where domestic violence is not outlawed, more than 2.6 billion live in countries where marital rape is not considered a crime, and one in three women globally experience gender-based violence within their lifetime.

In Afghanistan, I learnt, a woman can be imprisoned for being raped. 87% of Afghan women and girls experience abuse in their lifetimes. The murder of women (including honour killing) represents the second most prevalent form of violence against women in Afghanistan. Most murder and ‘honour killing’ cases involving women never reach prosecution. 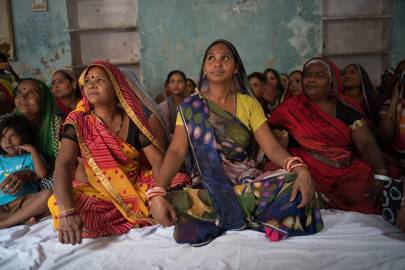 India has one of the highest rates of acid attacks in the world: Some 250 to 300 cases are legally reported annually, however the actual figure is estimated to be 1,000 cases a year. Every day 20 women die in India as a result of dowry harassment. 167 million Indians are “untouchable”, from the lowest, Dalit caste. Condemned by caste, there are around 1.2 million “manual scavengers”, in India despite it being outlawed, 95% of all manual scavengers are women.

What struck me in both India and Afghanistan was not only the extreme level of abuse and poverty but the startling lack of access to justice. In India I met Nisha, 39 years, who found her sister (aged 14 years) burned to death, when she was only 10 years old. She had been tied to a chair with a cloth in her mouth, covered in kerosene and burnt alive. She was murdered because her mother would not give her house as a dowry to her parents in law.

As Dalits they could not even report the crime to police, let alone get justice. Years later Nisha discovered Sakhi Kendra, an organisation which defends victims of gender and caste-based violence, rape and murder. They fight for gender equality and justice, and provide free legal representation, training and counselling for women who are victims of abuse. Nisha now leads a group of 300 women defenders. She has supported 500 women to get justice.

Geeta, 26 years, is a Dalit and single mother to 4-year-old daughter Priyanka. She works as a manual scavenger like her mother. Their job is to remove human excrement from latrines and sewers by hand. In return they are given a few rupees – usually no more than €27 a year. They endure side-effects like constant nausea and headaches, respiratory and skin diseases, vomiting and diarrhoea. Innately demeaning, the practice also reinforces the deeply ingrained Caste doctrine that Dalits are “untouchable”, or innately polluted from birth. With the help of Christian Aid partner, ARUN, she has applied for a government compensation grant. She hopes that she will be able to escape the fate of her mother and provide her daughter with an education and different future.

Ranjita started accompanying her mother as a manual scavenger aged 9 years. After decades of working as a manual scavenger, one day she decided she’d had enough. Thanks to ARUN, she learned about her rights and received help to train as a tailor and earn a dignified living. She now runs her own tailoring business – where, ironically, the people who used to insult her come to her to stitch their clothes – and can send her youngest daughter Sonyia, 8 years, to school.

Fatima, 35 years, is the mother of four children and a survivor of domestic abuse. Living in severe poverty with a lack of education and knowledge about her rights Fatima was threatened with having her children taken away and her 12-year-old daughter being forced into marriage. With the help of RAADA, she was given the opportunity to join the Women’s Silk Production Company. She now represents 750 women in the Company, she has custody of her children and supports her family.

Bibi Aisha, 25 years, mother of two children, was displaced due to the conflict and drought from Bala Morghab district of Badghis province. When they fled, they lost everything. She suffers severe poverty and has no man to support their life. She lives in an IDP camp with her children aged 7 8 years, with the support of Christian Aid partner RAADA.

Lala and Zahra present a radio programme in Herat, which educates about women’s rights issues. It is run by Christian Aid partner The Women Activities Social Services Association (Wassa). The Radio is more effective than social media in Afghanistan.

Zahra, 24 years, has been listening to the radio programme for 3 years and it has made her a women’s rights activist. ‘I studied law but I still didn’t know what was happening in my country. Before listening to Wassa’s Radio programme I had no idea about the plight of women in Afghanistan. ‘I am shut off. Women are cut off. Radio is the only way to find out there is nowhere else find out about these issues. I am disgusted by the violence against women. – I am an advocate for women’s rights and want to give women the opportunity to have their voices heard. I am well educated and privileged and yet I am shamed for pushing up my sleeves and showing my ankles or speaking to a man’ said Zahra.

There is no tool for development more effective than the empowerment of women. When women succeed nations are safer, more secure and prosperous. The next generation of empowered women leaders and changemakers will transform our world. Help us make this a reality. Please support Christian Aid’s Christmas Appeal

I’ve been in Coronavirus lockdown in Italy for 6 days, and this is what you need to know.

The ultimate guide to recycling your beauty products

This Chinese wellness trend, will undo all the damage you did, to your body in December