What do Rosie Huntington-Whiteley, Emily Blunt, Selena Gomez and Taylor Swift have in common? Aside from stellar careers, fantastic genetics and (probably) a live-in masseuse, the A-listers all share one secret: Simone De La Rue.

Simone is the secret weapon behind these stars’ honed bodies and wellness regimes. You may also recognise the personal trainer from Revenge Body with Khloe Kardashian.

Simone is the brains behind Body by Simone, the revolutionary exercise method that the stars swear by for staying in shape. It combines a unique and effective combination of dance routines, interval training and toning exercises, and has built Simone a following of some of the world’s biggest stars. 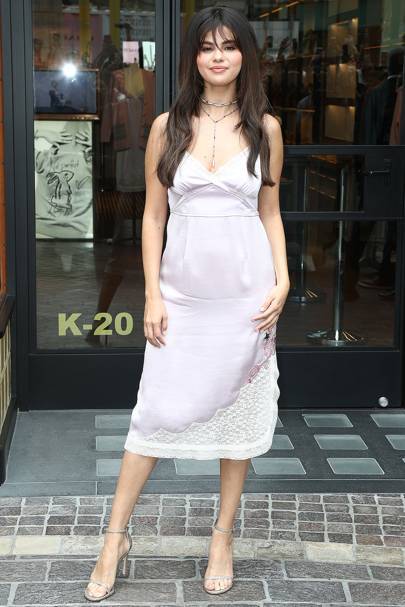 And now us Brits can get a Body by Simone as she opens shop here in London.

Simone has opened her first studio in the UK following monumental success in its LA and New York studios. Opening in Primrose Hill on 2nd February 2019, it’s sure to be packed to the rafters with famous faces and fitness fans alike.

Ahead of its launch, GLAMOUR was invited down to the expansive studio to give the class a test run – and we can attest that it’s fun, functional fitness at its finest.

Disclaimer: I’m not at all fit, I’m scared of working out in bright light and I can’t do a downward dog to save my life. However, I survived this class and actually enjoyed it.

Designed to safeguard against injuries while providing a dynamic workout, the ‘BBS method’ – as it’s known – is borne out of Simone’s impressive background; after training in classical ballet from just three years old, Simone undertook a highly successful dance career which spanned two decades and saw her perform on stages from Broadway to the West End. Think a mixture of aerobic style dancing, yoga moves and full body stretches using resistance bands.

With a blaring, feel-good soundtrack of Ariana Grande, Jason Derulo and an acoustic version of Spice Girls for the cool-down, this class is designed to make you look good and feel good.

Want to nab some of the endorphins for yourself? Body by Simone London launches on 2nd February 2019 at 86-88 Delancey Street, NW1 7SA. Say you’ll be there?

Read our round-up of all the fitness trends you need to know for 2019.