In August 2021, the Taliban took control of Kabul, leading the Afghan president to flee the country, and the Afghan government to collapse. It also left the Afghan people scared for their lives.

Every day I’m sent gruesome videos making the rounds via WhatsApp from family members in hiding in the capital city: women being whipped for no reason by a Taliban militant while crossing a busy road. Or Afghan soldiers being shot to death in broad daylight.

For weeks, I’ve been unable to sleep, as I find what is happening deeply disturbing. The Taliban may say they’ve changed, vowing to respect the rights of the people in the country, yet there is little evidence to back up their claims. Already women have been stripped of their jobs, their images removed from adverts, and I’ve heard terrifying stories of twelve-year-old girls being snatched from their homes.

Although it’s been 26 years since I was forced to flee Afghanistan, I can still recall how quickly my life changed after the Taliban rose to power in 1994. Suddenly, I was no longer allowed to leave the house unaccompanied and had to wear a burqa wherever I went. When my cousin was caught wearing nail varnish – spotted as she reached for an orange at a market – she was flogged right there on the street. 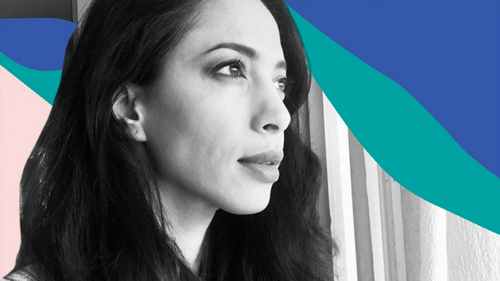 Under Taliban rule, death by stoning is common, and people are summoned by loudspeaker to gather at the sports stadium to watch. We lived in fear and oppression, especially women. Girls were forbidden to play sports or go to school. Instead, I swept the carpets at home and did laundry by hand. If we had guests, I’d make the tea. But I wasn’t allowed to be seen or heard. I’ll never forget the day my friend Jasmin came over and cracked a joke that made me laugh out loud –  my father whipped me as punishment.

All I remember about the night we fled Kabul is the blue tarp of the truck and the eight of us –  me, my father, stepmother, brother Salim, sister Mina, as well as her husband and their two babies – cowering beneath it. Two days later, we arrived in Mashhad, Iran, where we were put up in a room with a gas stove, one chair and four beds. It’s strange to think how excited I was at first.

My father had described the trip like a great adventure – we’d travel by train, bus and car, and see ten different countries to reach Germany, where I had a brother and cousin. I was 13 and watched over four weeks as he sold off our possessions to raise the almost £4,000 per person needed to pay the people smugglers. He’d promised us that we would be on our way to a better life.

From Iran our journey continued on to a mosque in Moscow. Rugs hung from the windows, plunging the cramped room into darkness, while the stench of urine and body odour permeated the air. We were held there with no shower and one clogged toilet for two weeks. Babies cried as refugees huddled together exchanging horrific tales of the journey from Afghanistan.

I was in a constant state of anxiety, sleeping in my three pairs of trousers because our smugglers had threatened to leave anyone behind who wasn’t ready to move at a second’s notice.

From there we were taken to Belarus, Ukraine and Hungary, mostly by car, but often by foot. I have snatches of vivid memory, like the night Russian soldiers forced the men in our group to take off their clothes and were searched for money while the women screamed. Luckily, my stepmother had hidden cash in a pocket she’d sewn into the crotch of her knickers.

On another night, somewhere in the Czech Republic, we waded knee-deep through a field of snow. We walked for hours until we came to a river where smugglers pulled us across, four at a time, using a tyre and ropes. My body shivered from the cold. None of us could swim, but my father was like a protective lion – a side of him I’d never seen before.

I knew we’d reached Germany when, from our hiding place in the back of a truck nearly seven months since leaving home, I could see the black, red and gold of the German flag fluttering off to the side of the road. “Look, beautiful Germany! We’re here!” I screamed, yanking off my headscarf. The driver left us at a petrol station in Bavaria where my cousin would meet us. Finally safe in his flat that night, I was the first to take a bath, turning the water black as I scrubbed away the grime

After applying for refugee status, we were given housing in Schwalbach am Taunus, near Frankfurt, before settling in a refugee community in Kassel, where we lived in a converted shipping container. It had two rooms – one for Mina’s family and one for us – sharing a bath and kitchen with other families. Salim and I attended school and I learnt German quickly, translating for my parents. Once a week, a social worker would stop by with sweets and clothes, praising me if I got a good mark in school.

I was completely mesmerised the first time I saw a female police officer – I couldn’t believe a woman could hold such a position. Unfortunately, my father wasn’t allowed to work, because of his refugee status. It was frustrating for him, and he’d often sit at home, bored. I washed dishes in a pub for pocket money and did our shopping at Aldi, overwhelmed by the choice, like the 20 different kinds of yoghurt with fruit.

When I was 16, I was browsing in an H&M when a woman came up to me and told me I could be a model. I was so surprised – I’d never considered myself to be beautiful. The woman turned out to be a former beauty queen and model scout. She suggested I should get my picture taken and accompanied me to her agency, where I was told I’d need a portfolio. But of course, when I asked my father, he said no.

In some ways it was as if I’d never left Afghanistan. I wasn’t allowed to go out with friends or use the internet, and my mobile was monitored to make sure I wasn’t talking to boys. When my older sister announced she’d found an Afghan man for me to marry, I knew I needed to find a way out. The thought of a forced marriage repulsed me – I packed my bags and fled to Stuttgart, where I had a friend, Björn, whose family agreed to let me stay.

Leaving home in the fog at 5am – and leaving my family behind – was harder than fleeing Afghanistan, but my desire to live freely was stronger than anything I’d ever felt.

Soon I was learning to swim, playing badminton and going to the cinema with friends, all the things I’d been forbidden to do. Growing in confidence, I found a photographer online to take my picture. He saw my potential and let me pay the £1,500 fee in instalments. On the day of the shoot, I took Björn with me for support. I barely recognised myself with my shiny hair and pink glossy lips. It was a new me and I couldn’t stop staring at the beautiful girl smiling back at me.\

The face of freedom

At 18, I was signed by an agency. I was sent to Milan, Rome, London and, in 2003, the furniture maker Bretz put me in their campaign. Soon I was living in Paris doing fashion editorials and posing for Joop, Airfield and Breitling, and earning more money than I ever thought possible. I had so many stories I wanted to tell my family, like the night I sat at the next table to Jay-Z and Beyoncé in a New York club. I’ll never forget being at the train station in Stuttgart and seeing my first advert in Vogue for Bogner. I couldn’t get over how far I’d come; freedom had never felt so good.

Still, I couldn’t shake the guilt, knowing I must have brought shame to my family and caused my father a great deal of pain. So, in 2004, a year after I’d left, I rang him, wanting to make peace. We met that afternoon and cried as we held each other. I told him how sorry I was, and he realised that times have changed. He accepted my life as a single woman in Berlin who goes out dancing and laughs – wildly.

At the beginning of my career, my agent would sometimes ask me to say I was Brazilian, thinking I might scare off clients if they knew where I was from. But I refused. I’m proud of my Afghan heritage. Yet today, when I re-watch the videos on my phone, and see the refugees arriving in Europe and North America, I am heartbroken. I feel their pain. It will take time to put the trauma they’ve experienced behind them.

On television I’ve seen footage of a new generation of women taking to the streets in Kabul, despite protests having been banned, calling for the right to work and hold political positions. Although they are being beaten and attacked with tear gas as a result, they continue to march, refusing to recognise the Taliban as a legitimate government. It is their courage that gives me hope.

However, as hard it is for me to admit, I don’t see a future right now for the Afghan people in Afghanistan. If they want to survive and thrive, they have no other choice but to flee their home country. Thus it is up to us, with the help of humanitarian projects worldwide, to get them out safely, and as soon as possible, so that they can rebuild their lives with the resources they need. Sadly, it is their only chance.