My teeth did a good job of remaining intact for years, but they couldn’t bear the assault on them after I adopted my beagle/pointer, Monty, and in the two years since getting him and duly clamping down whenever he did something absurdly cute (every two minutes, on average), they’d seriously eroded.

My dog ruined my teeth.

I know that sounds like the kind of lie you might tell at school, but in this case, it is absolutely true – and I’m not alone; my (admittedly eccentric) family all thrust our lower jaws slightly forward and clench our teeth when presented with something especially cute, with babies, puppies, and especially twinkly-eyed men who seem guileless all causing us to grind our teeth together in a slightly demented fashion.

I also had developed the habit of grinding whenever facing a deadline or especially stressed, finding that I would wake in the night with my teeth glued together and a sore jaw. 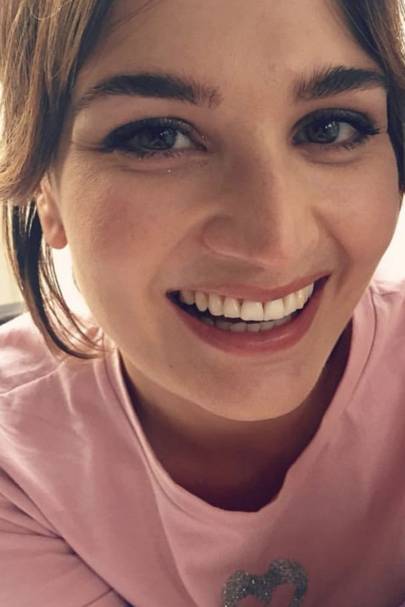 The end result was teeth that were ragged at the ends and made me feel slightly self-conscious when I smiled.

I booked into a few places to discuss them and found I was often oversold, with one dentist recommending veneers on my front six teeth to the tune of £4k and the loss of the majority of said teeth to accommodate them, which to me felt like going a bit far – my teeth were basically OK, just a bit jagged.

After some extensive googling, I decided to go and see Dr. Uchenna Okoye at London Smiling, who’s renowned for her knowledge on making little adjustments to teeth that make a big difference – and has the celebrity clientele to prove it (though she’s annoyingly discrete, those who’ve raved about her on Instagram include Millie Mackintosh and Myleene Klass). Her view tallied up with mine: ‘the less dentistry, the better – if I can align, whiten and bond, that’s better.’

I’ve always had slightly uneven teeth, but in our consultation, Uchenna and I agreed that while Invisalign might be an option in the future, making other less costly and time-consuming ‘tweakments’ might be enough to tidy up my teeth enough for me to feel more comfortable smiling.

The first step was whitening; once the colour of the bonding material has been matched to teeth, it can’t be changed, so it’s a good idea to be happy with the colour of your teeth when you have it done.

Celebrity Teeth: Before and After

As I’ve always been pretty good at seeing a hygienist regularly to keep plaque at bay, I just had a quick check up with my dentist to make sure everything was okay before whitening my teeth with Crest 3D Luxe Professional Effects Whitestrips at home. The colour to go for? ‘Something sustainable,’ says Uchenna, ‘you don’t want to have to whiten every three months. The most natural colour will match the whites of your eyes, and remember afterwards that anything that would stain a white shirt will stain your teeth.’

The process of whitening with the strips couldn’t be easier – after brushing, you literally pop them onto dry teeth, wait for them to do their thing, then brush again. I found my teeth were quite sensitive after use, so left a few days between using strips. Three sessions were enough to lift yellowness.

Next: bonding. This is thankfully a pain-free and speedy process – after Uchenna had taken some photos of my teeth and matched the colour, my teeth were slightly filed to smooth the edges, glue applied, then the bonds moulded onto my teeth. In total, bonding my front four teeth took 40 minutes, and you can eat/brush/do whatever you normally do with your teeth directly afterwards as the glue is ‘cured’ by a light as soon as the bonds are in place.

Uchenna warned that it might feel like I had stones glued to my teeth and though the sensation of them involved some adjusting to, I actually found the appearance took longer to get used to. As I’d ground down approximately 2mm, the addition of the lost teeth looked long to me. At first, I was worried I looked like Matt Dillon in the scene in There’s Something About Mary where he gets those huge teeth put on, and started to smile with my mouth shut – which was really the opposite of the intended effect.

The best teeth whitening kits, and everything celebrity dentists know about getting pearly whites

After a week or so, I started to smile normally again – and the compliments came flooding in from new acquaintances and friends alike, who mostly said that I had a nice smile rather than anything tooth-specific that might’ve made me feel they were really trying to point out that mine looked like they’d been done, which is absolutely not what I was going for. Crucially, nobody I am close to noticed unprompted that I had done anything to my teeth.

Now, I love them – they look clean and neat without tipping into the territory of looking fake. Most importantly of all, I now don’t think twice before smiling – though I might have to reconsider my response to Monty being cute.

Bonding: This is the process whereby lost enamel is replaced with composite or resin, and it can be done on all teeth.

Whitening: In the UK, you have to see a dentist before you can get your hands on the Crest or Oral B strips, but they’re the most effective at lifting discolouration.

Straightening: Uchenna recommends either Invisalign or Incognito as they are both extremely precise. Note that teeth always move and crowd as time progresses, so it’s a good idea to wear a mouth. Guard nightly.

Hairline Fractures: Whitening can get rid of these, but the crack isn’t necessarily a problem to the health of teeth. The best way to handle this one is to see a dentist who can look at yours to decide on a treatment plan.

Fillings: If you have silver filings, these can be switched for white ones to make your teeth more uniformly white. Uchenna recommends starting on bottom teeth as the shade of fillings there is more obvious.

Tooth contouring is the hot new way to get pearly whites. Here’s what happened when we tried it…