Shortly after my husband and I got married, we did what so many couples do before they’re ready for babies: we got a dog. We had gone “just to look” and fell in love with the shy, scrappy looking Pomeranian with the beady eyes.

He was a year old and on sale, so we decided that his name was Jasper and he was going to be our baby. Jasper was an “only child” for six years. That was six years of sleeping on our bed, puppy play dates, long walks, and birthday celebrations; six years of our undivided attention and affection that he didn’t have to share. Then she came along.

Like any responsible dog owner, I read up on what to do before introducing your dog to your new baby. Then, like the crazy dog mom that I was, I took it 10 steps further. I spent months preparing Jasper for his new role as a big brother. I talked to him about it, included him in our pregnancy announcement, and got him used to walking next to a stroller (I told you I was crazy!).

When we brought Jessica home from the hospital, I made it a point to keep his routine as normal as possible. Everything was great at first, but then he realized she was sticking around, and our house suddenly reeked of resentment. My perfect gentleman had become a defiant brat. 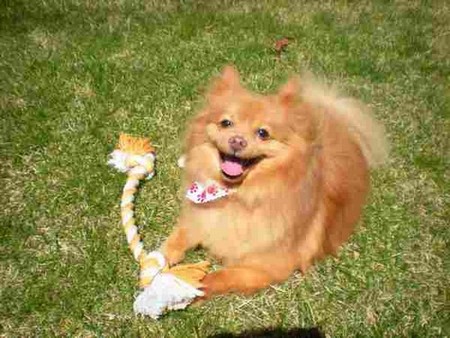 When our twins entered the mix, I’m almost positive I heard a, “F*ck you, Mom,” in one of his grumpy old man grumbles.

At first, I was the only one at the receiving end of his resentment. These days, when he hops up on the couch when we’re watching TV, instead of curling up in my lap like he used to, he makes a show of walking all the way to the other end (side-eyeing me the entire way) before plopping down with his back to me. Or, instead of coming when I call him, he just shoots me a dirty look before turning and walking away. I’m pretty sure he’s flipping me off in whatever way dogs do that. For the most part, Jasper avoids our soon-to-be-4-year-old, but he has his days where he feels the need to let everyone know exactly where she stands.

Jasper is 10 years old, but he’ll still play fetch for hours – at least, he will if I’m the one throwing his toy. The minute Jessica decides she wants to play, the game is over. She can throw his toy all day, and he won’t even look in the direction in which she’s throwing. Instead, he’ll turn with a huff and sit by the door until someone lets him inside. Other days, when he’s feeling especially salty, he’ll steal her seat the minute she gets up and will not move. When she comes back, it’s as though he knows she’s not allowed to move him and he’ll just sit there and give her a smug look that says, “Yeah, I’m in your seat, and there’s not a damn thing you can do about it.”

We’ve tried to get them to be friends. One of Jessica’s chores was to feed Jasper in hopes that if he associated her with food, then he’d want to be her friend. But my dog decided that he’d rather go on a hunger strike than accept anything from her. I’ve tried to let her hold the leash on our walks, again hoping that he would associate her with something fun, but it turns out that he’d prefer to just skip the walk altogether.

Our twins entered the mix just over three months ago, and I’m almost positive I heard a, “F*ck you, Mom,” in one of his grumpy old man grumbles when we brought them home. I’ve given up hope of ever getting one of those sweet pictures of my dog and my children all sitting happily together and smiling like they love each other, because, well, they don’t. I’ve accepted the fact that they probably never will, and that old adage “you can’t teach an old dog new tricks” just happens to be true.

My Husband Will Just Have to Deal With This “F*cking Terrifying” Mask, Because It Works