Dating is all about trying to find common ground with strangers and these dating sites give you a little helping nudge straight-off-the-bat. To mark the launch of our AW19 print magazine, starring Victoria Beckham, going on sale, and so you don’t have to get your green-fingers dirty, I tried three of the most popular veggie and vegan dating sites.

And, the results were interesting.

It’s no secret that most millennials and Gen-Zs today are on a quest to live sustainably and are consciously making more eco-friendly choices. Naturally, this has started to extend into our sex lives. 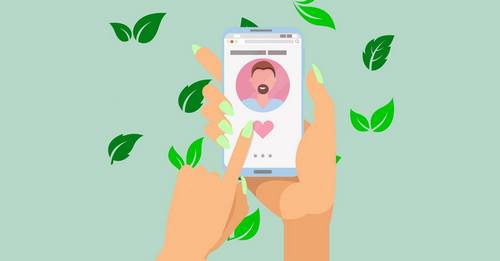 Tired of Tinder? Bored of Bumble? Hating on Hinge? Well, this new wave of herbivore-friendly dating apps could solve your problems. Or not.

Named, I can only assume, because vegans graze on grass like cows?!? Grazer is aimed at a younger audience than the likes of GreenSingles, with a (very, very Beta) format that mimics that of Tinder. In my East London area, unsurprisingly, there were a fair few people to match with. However, 15 out of the 20 profiles I swiped on had either one of the following: no photo, a photo but of a cute animal rather than themselves, or a bio that said something along the lines of “don’t eat meat” like that isn’t the APP’s very premise.

All in all, a bit of a fail because I only swiped right on one person and then immediately unmatched them once their opener was “I want to paint you green and spank you like a disobedient avocado”. If I wanted that kind of chat, I’d have stuck to Tinder.

Couldn’t get past the fact the website looks like it hasn’t been updated since 2001. Also, from the promo shots, I’m not sure there’s anyone on this site in my age bracket.

Their app, at least, feels like it has entered the last decade. However, the continuous pop-up ads whilst you swipe is very distracting. That being said, I did match with one person I fancied, but after about 5 minutes it became clear their photos were definitely not them. Turns out, just because someone’s vegan doesn’t mean they automatically have morals.

All in all, eco-dating was a complete fail, for me. I think it further instills an ‘us’ and ‘them’ mentality. 5 years ago, most men I knew said they would never date a vegan. Nowadays, you’re more likely to meet vegans who won’t date non-vegans; the paradigm has shifted. Once a choice that was undesirable and, in less metropolitan cities, unheard of, it’s now applauded and *generally* seen as a worthy cause.

The necessity to take climate change seriously is growing and growing, with predictions that the earth only has 12 years left – so, I’d hope, that we can stick to the more popular APPs and still find like-minded individuals. Environmentally conscious people aren’t a small ‘hippy’ minority anymore, and thus, we shouldn’t be relegated to beta-dating apps.

Riviera has been confirmed for a third season