Bexy Cameron, 38, was born into the strict ‘Children of God’ sect, notorious for sexual exploitation and child abuse. Along with her 11 brothers and sisters, her childhood was spent all over the world, constantly on the run from authorities and the media. She was regularly subject to physical and psychological abuse, exorcisms and even a one-year enforced ‘silence retreat’ at the age of 10 – a punishment for sending a note to her younger brother.

Founded in California in 1968 by the self-proclaimed prophet, David Berg, at its height Children of God had over 10,000 followers. Some women in the cult were sent out into communities as the ‘whores of Jesus’ to practice ‘flirty fishing’ enticing men to join the community through sex. Sometimes daughters were forced to ‘marry’ their fathers.

By the time Berg died in 1994, he was wanted for questioning by the FBI and Interpol over allegations of incarceration, kidnapping, rape and incest. An iteration of the group still exists today and is currently known as ‘The Family International’ and while all her siblings have now left, her parents are still members.

When Bexy was 11, a Guardian journalist named Walter Schwarz came to investigate the group and interview her family. He asked her the most simple of questions: ‘What do you want to be when you grow up?’. Until then, Bexy had believed that she would die by the age of 14 when Armegeddon came and she and her fellow cult members would have to fight, using lasers from their eyes, in the ‘end of days’ war. She had never contemplated that she could have a future, but Walter changed her perspective and gave her hope.

Four years later, aged 15, Bexy escaped after working secret night shifts in a local bar in Leicester and went on to have a successful career as a creative director.

Now, Bexy has written a book about her childhood. Cult Following: My Escape and Return to the Children of God jumps between chapters about her childhood and also as an adult when she journeyed across America making a documentary investigating different religious cults in an attempt to understand their powerful allure and dangerous practices. So powerful, beautiful and exceptionally written is her story, that Dakota Johnson and Riley Keough have bought the rights to adapt it to a TV series. Here, in an exclusive piece written for GLAMOUR, Bexy tells her remarkable story… 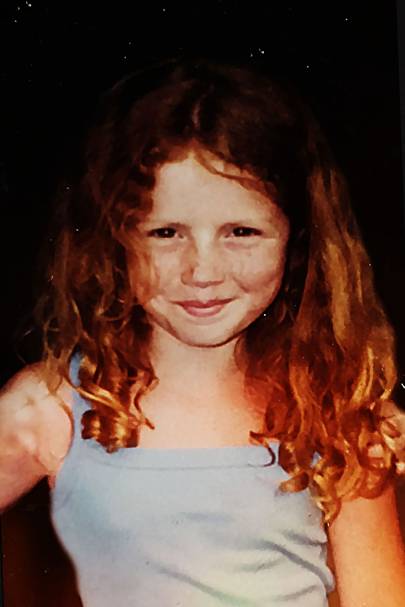 “Lord give us the power to cast the demon out of this child”.

My face is pressed into the carpet, its rough texture stinks of sour milk. Worn threads dig into my forehead. My small frame collapsed inwards on itself. Hands are all over my body – the whole commune gathered for my exorcism. People shout in tongues, I am imprisoned in a tunnel of noise, hands and heat. Everything shakes. Is that my demon rising out of me? My hands burn. My arms tingle. My ribs shrink towards each other, forcing out the air in my lungs. I can’t breathe.

I woke up fighting for breath, drenched in sweat, back in my flat in London. I grappled with the window to gulp the cool night-air of Bethnal Green. Slowly, I calm my breathing down, rubbing my arms and legs, reassuring myself that I am in this reality. Not a nine-year-old girl in a demonic nightmare. My eyes could just about make out the messy piles of clothes on the floor, the remnants of a pot noodle by the side of my bed, the clock beaming out 3:00 am. I was in my room; not the slightest bit dreamlike.

At 27 years-old I would have nightmares almost every night; as my eyelids would close, the dark theatre curtains would open to that night’s vivid show; watching my brother publicly beaten until he bled. Of running endlessly, training to fight as a soldier in the wars of the Armageddon. The ‘one’ where I was mute, my voice taken from me for over a year at an enforced ‘silent retreat’. In these dreams, I could taste the mud of the fields, I could hear the sting of the belt, and felt the silent tongue stuck to the roof of my mouth.

Yet the visions that invaded my sleep weren’t dreams, they were memories of my childhood. The residue of my life before, which had no respect for time, my newly crafted identity, or the space I put between ‘then’ and now.

Where did I come from? The Children of God – you may know them as a “sex cult,” branded with this label when the media discovered the group was using the mothers as “whores for Jesus” with a predatory leader who condoned ‘sex’ with children. You may know them as an Armageddonist group who believed that the end of the world was coming, or you may not have heard of them at all. But this group, that was the home to these very real memories, was my entire world until I was 15 years old.

By this point, at 27 years old, I had a job as a creative director; drinking hard, working harder, doing everything I could to pretend that the world I grew up in was someone else’s reality. But dreams and night terrors can provide a kind of virtual reality simulation for us, where we rehearse threatening situations, as a way of protecting us. So, 12 years after escaping The Children of God, my brain was still preparing me for the threats I grew up with. Using the dead of night to rehearse, never allowing me to let my guard down. I was now psychically and physically safe, but my psyche continued to tell me I wasn’t. And even stranger, there is a part of ‘dreamstate’ that can make memories stronger over time. These scenes were becoming sharper, the smells stronger, the faces less blurred, every time I closed my eyes. The little girl version of me was stuck in that reality, and I needed to save her.

And to do this, I had to face the past, and with that came the need (more than ‘the want’) to explore the world of religious cults. To try and understand why people join groups, and underneath it all; why my parents chose to raise me and my 11 brothers and sisters in a dangerous religious cult.

I bought a ticket to America, it being the heartland and birthplace of so many cults. And so started the mad, dangerous, exciting (and sometimes hilarious) road trip, where I spent a total of four years joining ten new religious movements. The journey felt like a cross between Thelma & Louise (I went with my filmmaker girlfriend and all-round badass Sofi) and Wild Wild Country. I picked kale with Armageddonist groups that reminded me of my own, who are also raising their children to be the brides of Christ. I took part in rituals with groups that raise their children with mindfulness and the ‘universe’ as part of their curriculum. And I met (to no one’s surprise) leaders who think they can heal you with their penis. I wanted to know if kids were still being treated the way I was. Because while adults have the right to believe whatever they want to, it’s so often the children that are the unwilling passengers within religious groups. While the parents might have experienced “enlightenment”, for the kids that can translate to imprisonment.

And all the while on this journey, my dreams or ‘night-memories’ followed me. And gradually, I began to unpack the realities of them; the exorcism I had as a nine year old, the 11 months that I spent on Silence Restriction at 10-years-old (forbidden to talk to anyone except an assigned leader), the “Victor Camps” that they filled with rebellious teenagers who were subjected to public beatings, isolation, humiliations and army style training. And perhaps the most damaging memories of all, navigating a group rife with child pornography and sexual deviants.

This trip around America was the beginning of my process to unpick not only my own history, but the underbelly of the world of religious groups. What is at the heart of why people join? Is it the human need that we all have for finding our purpose and our people? That sense of belonging. What happens when seemingly ‘pure’ ideologies go wrong? And most importantly, the safeguarding of children’s human rights whatever their religion. Were these groups treating their children with compassion? Or were they raising them as a ‘tool’ for their beliefs? Or as martyrs, like I was.

And after crossing thousands of miles, and decades of time, I realised to get that child (me) out of the loop of trauma,I had to go back to the source, and face something I was perhaps more scared of than any cult I infiltrated on my journey across the States: my parents.

How I ended up confronting my parents is captured in the last chapter of my book, and really was the most necessary piece of my process. Even after all the miles on the road, and groups I had joined, the cult leaders I had questioned, this was the confrontation that I was most afraid of. And I know I am not alone in this, so many of us, whether we grew up in a cult or not, can trace our pain back to the people who raised us. But I had to give that 10-year-old little girl who had her voice stolen from a chance to speak her truth. And while it was terrifying it was also an act of self love. While it didn’t take away the trauma, there was a huge shift towards handing me the power over my past.

It has been 10 years since the night I wrestled for air in Bethnal Green, and my brain no longer uses the darkness to process the past. And that wild journey through cults which led to my healing is something I will hold in my heart forever. The loop is broken, and the peace and closure I experience is real. Now that is something this cult-kid could have never, ever dreamed of.

Sarah Jessica Parker has given us an update on when the Sex and the City reboot will be released!