The Apple TV+ drama centres around a Me-too scandal hitting American’s number one breakfast news show but the far-removed setting of a TV show turns a mirror on our own society, picking up on themes of ageism, sexism and work-place bullying. The results?

The best show on television RN with one of the best performances from Jennifer Aniston, ever and Reese Witherspoon – who also produced the project – at the height of their powers.

Reese Witherspoon and Jennifer Aniston are a touch delirious with jet lag but on phenomenal form as they sashay into the Claridge’s suite for their GLAMOUR interview to launch The Morning Show – their first acting role together since they played the Green sisters in Friends decades ago.

Jet lag aside and in an hilarious and candid mood, here Jennifer discusses how everyone feeling like they know her has left her ‘isolating’ herself, Reese discusses overcoming rejection and how the Me-too movement changed their lives after they found, “the culture that we grew up in is broken and doesn’t allow space for women to be leaders.” Let’s hear it for Jen and Reese – true flag bearers of empowerment… 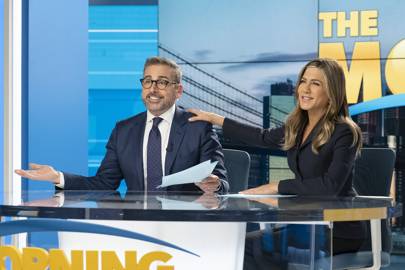 Everyone feels like they know the anchors in The Morning Show which is just how many people feel about you two. But behind closed doors they are going through some very dramatic things, how have you dealt with that in your own lives?

Jen: I find myself at times isolating a little bit more, staying in – I love being home. Home is a very comfortable, safe space for me. But if you stay home for too long you will become isolated and lose touch with what’s going on in the real world. So that’s something I related to Alex on as she done that. She has sort of lost touch in a way and is trying to just survive what’s going on with her personally, her child, her relativity, you know what I mean? And relevance and just staying there. 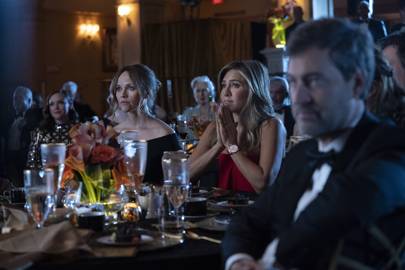 Jen: Yeah, I definitely had a hard time getting a job. I was a waitress forever. But then it’s been pretty smooth in terms of that though.

Jen: But look what you’ve done!

Jen: Of course, it is, but what there’s no gain without that pain.

Reese: And vulnerability and willing to be wrong, and people turned me down. It’s hard. 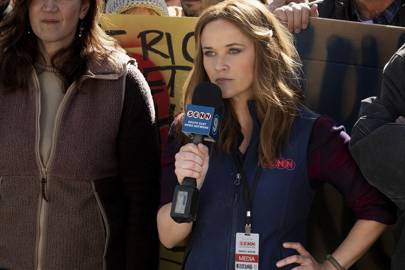 What did you learn from that rejection?

Reese: Well if you don’t continue to put yourself out there, if your ego is bigger than your will. And you’re going to limit your experiences. So, it was very humbling to me, but I thought, if I don’t try it, I’ll always regret that I didn’t try and really own my own company. I didn’t want to be owned by other people and it’s been really great.

Reese: Yeah, create my own culture, right? Because the culture that we grew up in is broken and doesn’t allow space for women to be leaders.

It is such an amazing narrative to have these strong, powerful women. But every woman is powerful in their own right and constantly in interviews you are asked questions as if that isn’t the norm. How do you feel about that?

Jennifer: I think it’s interesting that that’s the thought that people have. You know, that it’s not the norm that women are strong and powerful. We’re all powerful human beings! 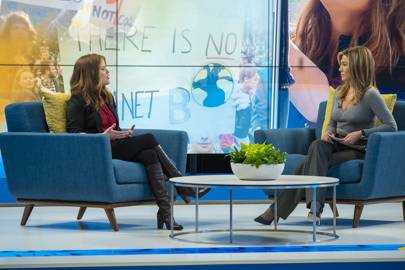 The Morning Show is about your characters taking control of their own narrative – how has that been for you, in your own lives?

Jennifer: I think it’s – honestly – it’s finding my voice. I think it’s also realising that I have to find and source out my own material because the scripts aren’t written for the stories that I wanted to tell. I think Reese wanted to tell, obviously. That was something that kind of dawned on me actually 10 years ago or more than that, that we’ve got to kind of take care of this ourselves because there’s nothing out there that feels inspiring or exciting. And it takes a long time. It wasn’t until recently that it wasn’t deemed, just, ‘oh isn’t that sweet, you’re producing!’

Reese: Well, I’m enormously grateful for the women who have spoken up and told their stories of assault or abuse or how negative their work environments are, because in a lot of instances they had nothing to gain. And really culture changed because those people banded together and spoke out, and sometimes just spoke out as individuals. But that revelation really changed history I think.

How did that outpouring of Me-Too make you personally feel?

Reese: I mean, I had all sorts of feelings. I was sad.

Jen: I was sad. I was mortified.

Jen: I was trying to play catch up as to wait what’s happening and who, is this too aggressive? You know it was like loud. Really. Remember how loud it was?

Jen: And the men were getting just like booed and hissed all of a sudden, and it didn’t matter what man, any man that had an accusation.

It’s so similar to the first episode of The Morning Show, when the characters are waking up to a new world, did you feel like it was an aftermath?

Jen: That’s exactly how we wanted the tone of the show to be, which was, it’s just happened and how do we handle this? What do we do? What’s the correction for the mistake?

Reese: There’s no plan and it’s a new world order.

Jen: Yes. It’s a new normal and we’ve got to read the playbook and figure out what the new rules are.