You know what, I am a homeschool kid, so I’m so used to being in my house on my laptop, but with my parents. So I’ve kind of been preparing for this moment for a while and I feel very fortunate to be able to say that I’m in a really good place.

My screen time on my phone is just horrendous. It’s awful the amount of time that I spend on there, but I have been pretty productive. I am catching up on schoolwork, and I challenged myself before the quarantine started to write a song every day of the quarantine, and I haven’t missed a day yet.

They’re not always great, but I think that’s a fun, creative challenge that I’ve been doing.

Do you think we need High School Musical more than ever right now?

100% yes! High School Musical is just such a fun project, it’s so fun to work on and it’s so fun to watch just as a viewer. I think that the stories we tell are so important, and I think the visibility that we shed on people of colour and the LGBTQ+ community is amazing and so overdue. 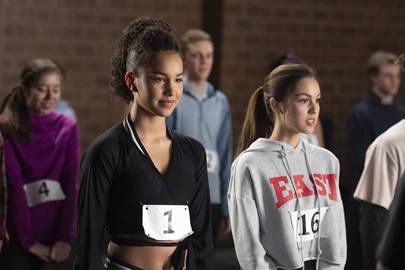 At the end of the day, it’s just really a story about kids and camaraderie and a love for theatre. And I think that there’s nothing better than that. It makes me happy just thinking about it.

What do you think that this filming experience of this show has taught you about the power of community and camaraderie?

Oh my gosh, absolutely everything! We filmed in Salt Lake city, Utah, which is definitely out of the way of the LA, New York and world that I’m so used to. It kind of feels like summer camp, like all of my best friends are now in Utah, we have game nights and movie nights, and we all go out to restaurants. I always say that I never had a normal high school experience. I’ve always been homeschooled because I’ve been working. 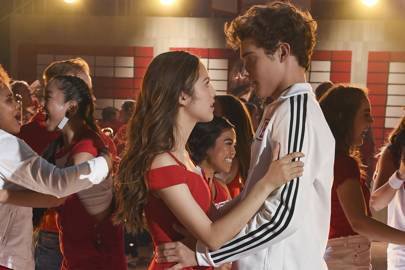 So this is kind of like my high school experience, and these are my high school best friends. It’s an experience that I’m going to remember forever. Something that’s really special about the show is the support that we all have for each other. We all just want each other to succeed more than anything, which is sometimes hard to find an industry that’s so plagued by competition and jealousy, but there’s none of that on our set. It’s just all love.

What has that in turn taught you about yourself?

Oh my gosh. So much! I learned so much from all of my cast mates on a creative level, especially just being with them and seeing their hard work and dedication, it inspires me to work hard with the things that I love. And their kindness is also just so important. I think that I’ve learned how to be a kinder person on the set, be more considerate and thoughtful of others. I definitely learned a lot about being a better member of a team, too, because we’re all just a big family.

What kinds of conversations do you want to start from being in this show?

I think the stories we are telling like addressing LGBTQ visibility and putting women of colour in the spotlight is just so important. I think that’s one of the great things about doing High School Musical in 2020. I think the most important thing for me is I hope that this show makes people feel seen.

I think theatre already is such a place where outcasts or people who don’t think that they fit in can find a home, and I hope that our show is an extension of that feeling of belonging.

When you were growing up, did you ever feel like an outsider?

Oh my gosh, always. To this day, I still feel like an outsider and I think that’s just part of human nature and part of growing up. It’s hard to find your footing in the world. I think that’s something that Nini, my character, definitely experienced a lot in this series. That was really a fun challenge to portray that, because that was definitely something that I was going through at the time. Yeah, but I think that did a really good job of writing that and portraying that.

Who do you think has taught you the most on set?

Wow. These are some good questions! I think I learned so much from Sofia Wiley who plays Gina. She is one of the most caring, compassionate people I know and something that she’s really good at doing is setting boundaries with people. I think that I hadn’t learned how to do that in my life yet and I think one of the reasons she so loving is because she’s loving to herself first, she knows what she wants, where she wants to be, how to protect herself when stuff is stressful, and not always super positive all the time.

How did you transfer that into your life?

I think growing up, I always had this idea that more is better, like more friends, more people in your life, going out, more experiences. But I think keeping your circle small is so important, and just talking to people who you really love and trust has so much value.

I don’t think there’s any need to spread yourself too thin. I thought that by doing that, I would make myself more popular and more attractive, but I don’t think that’s true at all. I think you have to look inward and start there and really surround yourself with the things that you want to be surrounded with, because that just affects you as a person so much.

The idea of popularity is such a charged conversation, isn’t it as well? How has your relationship with popularity changed?

Oh my gosh, 100%. I think I’m still struggling with that as a 17 year old girl, and trying to find my footing in the world. But I think especially being on the show, it really feels like such a family, and I think that all of the people on the cast are so loyal to each other, and I think that’s so important.

I think I’ve learned a whole lot about fostering deep, trusted relationships over having surface-level friendships, and I think that’s so important.

I remember Joshua, who plays Richie, told me this, “You are your five closest friends,” and I think that’s so true, because if you surround yourself with is just such an indicator of who you are as a person, you just absorb the energies that they’re giving off.

What is the fondest memory you’re taking away from this filming experience?

I think one of my favourite memories, it was when we were filming Born to be Brave with just this magnificent dance number and it was a night shoot, and we’re on location. Doing a night shoot on location is always so fun. It feels really exciting.

A bunch of people came to watch, and it was their off day, but they just came to watch to support us, which is just speaks to the character of the people that are on our show.

We wrapped up midnight and after that, we all went to get pancakes at 2:00 AM and we just ran around in the parking lot, just like total teenagers, just living our best lives. This experience is just something that I wouldn’t trade for the world. Some of my best memories and closest friendships are because of this show.