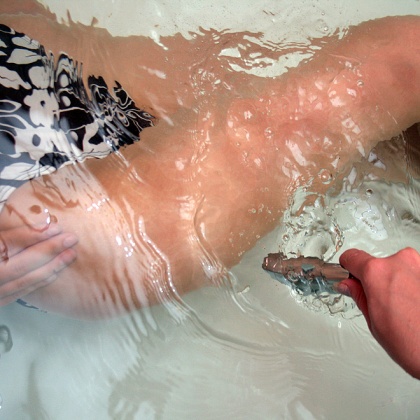 Hand hydro-massage in the city is done in two places – in the “Medical Club” and in the health center “Solnechny” on Linnaya Street. Still it can be found in some saunas, but there the massage is included in the bath process, and washing and soaring did not interest us. For “medical club” for technical reasons, the whirlpool was temporarily canceled. In the “Sunny”, despite the busy schedule of those wishing to undergo the procedure, it was 30 minutes since the morning, and it was there that the SHE correspondent left.

The whirlpool bath was used in the 1930s in Germany – it was noticed that patients who were regularly immersed in bubbling water with severe injuries quickly recovered. At the same time, a less expensive, but more effective type of underwater massage – manual was also used.

The masseur holds a hose with a head of water in 1-5 atmospheres and gradually influences the patient’s body. And the force of influence due to the temperature and pressure of water is even greater than with manual (manual) massage.

The hydromassage has certain indications: injuries, swelling, tired legs syndrome – it promotes rapid resorption of hemorrhages and speeds up recovery processes; stress and chronic fatigue – it acts soothingly and normalizes the work of the nervous system; excess fat tissue, bowel dysfunction – by optimizing the metabolism and activating the circulatory process, helps to reduce the volume. There are contraindications: acute skin infections, thrombophlebitis, heart attack, hypertension, oncology. But, apparently, people with these ailments do not go swimming with a hose, because they did not ask me if I was ill with anything of the above, and immediately, hastily – the patients go on each other’s heels every half hour – they sent me undress.

Do the procedure in a deep bath with jets. If you do not hesitate, you can take it naked, if it’s embarrassing – in a swimsuit, it’s better to separate, which, unfortunately, I found out only in the process, when the masseur said that manipulation of the tissue is useless. At first the jet was tuned to the force of 3 atmospheres, but it seemed rather weak to me, and I asked 4.

I will say directly – the sensations are strong and even painful, especially on the hips, but you feel how your muscles are being worked out the more sharply. 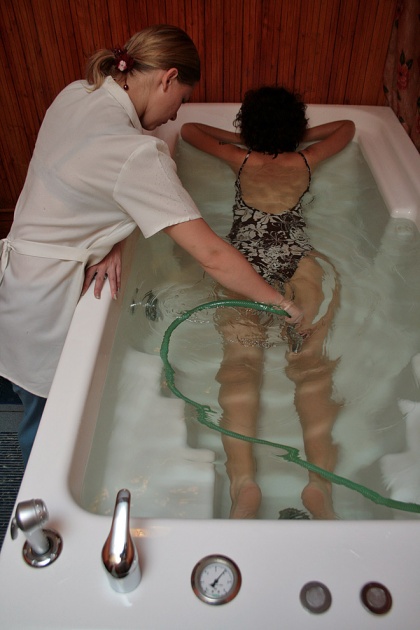 First the patient lies on his back, and the jet hits the front of his legs, arms, stomach. Then you bend your legs in your lap, and the masseur tries over your hips. Then you need to lie on your stomach and, if you can tolerate, put under the stream the heels, and then – the buttocks. Then, lying on your back and leaning on your elbows, letting the water jet work over the muscles of the back and shoulders. Some parts of the body almost do not feel the impact, others perceive it painfully, some grateful. For example, calves of feet, often swelling in hot time, as if asked for this kneading and during the day after the procedure, the weight in the legs did not arise.

As for the effect of losing weight, then, as the masseur said, weight can not change – which, for example, happened to me. But with the passage of the course, body volumes decrease.

Hydromassage very well tones up and tightens the skin – they well put themselves in order after childbirth or slimming, it helps to destroy fat tissue and increase lymph flow, and therefore, the removal of excess fluid from the tissues.

If you did not take a towel, then, paying 25 rubles, you can use the local. One-time procedure of hydro massage costs 420 rubles in the Sunny (500 rubles in the Medical Club), if you pass the course, the subscription for 10 visits will cost 3800. If you make a whirlpool for the night, then a sweet strong sleep is guaranteed. At 11 am I could not lie down and fell asleep, but I did not feel like it either – I had a feeling that I was flying up – it was so easy and pleasant to walk in the sun. Great effect!