I, like many adults without self-control, do my doomscrolling on Twitter. Twitter, for those blissfully unaware, is a microblogging site known for its presidential tantrums, inscrutable memes and actual Nazis.

Who wouldn’t want to spend 4-6 hours a day on an app like that, mainlining alarming headlines directly into their Cerebral Cortex? I started the year determined to reclaim my time from this accursed bird app, but, unfortunately, Coronavirus had other ideas. By mid-March, I was spending whole evenings glued to my phone, eyes alight with an unending parade of infection rates, death tolls, and bleak news forecasts.

When I woke in the morning I’d roll over, reopen Twitter and scroll some more. It was bad. As a mental health writer who’s written a lot about the impact of social media on your state of mind, I knew better, but the abnormality of the situation had allowed me to convince myself that it was necessary to relax my own rules. These were unprecedented times and information = safety, right?

The term doomscrolling sounds like it should occupy space on a VHS cover of an 80s action movie, an Indiana Jones-esque blockbuster about ancient texts that, unless found and destroyed, could explode the moon. The reality is a lot less cool. Doomscrolling (or doomsurfing) refers to the endless consumption of bad, terrible, not good news via social media. 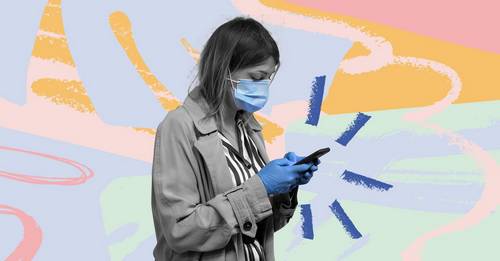 The earliest usage of the term I could find was back in 2018, when the world was still quite scary but we didn’t yet have to wear a mask to buy an avocado or swim through disinfectant to get a glimpse of granny waving out the window. This year, understandably, I’ve seen it used more often.

Twitter, for those blissfully unaware, is a microblogging site known for its presidential tantrums, inscrutable memes and actual Nazis.

Turns out: actually…quite…wrong? What I was doing was reading every prediction and every possibility and storing them as DEFINITE FACT in my mental hard-drive. I was reading global news as it broke, and then I was reading hundreds of people’s reaction to that news. Strangers’ suffering became my suffering, and I hoovered up panic in hours-long scrolling sessions. I felt burned out before lockdown was officially announced, getting pre-emptively angry at the ways other people weren’t taking this seriously, worrying about a national pasta shortage and dreaming I was chasing a single roll of toilet paper that I could never quite catch.

After a particularly testing weekend in July involving a viral tweet about Ben Affleck, I decided to go cold turkey on the whole operation. I deleted the Twitter app from my phone. This didn’t feel as momentous as I’d hoped so I binned Instagram as well. That felt better. I was free. All of that time I’d previously spent scrolling down terrifying news feeds was mine. What wonderful things I could do, I thought, as I walked to the front room and picked up the TV remote.

I’m not ashamed to say that it took some getting used to. For the first few days I still found myself absentmindedly unlocking my phone, readying my fingers to write an inane update about my day, or ask my followers if they thought rats have bad dreams or if they could beat Danny De Vito in a jelly wrestle. But slowly I felt better, lighter. I set aside time to mindfully catch up on the news. I read whole stories instead of just strings of terrifying headlines.

Bad news didn’t taint all of the day’s activities. In the absence of strangers calling me a b*tch, explaining my own jokes to me, or sending poorly lit d*ck pics, my mood greatly improved. I felt kinder and more patient. I was slowly shaking off the online disinhibition effect that had encouraged me to be mean and short-tempered on the internet.

We all like to think it’s only anonymous trolls who say things online they wouldn’t dare to in real life, but it can get us all. Often I stand by my rage. You still go to Heaven if you’re rude to bigots online and offline. But before my break, I was getting snappy indiscriminately. Exhausted and overextended and far too ‘online’ for my own good, I needed a break to reset.

In the absence of strangers calling me a b*tch, explaining my own jokes to me, or sending poorly lit d*ck pics, my mood greatly improved.

Now I’m back a few things are different. My phone sits across the room while I’m working and Twitter is no longer allowed into bed with me in the mornings. I don’t feel the need to comment on everything, and I mute annoying strangers instead of engaging. The aim is to use my phone more sparingly, not give up social media altogether. At its best, the internet can be a font of resources, mutual support, and pictures of otters in bowties, and for my part, I want to make an effort to occupy a digital space that does more good than harm, provides some respite from the doom and most of all makes Ben Affleck proud.

And how the hell do we stay cool when our office or WFH space doesn’t have air con?